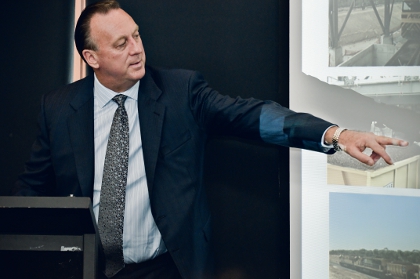 Mineral Resources’ director Chris Ellison has continued to reap extraordinary rewards from his stake in the highly profitable contractor, this week raising a further $41 million from share sales.

This week’s sale is the fourth big tranche of MinRes shares that Mr Ellison has sold since 2007, lifting his total proceeds from share sales to $156 million.

He is also the fourth MinRes director to complete a large share sale in the past month.

After all of his share sales, Mr Ellison retains 27 million shares in the company. With the shares currently trading at $12.03, his remaining stake is worth nearly $325 million.

That far outweighs the $57.5 million he paid in 2009 for iron ore heiress Angela Bennett’s Mosman Park mansion, in what was the most expensive residential property purchase ever recorded in Perth.

He was the founding shareholder of three mining and contracting business that were brought together in 1993 to form Mineral Resources ahead of its float on the ASX.

In its most recent results for the half-year to December 2011, the company lifted net profit by 33 per cent to $80.5 million.