Directors of Mineral Resources have survived a motion for a spill meeting after a second strike against their remuneration report today, as managing director Chris Ellison stood firm on mining the Jackson5/Bungalbin iron ore deposit. 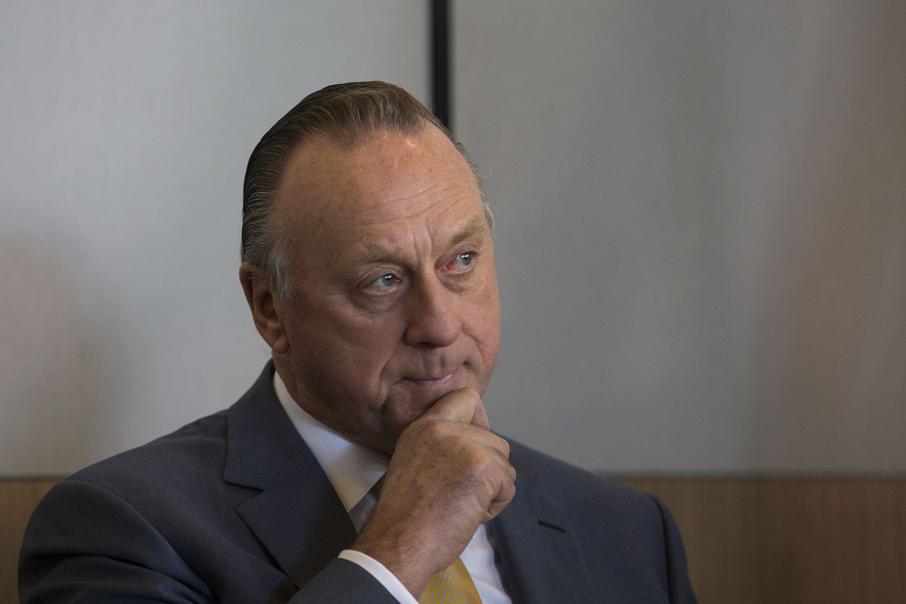 Chris Ellison says he plans to continue leading the company he founded in 1992 for at least 10 more years. Photo: Attila Csaszar

Directors of Mineral Resources have survived a motion for a spill meeting after a second strike against their remuneration report today, as managing director Chris Ellison stood firm on mining the Jackson5/Bungalbin iron ore deposit.

The remuneration reported received 58.5 per cent approval, with 41.5 per cent of votes against.

That is well above the 25 per cent 'no' vote threshold required to trigger a spill motion, and follows a 49.2 per cent vote against the report last year.

But despite the slap on the wrist for directors, a motion for a spill meeting was opposed, with more than 99 per cent of shareholders voting 'no'.

Chairman Peter Wade said he had held more than 40 meetings with investors and advisers to explain the remuneration system and discuss changes.

Those included moves to alter the vesting of long-term incentives.

Mr Wade said he made no apologies for paying Mr Ellison the right amount of money for doing the job.

Mr Ellison said he was planning to stay on leading the company he founded in 1992 for at least 10 more years, but he needed the people on his team to stay for long periods as well.

It was as tough as it had ever been to get good staff, he added.

Part of that was changing workplace culture- that as baby boomers moved on, the next generation was willing to give up earnings for lifestyle.

Those who would work hard needed to be rewarded, Mr Ellison said, appropriate pay for the leadership team would encourage them to work their way up the ranks.

He also criticised proxy advisers, which he said had a lot of power and made their decisions based on minimal research.

An example of the frustration, which he said was like a gravy train, was that MinRes would have to pay a fee to access the advisory reports.

Mr Ellison also responded to criticisms from a shareholder regarding the Jackson 5/Bungalbin East iron ore mines proposal, which had been knocked back by the Environmental Protection Authority.

The final decision would rest with the environment minister, he said.

“I want to mine that deposit,” Mr Ellison said.

“I’m not all about destroying the environment, we don’t do that; I support responsible mining.”

The project, which includes building two mines about 100 kilometres north of Southern Cross,  would support 420 jobs and earn about $80 million of royalties annually for the state government, he said.

The EPA had said that nearly 21 species of subterranean fauna that were only known in the area might be impacted by a mine, while the flora species Tetratheca aphylla would also be affected.

MinRes gave its strongest indication yet that it will build its own bulk ore transport system in the Pilbara, with a potential capacity that could be as high as 55 million tonnes per annum.

The 330-kilometre system would involve driverless shuttle trains, and construction could be begin as early as the third quarter of next year.

The first steps would be to build a five-kilometre test track and complete negotiations of a state agreement with the state government.

Such a network would take a an 18-month period to build.

It would feed into a new fully automated stockyard in Port Hedland, and would be operated by a separate infrastructure division, Mr Ellison said.

He said construction of the shuttle system would be at one sixth of the cost of a heavy rail line and would shave about $US20 per tonne off the cost of transporting the ore.