One of the state’s residential building hotspots, the northern corridor village of Ellenbrook, is entering its final phases, coinciding with its 20th year of development. 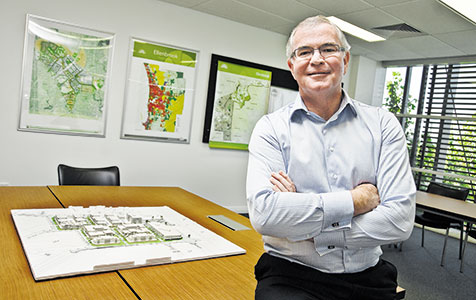 VISION: Danny Murphy has overseen the development of Ellenbrook from vacant land in 1994 to a thriving residential and commercial centre today.

One of the state’s residential building hotspots, the northern corridor village of Ellenbrook, is entering its final phases, coinciding with its 20th year of development.

The suburb has achieved a double-digit population growth rate in all but three of the past 10 years, well exceeding the greater metro area, which has hovered between 2 per cent and 3 per cent.

As well as the residential development, the Ellenbrook town centre comprises 30,000 square metres of retail space, including more than 100 shops, a tavern and two major supermarkets.

The project was the first large-scale joint venture between the Department of Housing and a private developer, LWP Property Group.

Mr Murphy told Business News the key lesson from Ellenbrook was the creation and maintenance of a clear vision that homebuilders and homebuyers alike were able to embrace.

“For example, affordability and sustainability have emerged as major criteria in the success of major projects.

“The Ellenbrook brand has retained currency over 20 years due to its design concept being timeless and appealing to a broad section of the community.”

At the official opening of the latest, and final, stage of development at Ellenbrook earlier this month, Housing Minister Bill Marmion said Ellenbrook had laid the ground work for the state government’s affordable housing strategy.

One of the features of the joint venture, Mr Marmion said, was that one in every 12 lots developed at Ellenbrook had been provided to the Department of Housing for social and affordable housing.

Construction at the final stage, Annie’s Landing, kicked off last year and is scheduled to be complete in 2016.

The estate is similar to the wider Ellenbrook area in that it offers buyers a range of home sites, from 150sqm cottage lots to sprawling 2,000sqm blocks.

That range has resulted in Ellenbrook becoming a hotspot for first home buyers, with 433 first home owners grants approved in the area in 2013-14, while the suburb has ranked in the top three across Perth for first-time buyers for the past 10 years.

“Innovation has been a feature of the development since day one,” Mr Darby said.

“This has extended from the joint local authority-developer fund to provide community facilities in a timely manner to the emergence of rear access cottage lots and variable building material use.

Mr Darby said Ellenbrook had stimulated significant development in the northern corridor, with the nearby suburb of Aveley commencing construction in 2004, while new suburbs Brabham and Dayton have also been created in recent years.