OPINION: Muffled by the drumbeat of election campaigning as Australia heads towards its May 18 poll is a more sinister noise, demands for a big cut in interest rates, or the dumping of “helicopter” cash on the community – or both. 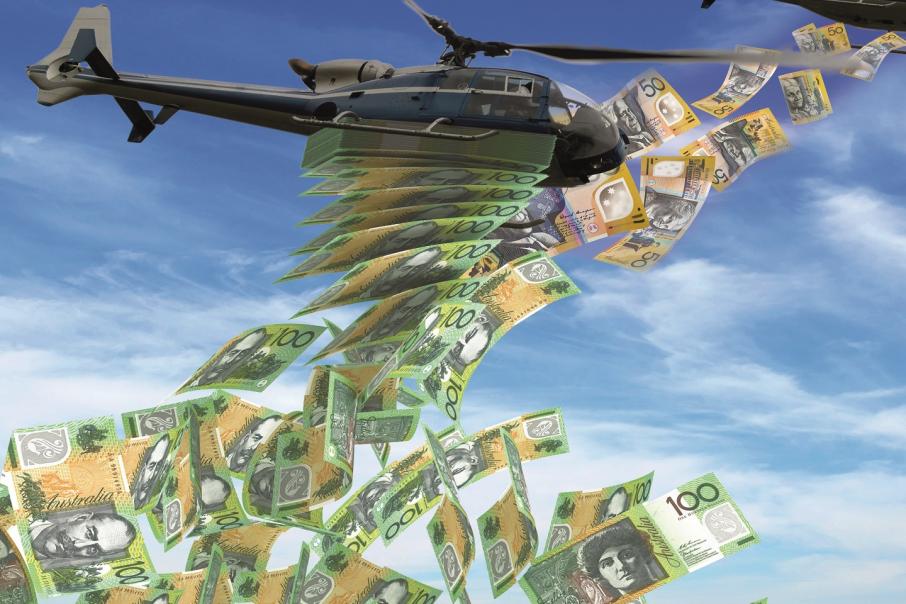 Muffled by the drumbeat of election campaigning as Australia heads towards its May 18 poll is a more sinister noise, demands for a big cut in interest rates, or the dumping of “helicopter” cash on the community – or both.

Little air time has been taken up by the possibility of an interest rate cut, and even less by the suggestion it’s time to hand out money in the same way the government of then prime minister Kevin Rudd did in 2008 at the height of the global financial crisis.

As far as most people are concerned Australia is not confronting an economic collapse as seemed possible 11 years ago, but that does not mean that something nasty is not brewing.

The first hint of what might lie ahead can be found in the east coast property price crash, which has made a lot of people poorer – and poor people don’t, or can’t, spend.

Western Australia too has had a property price crash but it’s been spread over five years, which has eased the pain, and apart from that, not many people in other parts of the country take note of what happens out west.

However, interest rate cuts and helicopter money, are national issues, and the fact that both are being discussed is a sign all is not well in the broader Australian economy, which appears to be teetering towards its first recession in 27 years.

What is happening on a national level over the past 12 months is what happened in WA on a state level in the years after the mother-of-all mining booms, a time when WA grew at double the national rate, wages skyrocketed, and property prices went through the roof.

Today, the crash is largely an east coast phenomenon, but that also means it’s much bigger than when WA was the lone falling star, and it’s much more of a political event because talk of an interest rate cut during a federal election campaign is not just unusual, it is a sign of how worried some people have become.

The event which triggered the latest calls for a rate cut, or a series of four rate cuts over the course of 2019, was the release last week of the March quarter consumer price index (CPI), which came in at zero, or 0.0 per cent, to use the official language.

On an annualised basis the CPI was 1.3 per cent, the lowest for three years and a measure of how the national economy is slowing towards a point when it might start going backwards, sliding into a period of so-called “negative growth”, or a recession.

UBS, a leading investment bank, was in no doubt about its interpretation of the low CPI reading, telling clients in a research note that was published just before the country closed for the Anzac Day public holiday that the case for the Reserve Bank of Australia to make a first cut of 25 basis points next month was “compelling”.

The problem with that suggestion is that an interest rate cut in the days before an election could be misconstrued by both sides of politics.

Labor would see it as the central bank doing the work of the Liberal Party, delivering a boost to voters and the property market just before the poll.

The Liberal Party would see it as a sign the economy cannot bear the weight of the tax and wage increases planned by Labor.

It’s the politics of the situation which will almost certainly cause the Reserve Bank to hold rates at the already low level, with the cash rate staying at 1.5 per cent, where it has been for three years.

But, it’s in the length of time that rates have been so low that the real problem lies because, in theory, low rates should have been encouraging strong economic growth and vibrant retail spending as the country continued to enjoy its longest ever period of expansion.

Whoever wins the election will inherit a doozy of a problem, because without an interest rate cut the property crash which has engulfed Sydney and Melbourne will worsen, causing property owners to feel even poorer, which means they will spend even less, feeding into a more widespread downturn.

Helping the property market might appeal to one section of the community, but it certainly will not be appreciated by savers, especially self-funded retirees who are already battling tough conditions with worse to come under a Labor government, which is targeting one of their tax breaks, franking credits.

It’s because interest rates are a double-edged sword, helping one side of the economy and harming another, that the Reserve Bank will be very careful in cutting too soon, or too deeply.

That’s when the helicopter money argument returns, a process by which the central bank simply dumps cash in the bank account of every taxpayer in the hope they will go out and spend, boosting the CPI and returning inflation to a target of 2 per cent to 3 per cent a year.

Citibank, an investment bank rival to UBS, reckons helicopter money is a better bet than interest rate cuts and while it is highly unconventional it gets money into the community almost overnight.

How Australia has got to the point of needing economic stimulus is a question earning even less air time than the rate cut-helicopter cash debate.

One possibility is that 27 years of continual growth has dulled the electorate into imagining that economic growth is easy and managing costs, such as power prices, is a problem for someone else.

Unfortunately, Australia has become a less competitive country at a highly competitive time with cheap labour in China one of the reasons for the loss of manufacturing, and the rise of international trading over the internet a killer of the local retail sector.

Chickens laid over the past two decades are coming home to roost, which is why some people think the election could be a good one to lose.

While the broader economy struggles to grow, there is a specialist sector which was supposed to be enjoying boom conditions but is not, lithium mining.

In theory, lithium production is a direct beneficiary of the drive into electric cars though investors are now discovering that there is no shortage of lithium around the world and that electric car sales are not as strong as forecast.

A sharp fall in the price of lithium over the past 12 months is testing some of the new producers such as local leaders, Galaxy Resources and Orocobre, which have seen their share prices drop by about 50 per cent since this time last year.

Too much lithium hitting the market is one side of the problem, consumer reluctance to buy electric cars in major markets such as China and Europe without hefty government incentives is another.

How Australian car buyers react to Labor’s proposals to encourage a shift to electric cars will be interesting to watch because overseas experience indicates consumers will be hard to convince without the government handing them a fistful of dollars at a time it can least afford it.