Developments in Canberra and in the west highlight the need for reform of electoral terms and electioneering while in government. 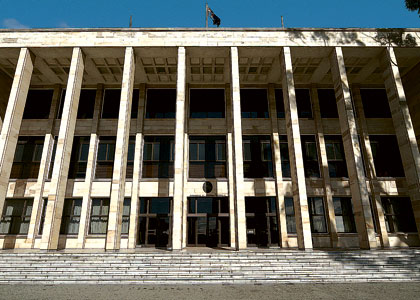 HOUSE CALLS: The Labor opposition has accused the Barnett government of stepping up its media spin.

Developments in Canberra and in the west highlight the need for reform of electoral terms and electioneering while in government.

IT was only one week ago that Prime Minister Julia Gillard broke with convention by naming the federal election date seven months early.

Her announcement of a September 14 poll, purportedly to deliver certainty, has delivered anything but.

Surely it could not be as simple as wanting to end the tedious speculation about polling dates that traditionally infects political analysis in the lead-up to an election?

The focus has moved on from those questions, because the prime minister has been swamped by bad news ever since her election announcement.

And the NSW corruption inquiry involving former powerbrokers and ministers Eddie Obeid and Ian Macdonald has continued to shine a damaging light on the way government used to be run in the so-called premier state.

It’s a very different story in the west, where parliamentary terms have been fixed and the election date is set for Saturday, March 9.

But the lead-up to the official election campaign in this state has been less than perfect.

For starters, the government has been spending an estimated $2 million on the 'Bigger Picture' advertising campaign - the type of promotional ‘information’ campaign that governments always seem to roll out.

Premier Colin Barnett has insisted all through January and into this week that the election campaign had not started and that he was just getting on with the business of running government.

Yet Labor’s treasury spokesman, Ben Wyatt, has accumulated a few interesting facts that shed light on the government’s activities.

“So far this year the Barnett government has released 127 media statements, compared with 56 in January 2012 – an increase of 127 per cent,” Mr Wyatt said last week.

“Over the past three months, the Barnett government has released an extraordinary 485 media statements, including a seven-day pre-Christmas gorge of 77 media statements announcing spending of over $822 million.

Mr Wyatt picked up on another trend that should have been apparent to all news editors – a flurry of good news announcements regarding Lotterywest grants.

“In the two months from December 2012 to date, the Barnett government has released 12 media statements attaching themselves to the good work of Lotterywest, with grants totalling $8.3 million,” Mr Wyatt said.

“This compares with the same time in 2011-12 when the Barnett government was only interested in grasping one Lotterywest grant in the amount of $241,415.”

Another issue raised by Mr Wyatt was the premier’s use of the government aircraft. He accused the premier of flying to Albany last week at taxpayers’ expense to launch a Liberal Party campaign.

Not so, said the premier, who insisted he travelled to Albany on government business.

While there, he attended a campaign “kick-off” for Liberal candidate Trevor Cosh but insisted he was not campaigning.

Underlying this issue is a debate over the ‘caretaker’ conventions that apply in the lead-up to elections.

Mr Wyatt has argued that the government should have gone into caretaker mode once the Legislative Assembly was dissolved last week.

Instead, the election campaign starts after the issuing of writs this week.

That should finally clear the air after a messy period of phoney campaigning.

But it does not satisfactorily resolve the issues that arise when incumbent governments use every opportunity (and resource) at their disposal to lift their electoral stocks.

As for Canberra, there is now a stronger argument than ever for fixed electoral terms for the national parliament.

It certainly won’t solve all our problems but it would be a useful reform.