Election is the people’s choice

Western Australians have a choice between flawed but strong leadership from the Liberals or an energetic, unproven alternative in Labor. 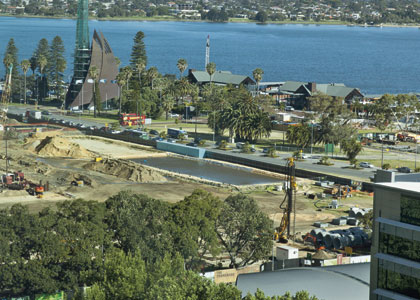 Western Australians have a choice between flawed but strong leadership from the Liberals or an energetic, unproven alternative in Labor.

WHEN Western Australians go to their local polling booth this Saturday to cast their votes, they will have two credible alternatives.

That’s a good thing for our democracy, whichever side of politics you sit on.

A strong opposition is a critical ingredient in good government, because it ensures ministers are closely scrutinised and helps to keep egos, and possibly hubris, in check.

But there can only be one winner -unless you are in Italy, where it seems there was no clear winner from that country’s recent national election.

Australians have a liking for strong, decisive government, and that is one of Premier Colin Barnett’s greatest assets.

In contrast to most politicians around the country, Mr Barnett generally gives a straight answer to a straight question - though that trait has been tested in this year’s campaign.

The risk for Mr Barnett is that ‘decisive’ becomes ‘arrogant’, and that ‘firm’ becomes ‘stubborn’.

His support for re-merging the state’s energy utilities certainly fits ‘stubborn’. And his interventionist role in the Oakajee and Browse projects was an odd look for a so-called free enterprise government.

For the most part, however, the premier has struck the right balance.

His most important ministerial colleague, Treasurer and Transport Minister Troy Buswell, is also credited with being firm and decisive.

He carries an enormous workload for the government and, following Christian Porter’s early exit, it is hard to see the Liberals running a functional government without his involvement.

The lack of depth among the Liberals is a worry, especially when they start to think about who might succeed Mr Barnett in four years’ time.

The dominance of the leaders means that most electors don’t get to see the rest of the team.

It means perceptions of Labor are dictated by perceptions of Mark McGowan, who has delivered many commendable policy ideas since succeeding Eric Ripper.

Mr McGowan has a solid team, including Ben Wyatt, Roger Cook, Ken Travers and Bill Johnston, and they will be important contributors, whatever the election outcome.

The Metronet rail proposal was, from an electoral perspective, an outstanding initiative.

It captured the public imagination, but the danger is that it will result in big infrastructure policy decisions being made in the heat of an election campaign.

As this newspaper has argued repeatedly, the state needs an overarching infrastructure strategy so that these decisions can be made after considered, informed analysis.

The big promises made during the election campaign will make it harder for the winner to rein in state debt, which has risen to a point where WA’s AAA credit rating is under threat.

That is arguably Mr Barnett’s greatest shortcoming, and it’s disappointing the Liberals still don’t have a clear plan to reduce state debt.

The failure to coordinate effectively with their alliance partner, the Nationals, is an added concern.

If the Liberals and Nationals form government together, as seems likely, they will need to decide what is really affordable.

The state can’t afford to deliver all of the promises they both made, especially when the Liberals are counting on Canberra to fund half the cost of three of its big promises.

The affordability of Labor’s promises is also questionable, especially Metronet, after adding in cost escalations and the likely need for extra tracks to Bayswater.

The biggest disappointment of Labor’s campaign was its resort to negative tactics.

Running a scare campaign on Troy Buswell’s potential future leadership and on possible privatisation is not admirable.

Enlightened Labor governments in the past have privatised state-owned assets where it makes sense, and that should remain an option.

Both sides could have focused more on small government. That doesn’t mean cutting departmental spending or abandoning those in need; it means removing outdated regulations, reducing overlap between the three tiers of government, outsourcing services to more efficient providers, and being smarter about the role of government.

Progress on these fronts would also help to achieve a better fiscal outcome, which would make tax relief more achievable.