Apartment developer Edge Visionary Living has added an 82-dwelling project in Subiaco to its burgeoning pipeline of works, with the firm continuing to find opportunities in a difficult multi-residential market. 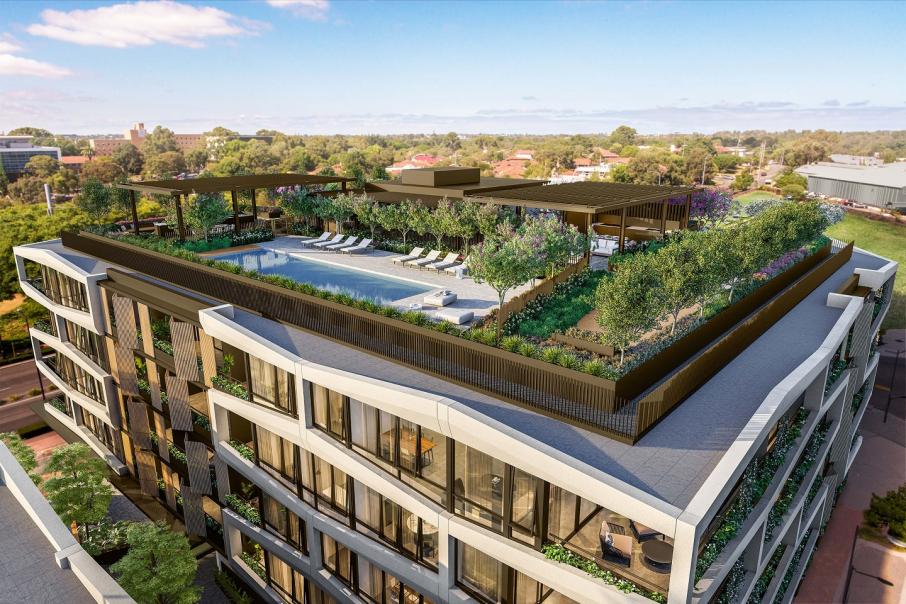 The Orchard Terrace project promises to be a lively addition to the Subiaco streetscape. Image: Hillam Architects

Apartment developer Edge Visionary Living has added an 82-dwelling project in Subiaco to its burgeoning pipeline of works, with the firm continuing to find opportunities in a difficult multi-residential market.

Edge and its architect partner Hillam Architects recently unveiled their latest project, known as Orchard Terrace, which is proposed for Wunderlich Road in the heart of the revitalised Subi Centro precinct.

Managing director Gavin Hawkins said the building’s design had been crafted specifically to match its location, with a rooftop orchard the inspiration for the project’s name.

Orchard Terrace will also feature a host of resort-style amenities, in keeping with contemporary apartment developments, including a sunset lounge, a yoga deck, an outdoor kitchen and a solar-heated pool.

“Orchard Terrace is the ultimate urban oasis, you are still close to all the action but can retreat to your sanctuary,” Mr Hawkins said.

“This is important for many buyers who want to be within walking distance of restaurants and cafes, but enjoy coming home to a peaceful haven.

“Over time, thanks to its lush greenery, the building will appear to grow and change with the seasons.”

Mr Hawkins told Business News the developer was seeking to leverage off its previous success in Subiaco, with final settlements complete at its Botanical project, which was built late last year.

“We are just trying to bring softness to Subiaco and suburbia,” Mr Hawkins said.

“So orchards and herb gardens – everything that we have picked up that people are wanting – we are incorporating into the design.

“This is for people who don’t want to be in a tower, this is 80 units, a similar size to Botanical, at a more competitive pricing point than Botanical – it is a more affordable entry into market.”

In February, the developer began construction of its $85 million Arthouse Apartments in Joondalup, being built by PACT Construction and set to become the tallest building in Joondalup at 17 storeys.

Edge followed that launch with a build start at its Eden project in Floreat last month, with construction being carried out by BGC Australia.

The developer’s Vantage apartment project in Rivervale is around 75 per cent complete.

Mr Hawkins said he expected to relaunch marketing at the Lumiere project in South Perth in the second half of the year, a development launched in 2015 but has been delayed due to ongoing uncertainty around planning reform in the near-city suburb.

Edge is also formulating plans after acquiring three adjacent plots in Applecross, in close proximity to the Raffles Hotel.

Mr Hawkins said that, like Orchard Terrace, Edge’s new projects would be pitched at the mid to high range of the market.

“We are focusing on the quality end where financing is less of an issue,” he said.

The next round of projects, however, was not as clear-cut, Mr Hawkins said.

“(Our pipeline) would indicate we have a fair bit on our existing plate,” Mr Hawkins said.

“There are going to be opportunities, there are always opportunities if you work hard enough to find them, but I think quite a few developers are pretty well set with their portfolios.

“Location is obviously important but you really have to have the right design, the right price point, the right marketing and the right sales team.”