Export growth has helped lift Western Australia’s economic performance above budget expectations, with gross state product up nearly 5.5 per cent in real terms over the 12 months to June 30, according to the Australian Bureau of Statistics. 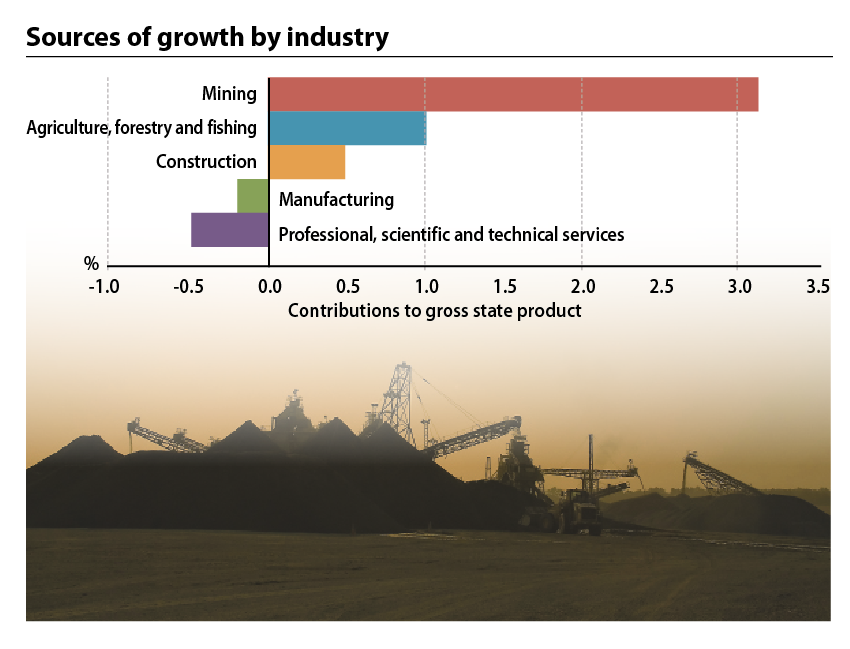 Export growth has helped lift Western Australia’s economic performance above budget expectations, with gross state product up nearly 5.5 per cent in real terms over the 12 months to June 30, according to the Australian Bureau of Statistics.

Despite a climate of gloomy predictions for the state, the rate of growth was second only to the Northern Territory (6.5 per cent), well ahead of the national average 2.5 per cent, and up on the 3.75 per cent outlined in the May state budget.

Gross state product measures the total value of production in the state’s economy over a year, similar to gross domestic product on a national level.

Exports were the key driver of growth, up 7.4 per cent over the year to $130 billion.

The size of the state’s economy is now almost $265 billion, more than one sixth of the national pie and slightly larger than that of Portugal.

Mining was the biggest contributor to GSP growth, at almost 3.1 percentage points, more than half of the 5.5 per cent increase.

Overall, mining represented nearly 30 per cent of GSP, at $78.7 billion gross value added, up from $66.5 billion in the previous financial year.

Professional services employs around 123,000 Western Australians and is responsible for 5 per cent of GSP, while manufacturing grew at a slower rate than inflation and contributed $12.6 billion.

In net terms, including imports, the state’s trade balance was up 11.2 per cent for the year, contributing almost two thirds of the growth in GSP.

This counteracted a fall in state final demand, which is the sum of all expenditure from residents within the state and fell 1.8 per cent on an annual basis.

Low official interest rates supported a surge in dwelling investment, which was up 11.1 per cent to more than $11 billion, and contributing 0.5 per cent of demand growth.

The Department of Treasury said inflation had been 3.3 per cent in WA over the year.

But gross household disposable income per capita, which Treasury suggests is a better measure of well-being, was only $52,962 for WA, suggesting non-residents earn a substantial portion of WA’s wealth.