Perth company Underground Services is targeting the coal-seam gas sector for further growth on the back of already burgeoning revenue. 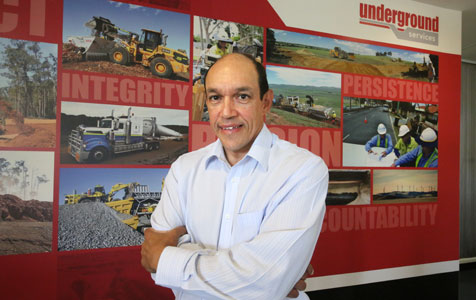 Perth company Underground Services is targeting the coal-seam gas sector for further growth on the back of already burgeoning revenue.

Annual turnover has grown from $13 million three years ago to about $80 million this financial year.

Supporting that growth has been a 150 per cent increase in employee numbers, with staff up to 200 now from 80.

“We looked at our history with those three key players in metropolitan Perth and asked ourselves how we could take the business to the resources sector; so we started knocking on doors,” Mr Abrahams said.

That ‘door knocking’ was successful, with contracts to lay pipeline and fibre for some of the state’s largest resources players – Rio Tinto, BHP Billiton and Alcoa among them.

Building on Underground Services’ strong recent growth, Mr Abrahams said the company was now aiming to win clients over with an invention he believes has changed the way pipe and fibre is installed.

The company’s engineers, including Mr Abrahams, have come up with a machine that lays pipe and fibre without the need to dig trenches.

Instead, he said Underground Services’ ‘EcoPlough’ machine – valued at $2 million each – required a team of eight at most.

The machine uses a plough-like method to simultaneously lay the pipe or fibre under the ground and cover it with material, such as sand.

Mr Abrahams said as well as reducing the number of workers needed on a project, the EcoPlough more than halved the time taken to do a job, decreased costs by about 40 per cent, and improved safety.

And that doesn’t take into account the reduced environmental impact, with the EcoPlough requiring a working corridor of just 10 metres compared with the 25-metre working corridor needed for the conventional method.

While the idea of trenchless technology is not new, as other players do similar work laying pipe, Mr Abrahams said it was the “secret weapon” invention that allowed a range of materials (fibre, water pipes and gas pipes) to be laid that made the Underground Services offering unique.

He said the next step was to further automate the process.

The technology has been proved through contracts with Western Power, Alcoa, and Rio Tinto, and Mr Abrahams said the company was now looking to position it within the coal-seam gas sector on the east coast.

“We’ve spoken to all the main players over there; it’s mainly door knocking and trying to convince people,” he said.

“It’s a challenge. It would be the same in WA; if I was operating in WA and you were a Queensland contractor, I’d do my best to keep you out of my territory.”

Mr Abrahams said Underground Services had benefitted from being taken over in 2009 by the Cardaci family’s CFC Group, which also holds Centurion, JCB Construction Equipment, and, as of last year Cape Crushing and Earthmoving in its portfolio.

He said the CFC ownership had given Underground Services more pulling power, as well as the larger company being a logistical aide due to the other CFC businesses being based on the east coast.