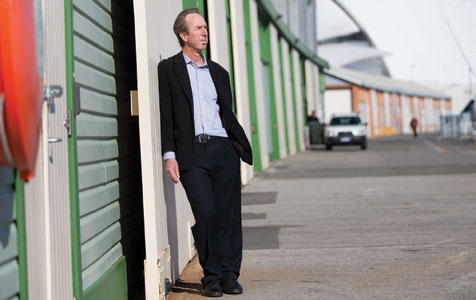 The Totally Huge New Music Festival offers an insight into how far performers can push the boundaries of audio art.

Constant innovation is the key to successfully promoting ‘New Music’, a genre as diverse and unique as its many followers worldwide.

Ranging from the radically experimental to more contemporary sound and musical works and all things in between, New Music is a genre that is difficult to classify, which is why Tura New Music CEO Tos Mahoney knows he has to be on top of his game to get the message out to the masses.

Managing the digital delivery is one aspect of the challenge faced by the Perth-based not-for-profit organisation, the only independent organisation that promotes this genre of music in Australia.

Due to the geographically dispersed nature of its niche following, it is essential for New Music to have an online presence; however there is also the threat of the internet reducing the demand for live performances.

Mr Mahoney, who is also artistic director of the upcoming Totally Huge New Music Festival, understands the need to constantly innovate in order to manage this issue.

“There’s a uniqueness about an actual live event both for the performer and for the audience,” Mr Mahoney told Business News.

“I think it’s always that challenge to find how you can present the new in new ways for an increasingly sophisticated audience that doesn’t just want to roll up to a hall and have something performed at them.”

A recent move in the digital direction is the creation of the WA New Music digital archive currently being compiled by Tura and Edith Cowan University.

Without doubt, though, the online music offering is complementary to the live performance aspect of the genre.

The 11th annual Totally Huge New Music Festival is pushing the boundaries in this area this year, particularly with US artist Alvin Curran and his piece ‘Maritime Rites’.

To be performed at the heritage-listed B Shed at Victoria Quay in Fremantle, Mr Curran will be using samples of sounds associated with ships and harbours alongside the live atmosphere of the Fremantle port to create his musical work.

Creating a line-up for a festival featuring such eclectic music is another challenge faced by Mr Mahoney, who must balance the needs of artists and followers of the genre with those of newcomers to the genre.

“It’s really about … getting the balance between showing what’s happening at the edge, but also creating pathways for people to get to the edge, because what’s accessible to one person isn’t necessarily appealing to others, so it’s about creating a range,” Mr Mahoney said.

In addition to the unconventional work of Mr Curran, the West Australian Symphony Orchestra will be performing its Latitudes Concert Series, which involves several unique, contemporary pieces that integrate other genres and styles into orchestral music.

Melbourne-based group Speak Percussion, best known for its inventive ways of combining percussive instruments with other sound elements, will be collaborating with Japanese sound artist Haco.

Totally Huge this year will be held in conjunction with the annual International Computer Music Conference (ICMC), the first time the conference has ever been held in the Southern Hemisphere.

The International Computer Music Association was formed in 1974 to bring together composers, engineers, researchers and musicians who specialise in this form of electronic music.

The conference acts as a hub where international computer music aficionados can come together to network as well as share their art and academic ideas.

The conference has previously been held in a number of cities throughout the US, Europe and Asia.

Founded in 1987 under the name of EVOS, Tura operates as a producer and resource centre for New Music and administers a variety of music programs throughout the state.

Its programs include Regional Residency, which exposes isolated communities to New Music, and Club Zho, aimed at showcasing local talent at a range of venues.

“It was set up to be a support and infrastructure for a variety of New Music practitioners because there was none, and it did that really well,” Mr Mahoney said.

“It was a case of there was a lot of energy and wind behind the sails for the first five to seven years, but it actually achieved what it was meant to be doing.”

The organisation’s new structure was developed in the late 1990s.

Tura New Music is sponsored by the Australian subsidiary of French energy and petroleum company Total and its regional programs are supported by remote electricity provider Horizon Power.

Totally Huge New Music Festival will be presented in venues throughout the Perth Cultural Centre and Fremantle from August 9-18.