Henderson-based superyacht builder Echo Yachts takes a different approach to most manufacturers – its workers have been told to slow down, and now they are setting records. 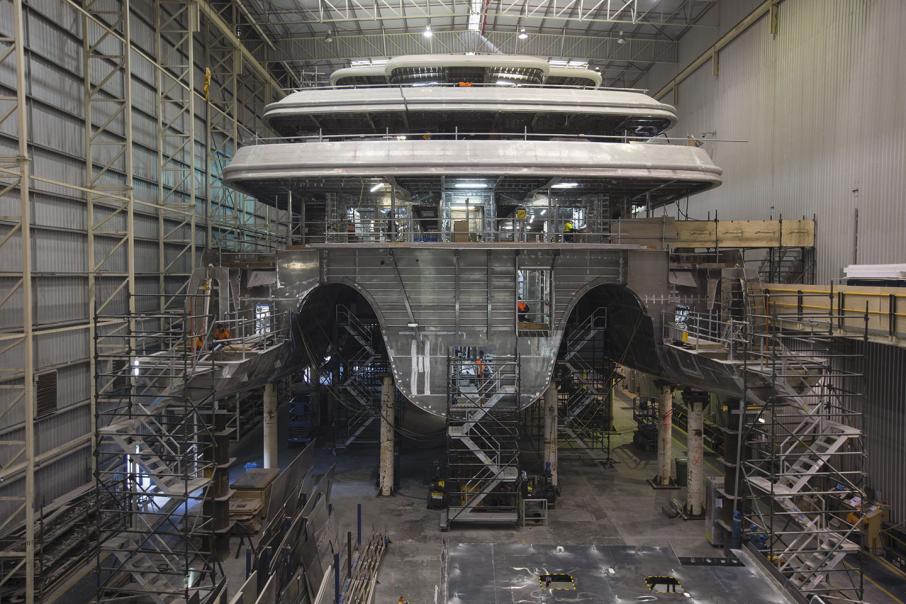 AHOY: Work is under way on White Rabbit Golf, the largest superyacht ever built in Australia. Photo: Attila Csaszar

Henderson-based superyacht builder Echo Yachts takes a different approach to most manufacturers – its workers have been told to slow down, and now they are setting records.

Echo Yachts is a rarity in Western Australia – a niche manufacturer growing its business by targeting export sales to a wealthy international clientele.

Echo, which is a finalist in this year’s Rising Stars awards, is building two superyachts for one client – an 84-metre trimaran with every imaginable luxury, and a 46-metre support vessel with a helicopter and 11 watercraft.

The work undertaken by Echo builds on the shipbuilding expertise developed in WA over the past 25 years, through companies like Austal, Oceanfast (which was bought by Austal), and Wavemaster International (which no longer operates).

This accumulated expertise also explains why German industrialist Guido Krass selected Henderson as the base for his low-profile superyacht company, Hanseatic Marine.

Hanseatic (which has been branded SilverYachts since 2014) has completed four superyachts since opening its doors in 2005 and is currently working on a fifth vessel.

It has the benefit of a wealthy owner who self-funds each vessel, before selling or keeping them.

Echo, by contrast, has to manage challenges like a fluctuating currency, variable labour costs and an uncertain order book – factors that historically have plagued the ship building industry in WA.

Echo, which was established in 2014, works closely with sister company Evolution Commercial, which opened for business in 2010.

Jurien Van Rongen and Mark Stothard, who have extensive experience in the industry, are directors and shareholders of both companies.

“In our first three years of business we tripled our turnover every year,” Mr Van Rongen said.

“We did a lot of work for the Gorgon project and the marine operators up there.

“When the jetty was getting finished, it was like the tap was turned off.

“We went from having a massive amount of work to almost nothing.”

That changed again in 2014 when the group struck a deal to build the two superyachts currently under construction, reportedly for Singaporean businessman Goh Hup Jin.

Mr Van Rongen believes Echo has stamped itself as a market leader.

“We’re probably the most innovative company in shipbuilding in Australia,” he said.

“We’re the only shipyard that can build in steel, composite and aluminium, from commercial to superyacht level.”

The group has gone from 50 to 300 employees in the past 12 months, and over that time has improved its safety incident rate and maintained very low turnover.

Mr Van Rongen said one of his goals was to bring the glory back to building superyachts.

“That’s really evident in the last three vessels that we’re delivered – two to Denmark and one to Taiwan.

“They’ve just finished their warranty period and the claim on all three vessels was zero, not one dollar, and I’ve never had that before.”

“There’s plenty of work that is very close to signing at the moment, so there will be continuity,” he said.

The group was also pursuing contracts for commercial vessels, refit and repair work for the oil and gas sector, and conversions of workboats into ‘explorer’ yachts (see here).

“We’re new to that, but we can certainly contribute substantial portions to projects,” he said.

“The government said they are going to spend $189 billion on new vessels and sustainment, and most of the sustainment is going to be done here in Western Australia, so that’s a great opportunity for us.”