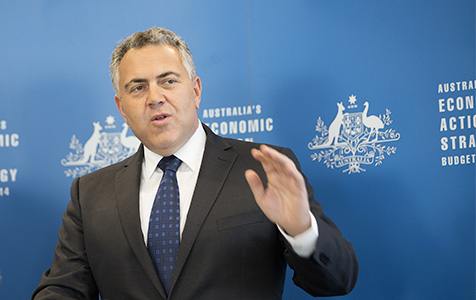 Treasurer Joe Hockey has said that the current distribution fails the fairness test.

The comments came as the treasurer handed down the Commonwealth Grants Commission's review of the national GST distribution mechanism.

Nonetheless, the commission recommended WA's share of the distribution continue to fall to just less than 30 cents for every dollar raised in the state.

The commision's proposed distribution for the coming financial year meant Western Australia would earn around $300 million less than last year, despite the total national pool increasing by almost $3.5 billion.

It is understood Mr Hockey proposed a floor for WA's distribution at its current level of 38 cents in the dollar, but that would come at the expense of reduced increases in revenue for the other states.

The idea was shot down by interstate treasurers, who argued that WA had not undertaken difficult economic reforms, such as deregulation of trading hours.

Mr Hockey said it was a complex issue and he agreed that WA should embrace reform, but argued that the distribution as it stood would fail to meet standards of fairness for most Australians.

He added that he was concerned for the health of the federation, and that he would continue to consult in pursuit of consensus between states on the issue in the coming week.

Pressure for an improved deal will continue to mount on the federal government, after recent polling revealed a swing of around 11 per cent that would batter the coalition's stocks in WA if a federal election were held today.

A uniform 11 per cent swing would result in the loss of almost half of the federal Liberal Party's lower house seats in WA, with Hasluck, Swan, Stirling, Cowan and Pearce in danger, while Canning would be lineball.

It would also make victory in the state's new seat, which is yet to have its boundary set, very unlikely.

In the lead up to today's meeting of state treasurers, WA Treasurer Mike Nahan said the state would pull back from cooperation with other states if a reasonable deal was not achieved.

Dr Nahan said that the system was so distorted that the state government was effectively borrowing money to hand over to other states through the horizontal "equalisation" measure.

Yet interstate treasurers, whom between them receive billions of dollars of redistributed revenue generated in WA, claimed it was WA that was being unfair.

Tasmanian Treasurer Peter Gutwein said he had no interest in helping WA fix its budget problem, and said he would not allow Tasmania's GST revenue to be used to do so, despite the fact that Tasmania this year received around 60 per cent more through the distribution than it pumps into the system.