Earbus gets the message out

The Earbus Foundation of WA has been recognised for its charity work and business structure. 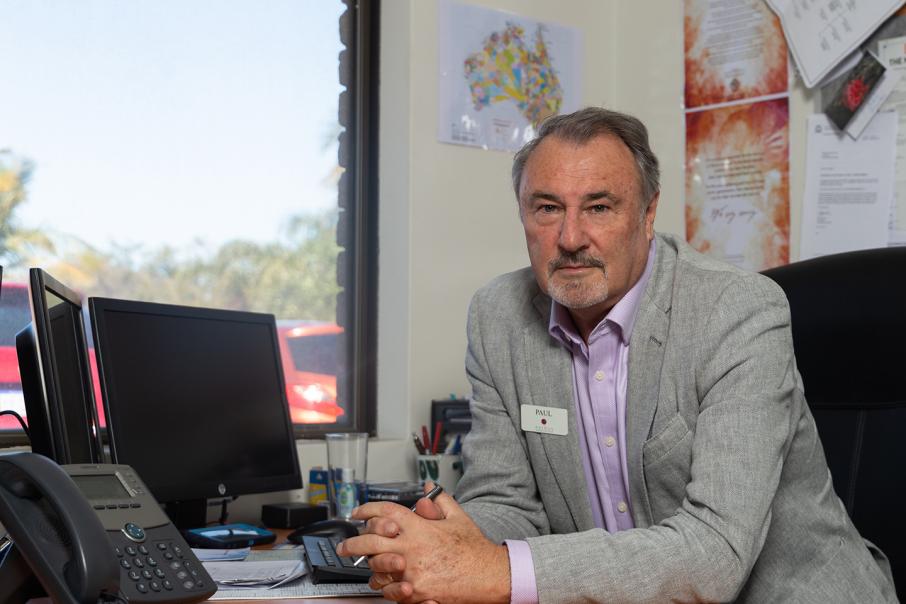 Paul Higginbotham says Earbus is being recognised for its work with Aboriginal children. Photo: Gabriel Oliveira

The Earbus Foundation of WA has been recognised for its charity work and business structure.

A chronic disease continues to affect some of Australia’s remote communities eight years after a Senate enquiry found that Aboriginal children have the worst ear health of any people in the world.

In 2008, the Australian Bureau of Statistics found the prevalence of middle ear disease in Aboriginal children was 10 times that of non-indigenous children, while a 2009 report by Access Economics found a total health system expenditure of $391 million per year on the disease.

Twelve years after the first Earbus was launched by paediatric specialist and University of Western Australia clinical professor Harvey Coates, current chief executive Paul Higginbotham said the non-profit Earbus Foundation of WA was working to make an impact on the ear health of Aboriginal kids across the state.

Mr Higginbotham told Business News that children with the disease often lived in an environmental ‘fog’ and became isolated.

“If your hearing’s not there at critical moments of your development as a child, the impact can be long-lasting.”

Despite the disease being easily treatable, Mr Higginbotham said the physical and close-contact play style of Aboriginal children meant it was also quickly spread, with the chronic condition resulting in an inability to learn and engage, and the potential for sustained hearing loss.

Having started as a program run through Variety WA in 2006, Earbus emerged as an independent organisation in 2013, and screens, monitors, and treats children from mobile clinics.

The busses started out servicing the Pilbara and Goldfields, with the service fully operational within eight months.

Initially, more than 50 per cent of Aboriginal children Earbus saw had ear disease.

Earbus has 31 employees, and has grown its beat to service the South West.

According to its most recent annual report, Earbus received income of $2 million for the 2017 calendar year, with expenditure of $1.7 million. 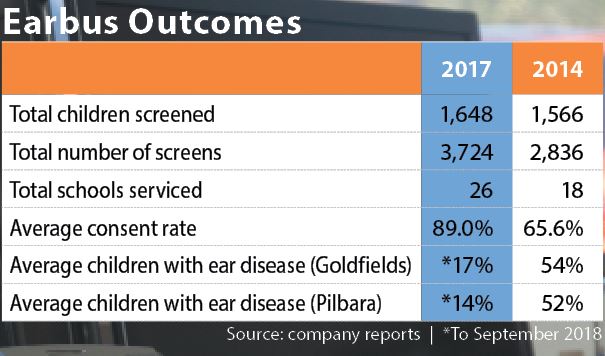 State and federal governments provided 68 per cent of this income, 15 per cent came from grants and donations, sponsorships amounted to 5 per cent, and the remaining 12 per cent came from fees charged for service provided at its Perth office and through other audiology contracts.

Mr Higginbotham said cost effectiveness was an essential part of the Earbus business strategy, telling Business News that the team constantly measured expenditure in order to direct as much as possible towards essential services.

In addition, he said the not for profit conducted a statistical analysis after every community visit, and used this to continually report on and improve its service.

This allowed for a constant reflection on the effectiveness of clinical methods being used, and informed decisions around the use of funds.

Mr Higginbotham said this was also a primary method of providing stakeholder value, proving that impact was being felt in Aboriginal communities.

He said Earbus had always been committed to making a sustainable impact in communities, and this meant a commitment to ongoing collaboration.

It could take as long as six to nine months to gain the trust of a community, Mr Higginbotham said, by allowing Aboriginal elders to watch treatment, and continually listening and responding to questions and concerns.

“Communities are quite rightly wary of people coming in for other purposes than the wellbeing of kids and families.”

Mr Higginbotham said the children themselves often drove community engagement, given the improvement in their own health as well as the health of their friends.

“We put a lot of emphasis on the kids having a good time, enjoying themselves, and feeling safe and welcome,” he said.

“It sounds crazy, but we’ve got friendships all over the state with kids, when they see us they come running out.”

Among the accolades Earbus has received for its work are: winning the social change maker category at this year’s Testra Business Awards; the 2017 emerging business excellence category in the AIM WA West Business Pinnacle Awards; and the 2016 community group of the year award in the WA Regional and Community Achievement Awards.