Accounting giant EY is understood to be close to finalising negotiations on a new lease at the six-storey EY Building on Mounts Bay Road, after coming up empty in its search for a new home. 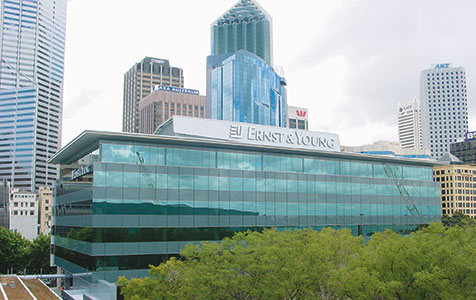 EXTENSION: EY is understood to be close to signing a new lease to stay at its Mounts Bay Road home. Photo: Tim van Bronswijk

Accounting giant EY is understood to be close to finalising negotiations on a new lease at the six-storey EY Building on Mounts Bay Road, after coming up empty in its search for a new home.

The financial services firm’s lease on 7,500 square metres of the building, which is owned by international property investment firm Brookfield Office Properties, expires in November 2016.

It is understood EY will call Mounts Bay Road home at least until 2023 under the renegotiated deal.

EY went to the market in August last year with a request for proposals for 10,000sqm of office space, with a number of city towers and potential building sites touted as alternatives.

Industry sources suggest Leighton Properties’ Kings Square development and Georgiou Group’s proposed Milligan Square tower would have come under close scrutiny from EY, as would have the second office building at Brookfield Place or options at Elizabeth Quay.

A proposed $140 million, 12-level office tower on Murray Street by Luke Saraceni’s joint venture with Sirona Capital, Westbridge, was also understood to be a potential landing spot for EY, along with the $60.4 million, 15-level 32 St Georges Terrace tower currently being built by Probuild on behalf of developer Crownbase Capital.

Nearly 25 per cent bigger than its nearest WA rival, PwC, EY’s 680-strong Perth practice would have been highly sought after by developers.

Industry sources have tipped Rio Tinto to be the most targeted anchor tenant for commercial landlords, with the resources giant expected to consolidate its considerable office requirements in the near future.

Rio Tinto’s teams are currently spread across 12 buildings, with most of its leases set to expire in 2017.

The past year has been historically quiet for major leasing deals in Perth’s CBD office market, with analysts at Savills recording 117,790sqm of activity in the 12 months to the end of March, a 24 per cent fall on the previous year.

Major leasing deals completed in the first quarter of 2014 included: law firm Jackson McDonald and insurance group Marsh taking up 3,953sqm and 1,134sqm, respectively, at 225 St Georges Terrace; the Australian Bureau of Statistics leasing 3,058sqm at the Durack Centre at 263 Adelaide Terrace; and Pioneer Credit signing on for 1,644sqm at the former Bankwest Tower at 108 St Georges Terrace.