The Environmental Protection Authority has rejected a bid to rezone land in Port Hedland which LandCorp had earmarked for its proposed $152 million Spoilbank Marina development. 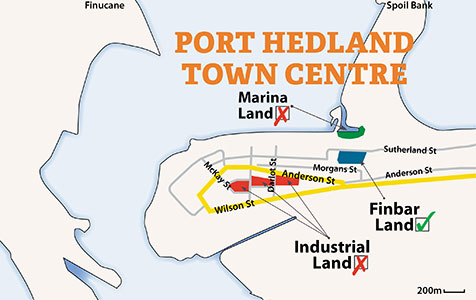 The Environmental Protection Authority has rejected a bid to rezone land in Port Hedland earmarked by LandCorp for its proposed $152 million Spoilbank Marina development.

The Town of Port Hedland had hoped to rezone a 60-hectare site north of Sutherland Street to a 'marina development' zone, which would provide for public marina uses as well as commercial and residential development.

However the EPA refused the town's request for a scheme amendment, saying the site was within an area that was exposed to higher than normal levels of dust, including tiny particles that have been linked to health risks.

It said it would not support the amendment until a formal assessment of the health risks of Port Hedland dust was completed.

The assessment is under way but is not expected to report until next year.

The state government has pledged $112 million in funding towards the project, with the Town of Port Hedland chipping in $40 million.

It is the second time in six months the EPA has opposed town scheme amendments in Port Hedland due to environmental concerns.

Last year it knocked back separate town planning scheme amendments relating to another nearby development site.

That amendment was aimed at rezoning industrial land to permit hotels, motels, serviced apartments and other commercial uses.

The EPA did not impede amendments to the town's planning scheme, however, which allowed developer Finbar Group to proceed with a $400 million apartment project overlooking the proposed Spoilbank Marina.

It is understood the authority obtained mixed advice on the amendment which enabled the Finbar proposal.

EPA chairman Paul Vogel said the departments of state development, health, environment regulation and planning had advised that they did not support the progression of the amendment related to the marina proposal before the results of the health risk assessment were released.

"As with its decision in 2013, the EPA has taken a precautionary approach with respect to rezoning land in the west end to land uses that would potentially increase the short or long term residential population in these areas," he said.

Dr Vogel said the Town of Port Hedland could revisit the scheme amendment once the results of the health risk assessment were known.