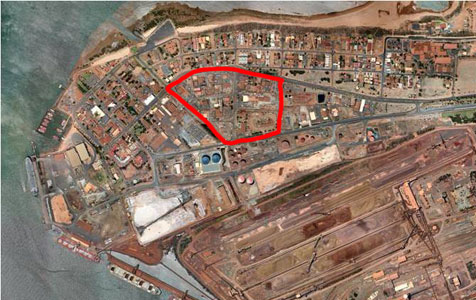 The area subject to the proposed scheme amendment, near the Port Hedland town centre.

Efforts to boost residential and commercial development in Port Hedland have hit a hurdle, with the state environmental regulator rejecting a proposal to re-zone industrial land over concerns regarding dust exposure.

The Town of Port Hedland had been seeking to amend its town planning scheme to allow short-stay accommodation and commercial buildings to be constructed on land south of Anderson Street and west of Darlot Street.

However the Environmental Protection Authority said today that an amendment could not be granted until the findings of a study into the potential impacts of dust were released.

“The lots in question are close to port operations, including iron ore stockpiling and ship loading,” Dr Vogel said.

“This scheme amendment is aimed at rezoning this industrial land to permit hotels, motels, serviced apartments, as well as commercial, health, community and entertainment facilities.”

The results of the study, which is being conducted by the Department of Health and the Port Hedland Dust Taskforce, are not expected to be available until the end of 2015.

“Until more is known about the potential impact of dust, the EPA has determined that the scheme amendment is environmentally unacceptable,” Dr Vogel said.

The decision may not augur well for two significant LandCorp developments proposed for construction a few streets away.

Apartment developer Finbar was appointed by the state lands agency to plan and construct a $300 million complex on Sutherland Street in July last year, on the former site of the Port Hedland Regional Hospital, while national developer Mirvac was also selected in August 2011, for a $125 million hotel and residential development in Port Hedland, also on Sutherland Street.

LandCorp and the Town of Port Hedland are being sought for comment.