The state government’s proposed $2.2 billion Forrestfield-Airport rail link has been recommended for conditional approval by the Environmental Protection Authority. 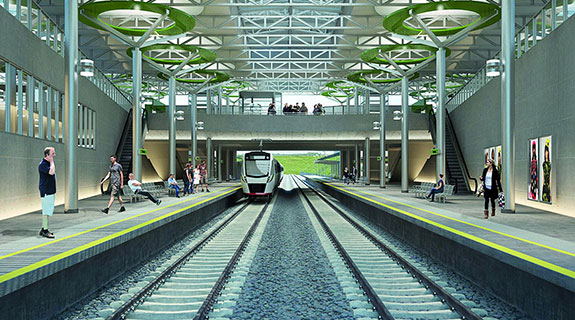 An artist's impression of the Forrestfield train station.

The state government’s proposed $2.2 billion Forrestfield-Airport rail link has been recommended for conditional approval by the Environmental Protection Authority.

It also includes a realignment of Dundas Road, cross passages and emergency exits.

EPA chairman Paul Vogel said the potential environmental impacts on flora and vegetation at the Forrestfield station were identified as the key factor requiring evaluation.

“The proposal directly impacts on the ‘Banksia woodlands over species rich dense shrublands community, identified as a threatened ecological community because it is very restricted,” he said.

Dr Vogel said the proponent had adequately informed the EPA why it couldn't avoid the shrublands, and was committed to providing an offset to mitigate the environmental impacts.

“As a result of the EPA’s assessment of these potential impacts, we were able to conclude that the proposal could be managed to meet our environmental objectives, subject to the implementation of several conditions,” he said.

One of the conditions involves forming an offset strategy to counterbalance the loss of 1.6 hectares of the threatened ecological community.

As part of the project is on Perth Airport land, it is subject to a separate assessment and approvals process under Commonwealth legislation and did not form part of the proposal assessed by the EPA.

In April, Business News reported that three consortia had been shortlisted to bid for the project.