ENJO looks to clean up USA

Environmentally-friendly cleaning products supplier ENJO has teamed with corporate advisory firm Azure Capital to embark on an expansion of its business to the United States. 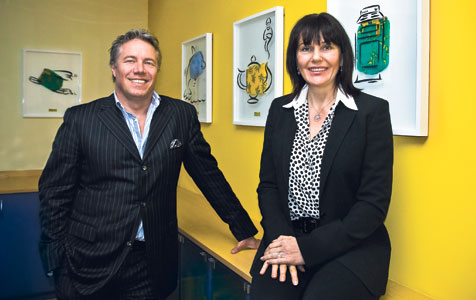 ENJO founder Barb de Corti with Damian Pike, who will head up the cleaning products supplier's US division.

Environmentally friendly cleaning products supplier ENJO has teamed with Perth-based corporate advisory firm Azure Capital to embark on an expansion of its business to the United States.

Zabada will sell microfibre cleaning products in the US using the same technology as the ENJO brand, which is now found in 20 per cent of Australian homes.

The products bound for the US, however will be exclusively available via the internet, a departure from the direct sales model used to promote ENJO in Australia.

Ms de Corti said the aim was to have Zabada products in 10 per cent of homes in the US within five years, potentially tripling the size of the ENJO business in Australia, which turns over more than $100 million annually.

The online nature of Zabada will allow the business to be run and managed from Australia, with Mr Pike to head up the US-based division as chief executive.

“It’s so much easier than when we started out in Australia, because everything had to be done through in-house demonstrations,” Ms de Corti said.

“In a new market, instead of having to focus on bringing people in who can then go out and demonstrate the product, we really can rely on online, which is very exciting.”

Ms de Corti said Zabada would initially be launched in the San Francisco Bay Area, a region considered to be at the forefront of environmental awareness.

“If you look at what they’ve done in the environmental area, it really is astounding compared to the rest of the world,” she told Business News.

“They are extremely progressive and it is the ideal market for us to launch.

“But the US market has not really been advancing in any way, shape or form when it comes to environmentally friendly cleaning.

“Having been over there quite a bit and watching the news and so forth, I thought they desperately need our product, because it is a real game changer.”

Ms de Corti said the expansion plans had been considerably boosted by the participation of Azure Capital and its managing director Geoff Rasmussen.

“It gives you the confidence that what you are doing has legs,” she said.

“Azure has worldwide experience and they were able to help us out immediately finding out who to approach in the United States, what banks to go with and what lawyers to use and how to set the company up.

“It was a great relationship, obviously they are providing finance, but also their knowledge is something we haven’t got.”