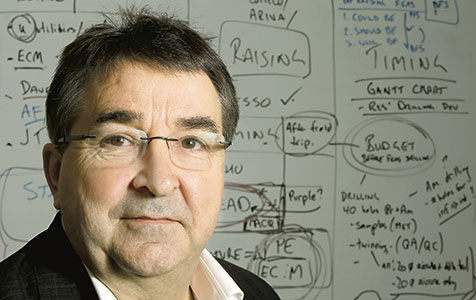 NEGOTIATING the often-rocky terrain of the environmental approvals process can be a daunting task for emerging miners, particularly those in the uranium space.

It is perhaps not surprising, then, that emerging uranium company Energy and Minerals Australia has appointed a chief executive with considerable experience in negotiating with government.

In his former role as head of government relations at Fortescue Metals Group, Julian Tapp says he acted as “kind of a troubleshooter”.

“I would say there’s sometimes an art of dealing with it but regulators aren’t there to make life difficult for you, they’re actually there to do a job,” Mr Tapp told Business News.

“If you can put yourself into their shoes and say ‘this is what they’re actually worried about and we collectively can solve these problems by doing these things’, you’ll find you get your approvals much quicker.”

In addition to Mr Tapp, EMA has appointed a high-profile chairman in former BC Iron managing director Mike Young, who successfully steered the iron ore miner to significant growth since founding the company in 2006.

EMA is one of several prospective uranium miners in Western Australia, alongside Toro Energy, Paladin Energy and Energia Minerals.

With Toro finally securing federal environmental approval for its Wiluna project last month after a number of delays, the key challenge facing these miners is a uranium spot price, which has plunged since reaching highs of $US130 per pound in 2007.

The spot price climbed to a recent peak of $US64/lb at the beginning of 2011 but dropped in the wake of the Fukushima nuclear disaster in Japan two months later and currently sits at just $US40 per pound.

This is well below the $US70 per pound generally thought to be the necessary benchmark for production.

An economist by trade who has specialised in forecasting for companies such as BP and Ford, Mr Tapp believes the strength of China’s projected reactor build program is cause for confidence.

“Contrary to what some people would have you believe, the net creation of reactors is quite strong and it’s going to grow over the next 10 years,” Mr Tapp said.

“The fundamentals are that the supply is less than the demand is, and my view would be sometime between now and 2017 the price is going to go up enough to bring new mines in.”

EMA’s central focus is its Mulga Rock project, located around 240 kilometres north-east of Kalgoorlie. Initial drilling uncovered an inferred resource of 62 million pounds from four separate deposits and the company hopes to produce about 1,400 tonnes of uranium concentrate per year.

A positive aspect of the remote location of the Mulga Rock site is that it removes “a whole chunk of potential difficulty” from the approvals process, Mr Tapp said.

“It’s so arid and barren that it doesn’t support enough animal life for people to live there, and there’s no water,” he said.

“We already have the mining licences issued and there was no Native Title.”

A key challenge for EMA will be securing capital in a competitive market.

While EMA’s convertible note holders Acorn Capital, Macquarie Bank and Element Resources Fund have agreed to extend the deadline for a $15 million equity raising from March to September this year, Mr Tapp acknowledges the market is difficult at the moment.

He said EMA’s immediate focus would be on completing further drilling and metallurgy work with the aim of preparing a Public Environmental Review by the end of the year. The company hopes to make an investment decision around the middle of 2015 before starting construction and production in 2016.