INCREASING demand for student housing has prompted a number of Perth universities to commit to expanding their on-campus accommodation. 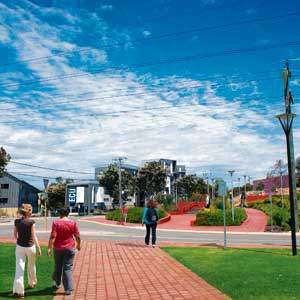 INCREASING demand for student housing has prompted a number of Perth universities to commit to expanding their on-campus accommodation.

The proposed 355-bed building will include a mix of one-, three-, four- and five-bedroom apartments, resident common areas, a pool, landscaping and a cafe.

The new development will boost accommodation numbers at ECU Mt Lawley to more than 500, bringing total on-campus capacity to more than 700 across all campuses.

It's estimated the new accommodation will be ready by the start of 2011, subject to planning approval.

ECU facilities and services director Brian Yearwood said student accommodation had become scarce around the Mt Lawley campus and the university determined that an additional minimum of 300 beds were required.

Following a public tender process, CLV was selected based on its design and construction of the new accommodation, the ability to manage new operations, and its financial model.

Under the partnership, CLV will also take on the management of all existing student accommodation at ECU's Mt Lawley, Joondalup and Bunbury campuses.

"The university's core business is teaching, learning and research. This partnership with CLV provides the opportunity for the university to have its student accommodation services managed by a professional provider who specialises in this area," Mr Yearwood said.

CLV, part owned by infrastructure developer Transfield, is a global provider of student accommodation, with a presence in Australia, New Zealand, the UK and the US.

Working in partnership with universities, CLV not only develops student housing projects, securing the necessary planning approvals and finance, but also assumes management of the facility once it is complete.

'That allows universities to focus on their core business while we look after the students in a social side of things, what we term pastoral care."

"We offer a long-term presence, which is strategically important to universities; they like to know who they're dealing with, not just now but also into the future."

The ECU contract is the company's second WA university project.

It recently completed an expansion of Murdoch University's student village, after taking over the facility in January 2007.

The redevelopment expanded the student village capacity by almost 300 new rooms, providing a total of 830 beds in time for the beginning of semester one 2009.

Murdoch University director of student liaison and recruitment, David Macey, said the university was approached by CLV almost two years ago with a proposal to take over the management of student village with a view to expanding capacity.

"One of the rationales for partnering with CLV was that the student village had been full for a number of years," Professor Macey said.

"It was an ideal opportunity to develop further accommodation in collaboration with a commercial partner."

The University of Western Australia is also looking to add to its stock of student accommodation.

The university released an expression of interest for the provision of extra accommodation, and has progressed to the second stage of the process, requesting detailed plans from the proponents.