With the question of when international students will return to Australia still up in the air, ECU is preparing for a return to normal. 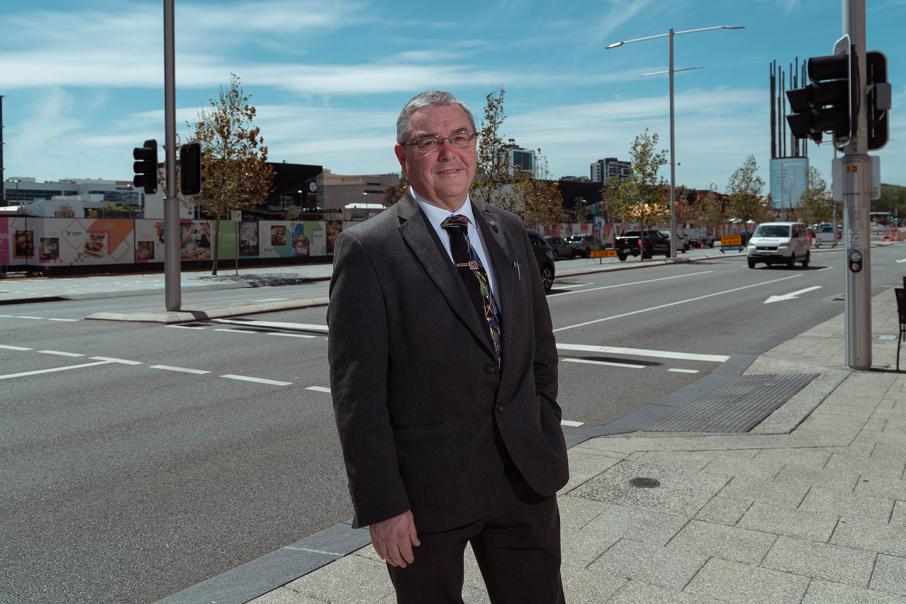 Steve Chapman argues now is the best time for ECU to pursue a major relocation of its campus. Photo: Gabriel Oliveira

The beer was plentiful and the rooms were cheap when Steve Chapman attended the University of Newcastle (UK) in the early 1980s.

The campus, which is integrated into the city centre of Newcastle upon Tyne, about 450 kilometres north of London, merged with the streets, with the spoils of the city and the school seamlessly connected.

Unlike in Western Australia, where only one of the state’s five major universities – the University of Notre Dame Australia – is located in an inner-city area, the ideal European university defines the city, connecting railway stations, entertainment precincts and swaths of parkland.

Performing arts schools such as RADA in London and New York’s Julliard were not tucked away in suburbs, he reasoned, far away from the bustle of the cafe strips and major public transport lines. They were in city centres.

“Why do people go to [study in] London? [It’s because] they want to be in London,” Professor Chapman told Business News.

The state and federal governments appear to agree with Professor Chapman, making a combined $395 million pledge in September to fund more than half of the cost of relocating ECU into Perth’s CBD by 2025.

While the news was to be expected – the signing of the Perth City Deal between the Commonwealth and state governments in April 2018 signalled as much – the announcement was nevertheless monumental, given the context.

During the past six months, Australia’s university sector has undergone an upheaval so dramatic that the business model to which many subscribe has been rendered close to unsustainable.

International students, who brought $507 million in fees to WA in 2019, are barred from entering the country, given Australia’s containment of COVID-19 has hinged on tight border controls.

Few would argue with the results of that strategy, with Australia’s economy having avoided the deep recessions now plaguing most developed nations.

In WA, the job losses and economic pain that have beset other states have been mitigated by the state’s mining royalties income.

Universities, however, have not been so lucky.

Without international students, the sector is expected to contract significantly in 2021, as already-limited support from the federal government is scaled back.

While federal wage subsidy schemes will be tapered off in the New Year, universities, already facing comparably high hurdles to qualify for funding, will receive little in the way of additional funding or support.

What was once the third-largest export industry in the country will receive a modicum of handouts, but too little to restore the sector to its pre-pandemic scale.

For comparison, income from onshore, fee-paying international students accounted for about 17 per cent of the total revenue reported by WA’s five major universities in 2019.

Close to zero international students commenced study in Australia in semester two of this year. If that trend persists, the impact it would have on the sector’s recurrent revenue would be significant.

Many universities in WA are already struggling to cope.

Attempts by the higher education sector and the National Tertiary Education Union to head off job losses and industrial action in May failed, after a number of universities, including ECU, declined to accept a framework that would have traded pay cuts of up to 15 per cent for greater job security.

The University of Western Australia’s interim vice-chancellor, Jane den Hollander, had helped negotiate that deal, and supported it on the principle it would likely lessen job losses.

Nevertheless, its failure has left the likes of Murdoch University and Curtin University to embark on a series of cost-cutting measures, seeking savings of up to $45 million and $25 million, respectively.

Staff members are likely to bear the brunt of those measures in both instances; in the case of Murdoch, efforts to eliminate face-to-face lectures in 2021 have drawn the ire of the NTEU, which said it expected the university to shed 100 jobs by next year.

That doesn’t augur well for the 16,000 people employed across WA’s five major universities, according to Data & Insights.

Meanwhile, the federal government’s Job-Ready Graduates (and Supporting Regional and Remote Students) Bill, which passed the Senate by a single vote earlier this month, is likely to dramatically reduce funding for the sector.

While the Bill will provide an additional 100,000 placements for domestic students under the Commonwealth Grant Scheme (CGS) by 2030, changes to the overall funding scheme will halve the cost of science, technology and mathematic degrees while doubling the cost of many humanities degrees.

The changes are intended to provide a pathway for students into more readily employable roles.

Opponents of the reforms include Australian National University economist Bruce Chapman, one of the leading architects of the higher education contribution scheme (HECS), who went on record in June questioning the wisdom behind the changes.

Similarly, The University of Sydney told students in August that funding changes would have the unintended consequences of incentivising universities to enrol students into more expensive and, conversely, less employable degrees.

According to Bankwest Curtin Economics Centre’s submission to the Senate inquiry into the Bill, the legislation, if enacted against current enrolments and course selections, would likely result in a $900 million loss for the sector, with the federal government contributing less and students contributing more to the overall cost of their degrees.

All of which makes ECU’s decision to relocate its campus at a cost of $300 million over five years so curious.

According to the vice-chancellor, the financials behind the decision are sound, given the cost of upgrades to the existing Mount Lawley campus would likely have been more than the cost of relocating.

Ongoing operational costs would likely remain the same, he said, and would not have been offset by millions of dollars in additional public expenditure.

“Would we have got $245 million from the federal government and $150 million from the state government in a time when universities were doing well and there was less demand to see infrastructure investment reenergising the economy?” Professor Chapman asked.

The flow-on economic effects will include a suite of construction jobs in the short-term, while a greater student presence in the CBD will likely boost visitation to pubs, cafes and restaurants in the surrounding area.

In the longer term, having an entire campus centrally located and integrated into the city’s infrastructure will be a drawcard for domestic students.

“Go to major cities around the world where you have a large student population, [and] it thrives,” he said.

“There’s just a buzz you get that you don’t when you just get city workers coming in.

“They don’t hang around in parks reading books or flood into bars.

“The state and federal government got it and that’s why they’re putting the money in.”

The move to emulate the layout of global universities also appears to be aimed at attracting overseas students, once restrictions on the international border are eased.

Professor Chapman told Business News there was already sufficient capacity to meet demand from international applications and that, if the international border was to relax by semester two of next year, ongoing financial operations should not be significantly affected.

The federal government’s budget, however, assumes the international border will not reopen until late 2021 at the earliest, and even then assumes a COVID-19 vaccine will be widely available.

Limited travel with New Zealand and some countries throughout South-East Asia has already been proposed, and pilot programs to fly select groups of international students into Northern Territory and South Australia are already under way.

It is not yet known whether the WA government is considering a similar plan.

Beneath all of this is the assumption that, when international travel resumes, the federal government will want universities to return to their pre-pandemic structure.

He is, however, conscious of the ambiguities ahead.

“Am I absolutely confident that the [federal] government is wedded to going back to the way we were before … as a location of choice for international students? I would love it if they were, clearly, as would everyone in the sector,” Professor Chapman said.