The granting of planning approval for a $400 million apartment project in Port Hedland has focused attention on environmental issues facing the Pilbara town. 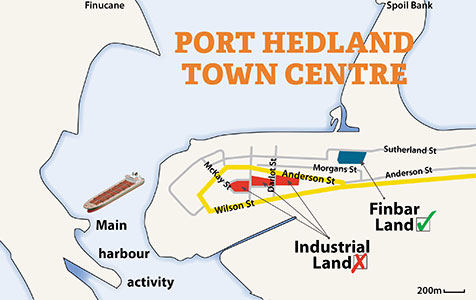 The granting of planning approval for a $400 million apartment project in Port Hedland has focused attention on environmental issues facing the Pilbara town.

In January 2009, the Environmental Protection Authority issued a report expressing concern about dust and noise levels in Port Hedland, where the town centre sits alongside giant iron ore stockpiles and shipping berths.

Five years on, the issues raised in the EPA report attract continuing attention, with the state government having established a Port Hedland dust taskforce and health monitoring studies proceeding in the town.

With iron ore shipments through Port Hedland continuing to grow, as BHP Billiton, Fortescue Metals Group and other companies expand their Pilbara mining operations, the environmental watchdog remains concerned about dust and noise issues in the town’s west end.

An EPA spokesman told Business News that, since publishing the 2009 report, it has become increasingly concerned about the potential health effects of long-term exposure to PM10-sized particulates

Against this backdrop, the local council and the business sector have been keen to progress property developments that will help to revitalise the town and support growth in its population to a targeted 50,000 people.

Those efforts are starting to gain traction, with Perth-based apartment developer Finbar Group set to proceed with the first big new residential project in the area, after gaining ministerial approval this month for a 10-storey apartment building overlooking the proposed Spoilbank Marina.

This replaces an earlier plan, announced in July 2012, to build 367 short-stay apartments along with 3,900sqm of commercial space.

That amendment was aimed at rezoning industrial land to permit hotels, motels, serviced apartments and other commercial uses.

EPA chairman Paul Vogel said at the time that the local council’s request for a scheme amendment could not be granted until a study into the potential health impacts of dust exposure was completed.

“The EPA will not risk people’s health and has deemed the scheme amendment cannot be permitted until the results of a health risk assessment are known,” Dr Vogel said last August.

The departments of state development, health, environment regulation and planning all opposed the amendment until the health risk assessment was completed.

A health department spokesman told Business News this week that the process of collecting and assessing the results of dust monitoring was still under way.

The EPA did not oppose the town-planning scheme amendments relating to the Finbar project, apparently after it obtained mixed advice.

However, BHP Billiton and the departments of state development and health subsequently intervened in the planning assessment to oppose the amendment.

A BHP spokesperson said the company believes the Finbar project contradicts the recommendation in the Port City Growth Plan that no further permanent residential development be permitted in the town’s west end precinct.

More generally, it wants a buffer between the port and residential areas and is concerned about any developments that may impinge on its iron ore export operations.

The mining giant actually had its own plans some years ago to develop the former hospital site as FIFO accommodation, and also discussed with the state government plans to underwrite a hotel development.

However BHP, along with most other developers, has focused its attention on the Pretty Pool area, located further east, and at South Hedland.

The Quattro, Murdoch Drive and Cedar Woods developments in South Hedland are expected to deliver about 230 residences over the next five years and BHP has completed construction of 44 apartments.

Despite the opposition, including from his own health department, Dr Hames approved the town planning scheme amendment.

The Finbar project remains subject to gaining development approval from the local council.

This will include Finbar complying with a dust and noise management plan that the council introduced in 2012 for the west end precinct.

“This requires all developments in the west end with a residential component to have a mechanical engineer’s certificate to ensure compliance with the dust management plan,” Mayor Kelly Howlett said in a statement.

“The west end residential zone, in addition to the development controls, provides suitable land use permissibility.”

Finbar said it was now finalising documentation with LandCorp to acquire the hospital site with a view to seek development approval for the first stage of the project, consisting of 138 residential apartments and 800sqm of commercial space.

It will proceed to commence construction of the first stage (and subsequent stages) once sufficient pre-sales have been achieved.

Managing director Darren Pateman said he was very excited to hear about the scheme amendment, saying that the proposed apartments would fulfil a pent-up demand for cosmopolitan living in Port Hedland.

He said Finbar would benefit from the significant experience it had gained from its entry into regional markets.

Most notably, last year it completed the second stage of its multi-storey Pelago apartment project in Karratha.

Meanwhile, Ms Howlett said a draft business plan for the Spoilbank Marina precinct had been developed and was being reviewed by the town.

It will be presented to the council later this year for consideration for advertising for public submissions.

The town has also initiated scheme amendment 56, which is currently with the EPA, to set the level of environmental assessment required for the marina site.

Dr Hames told Business News that "in reaching my decision to approve Amendment No. 62, I took into account the many submissions made both for and against the proposal".

"I am confident that the future development of the site will be designed and constructed to mitigate dust impacts on residents. This is in accordance with the Town of Port Hedland – Town Planning Scheme No. 5."