SPECIAL REPORT: There has been a notable reduction in the number of high-earning executives in WA, though some individuals do well year after year, research by Business News has found. 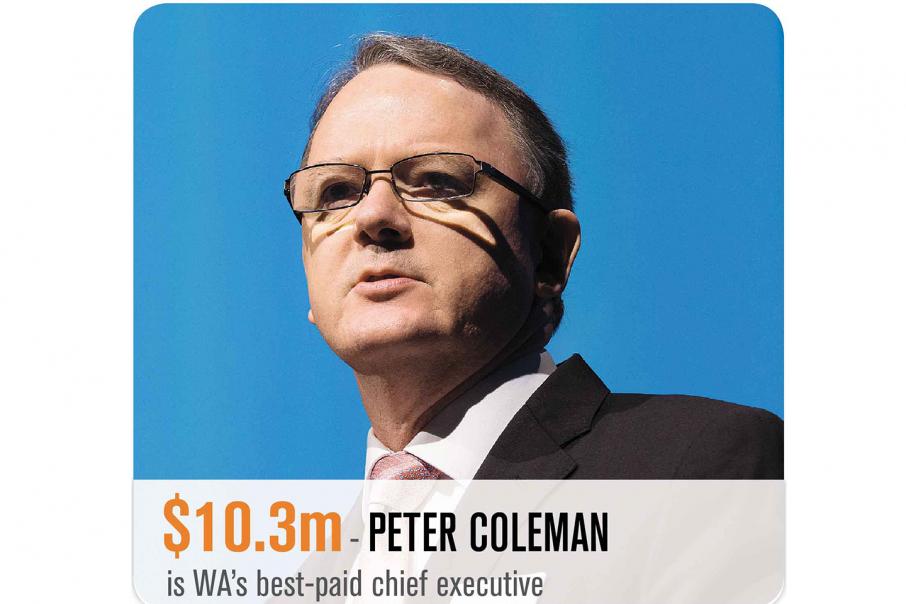 SPECIAL REPORT: There has been a notable reduction in the number of high-earning executives in WA, though some individuals do well year after year, research by Business News has found.

It may be due to the soft stock market or it may reflect companies tightening their belts.

Either way, this year’s remuneration survey reveals a significant fall in the number of senior executives and company directors in Western Australia with total incomes of more than $1 million.

The number has fallen to 87, after spiking last year to 113.

That result was helped by a jump in the number and value of equity-based incentives granted to senior executives at listed companies.

As with previous instalments, this year’s survey, undertaken in partnership with BDO Remuneration & Reward, highlights the correlation between company size and remuneration.

Any correlation between performance and remuneration is much harder to identify.

The chief executives at WA’s largest listed companies sit near the top of the list. 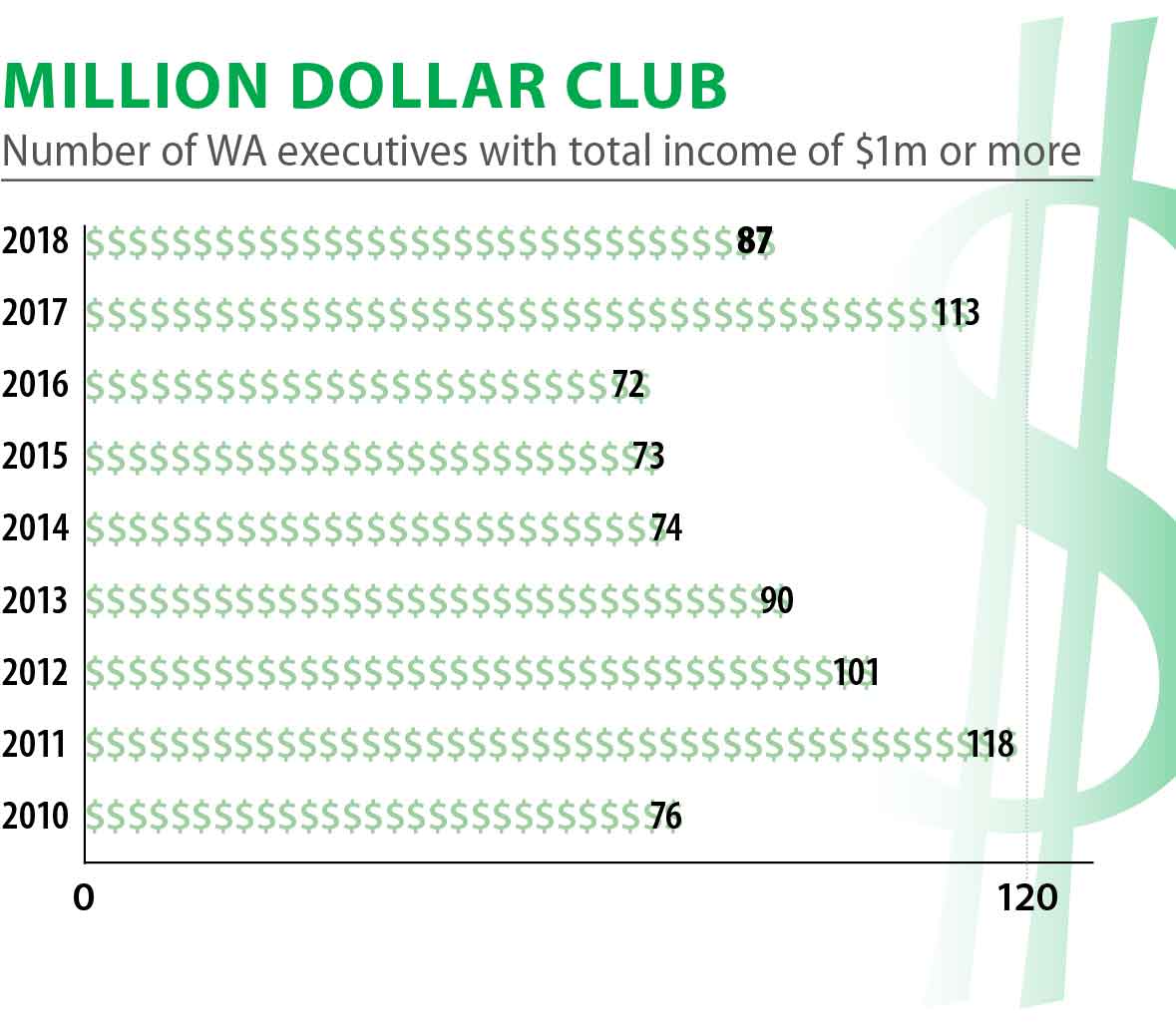 Based on past experience, Mr Scott is likely to become number one on the list, once his longer-term equity incentives kick in.

It’s not just at the chief executive level where the big companies dominate.

Woodside had seven senior executives who earned in excess of $1 million last year – and that’s just the names that are disclosed in the company’s annual report.

The survey results show there are many different ways of getting a high remuneration package.

The starting point at the big end of town is to pay a high base salary.

Sixteen Perth-based executives were paid a base salary of more than $1 million last year, including the likes of Mr Coleman, Mr Scott, Mr Kerr, and Mineral Resources boss Chris Ellison.

Added to that is the annual bonus, which is traditionally paid in cash but in some cases now paid in shares or some other form of equity.

Peet chief executive Brendan Gore was next in this measure.

He earned a bonus last year of $918,000, which meant he doubled his cash salary.

Looking back over the past five years, Mr Gore has done the same thing every year.

Austal chief executive David Singleton was another person to earn a big annual bonus, in his case $912,000.

AHG’s Mr McConnell followed him, with a salary package that includes an annual bonus of up to 100 per cent of his base salary.

His predecessor, Bronte Howson, qualified the full bonus in many years he held the job.

In light of the relatively weak performance of AHG’s business, Mr McConnell’s bonus entitlement was cut to $760,000, still enough to put him near the top of the annual bonus list.

The really big swing factor for executive remuneration is equity-based incentives, which come in many forms, including performance shares and share options.

The chief executives at the state’s largest companies – Messrs Coleman, Kerr and Scott – earned some of the largest equity-based remuneration.

A standout in this year’s survey was Emeco Holdings chief Ian Testrow, who was awarded equity-based incentives valued at $3.1 million.

That followed the completion of a complex three-way merger deal and restructuring of the Emeco business.

It is worth noting that the remuneration figures published by listed companies include the estimated value of equity incentives granted to executives.

The actual value derived by the executives depends on multiple factors, including subsequent movements in the company’s share price.

Miniature satellite developer Sky and Space Global provides a good example of how very small companies can deliver potentially lucrative rewards to their executives and directors.

Three directors of Sky and Space Global were awarded equity incentives last year worth between $1.6 million and $2.7 million.

Business News has completed a remuneration survey every year for the past 17 years, and one thing it highlights is the names that feature year after year.

Each year for the past five years he has been among the state’s top-20 best-paid executives – helped by bonuses and equity incentives every year.

Another example is Sandfire’s Mr Simich – his total remuneration last year was $3.1 million.

For each of the past four years, he has been among the state’s top 40 earners.

NRW Holdings’ Julian Pemberton and Western Areas Dan Lougher are not in quite the same league, but they have also featured among the state’s best-paid executives over recent years.

These executives all run successful mid-cap businesses, and in each case a substantial portion of their remuneration is equity based, and therefore ‘at risk’. 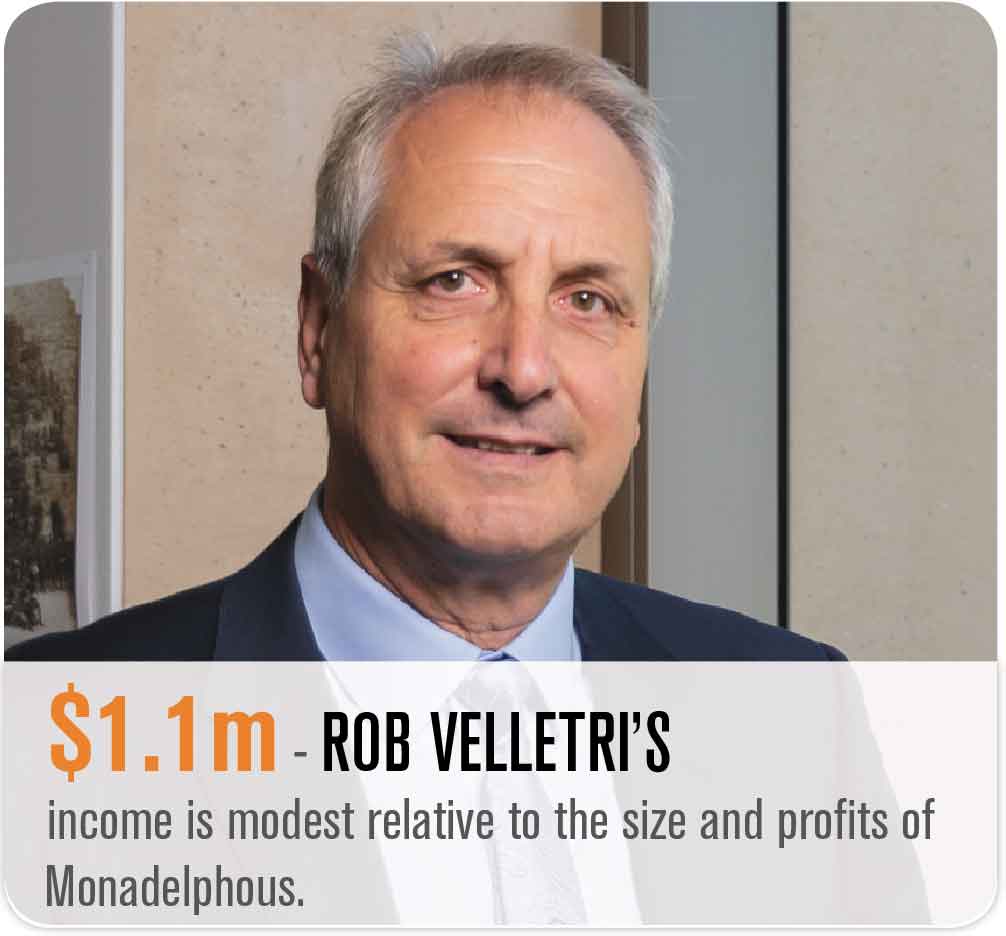 It is interesting to compare with Rob Velletri, the long-serving chief executive at engineering contractor Monadelphous.

His total remuneration last year was $1.1 million and is around that level most years.

That’s despite Monadelphous being substantially larger than most of the companies mentioned above, and by most measures, a consistently successful business.

“Something that we’ve done in Wesfarmers is that we’ve taken a leadership role around remuneration,” he said.

“Next financial year, (chief financial officer) Anthony Gianotti and I will not receive any short-term cash bonus.

“We will be paid salary, and we are all paid very well, so I’m not complaining about this, we are paid a salary and we have long-term share grants, which vest from four to six years.

“I think that’s a good start and each of our divisional managing directors, their cash incentive is limited to 40 per cent of their salary.”

“And having a high weighting of your remuneration towards shares that vest over a long time creates a really good alignment,” he said.

Mr Scott said it was also important to have suitably balanced performance targets, including some soft targets.

“Some of the proxy advisers criticise companies for having these so-called soft targets that are non-financial,” he said.

“I don’t necessarily see criteria that are to do with safety or unplanned absenteeism or gender balance or certain strategic initiatives as being soft targets.”

Remuneration expert Allan Feinberg said many listed companies could learn from the experience of private companies.

“Private company owners appreciate the value of equity and know not to give it away for nothing,” Mr Feinberg told Business News.

The lack of equity incentives in private companies generally did not create problems with rewarding or retaining good performers, he added.

“The private companies we have worked with ensure that their executives have a vested ‘at-risk’ interest in the business,” Mr Feinberg said.

“The reward, however, is not equity, it’s cash.” 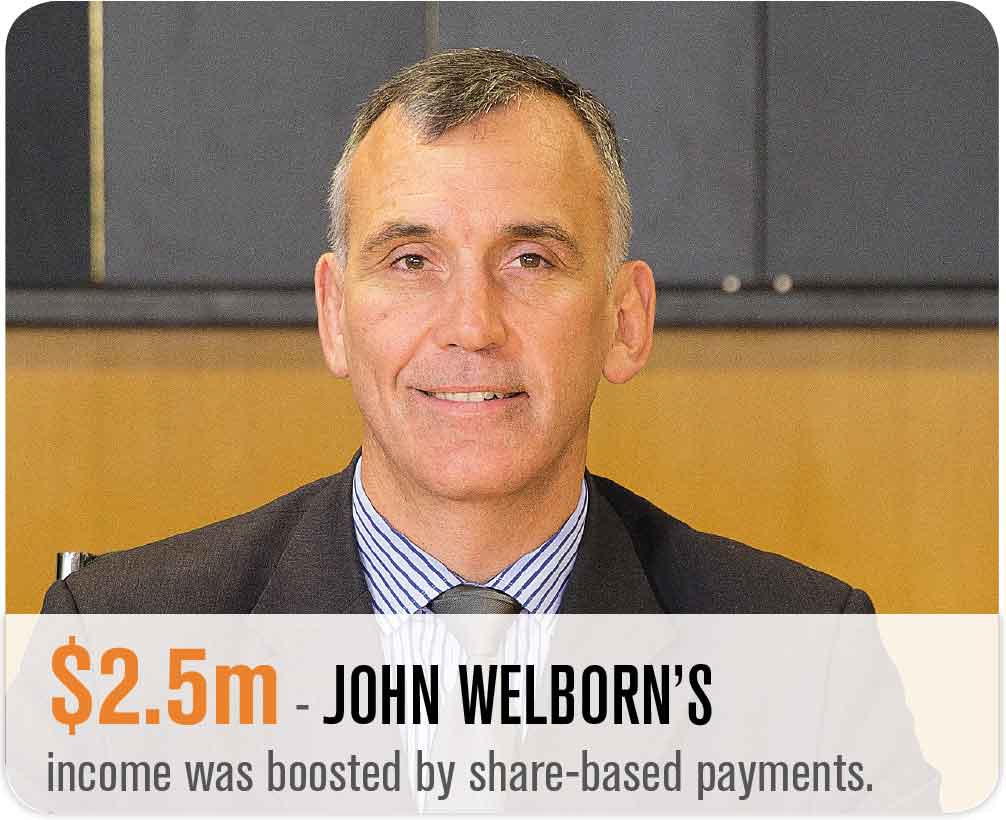 The managing director of BDO Remuneration & Reward said there was another notable difference between private and listed companies.

“This is a good thing because most executives would rather choose a clear package than a more ambiguous one of the same or potentially higher value.”

Mr Feinberg believes many listed companies worry too much about the influence of proxy advisers.

“A company’s remuneration approach should not be managed based on what a proxy advisor wants,” he said.

“Instead, the board should be transparent and look to inform stakeholders what they are doing and invite feedback.

“It does not necessarily mean they have to take that feedback.”

Mr Feinberg said long-term incentive schemes are meant to ensure executives had skin in the game and a vested interest in the outcomes of the business.

“This means that if the company they are managing loses value, then they too should feel that pain by having their personal wealth eroded with that of shareholders,” he said.

“Most LTI plans do not create that experience.

“They are based on the promise of a future reward and if that does not occur, there is no loss to the executive.