A UNIQUE partnership between Shenton Park-based Dreamfit Foundation and Wesfarmers is enabling the two organisations to meet their respective staffing and recruitment goals. 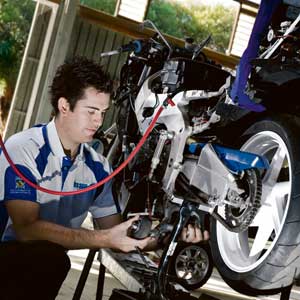 THE RIGHT FIT: DARREN LOMMAN SAYS DREAMFIT FOUNDATION HAS PROVIDED HIM WITH THE OPPORTUNITY TO DO SOMETHING FOR THE COMMUNITY. PHOTO: GRANT CURRALL

A UNIQUE partnership between Shenton Park-based Dreamfit Foundation and Wesfarmers is enabling the two organisations to meet their respective staffing and recruitment goals.

Dreamfit was established in June 2003 when founding chief executive Darren Lomman, then a 20-year-old University of Western Australia engineering student, met Shane Thompson, a former motorbike champion who had become a paraplegic following a motorbike accident.

That chance meeting led to the creation of a unique not-for-profit organisation that allows engineering students to be mentored and trained through a range of projects designed to benefit disabled Western Australians.

"At the time I thought, 'I'm not going to end up working in the corporate world and make some big company lots of money from my engineering', so I thought the foundation was my one chance to do something for the community and help someone out, and I knew that's what I wanted to do," Mr Lomman told WA Business News.

Some time after the encounter with Mr Thompson, Mr Lomman attended a function and was seated next to Wesfarmers chief executive Richard Goyder.

Mr Goyder showed an interest in the foundation and recognised it as a unique opportunity to recruit young engineering students with experience working on real projects.

"He's [Mr Goyder] probably the closest to the most philanthropic support we've ever had, but the interest for him was the engineering students coming through," Mr Lomman said.

"The tangible outcome for Wesfarmers is that we're training the next generation of employees. With the new structure we're looking at a two-and-a-half-year program, so towards the end of the students' second year they come to us and do an induction and get the real world skills right here.

"For the students it's a fantastic opportunity to understand handling management timelines, and they work with structural engineers who oversee the engineering side of things.

"So it's a chance for Wesfarmers to meet some students before they graduate and to take a look before other companies and see first-hand how they work and whether they want to employ them.

"Lot's of people are getting laid off at the moment and there's a lot of engineering students coming through, so these companies are going to have challenges; they're probably not hiring as many as they were - they might have dropped their intake from 30 to five.

"So it's even more crucial to hire the five students, so how do they do that?"

According to Mr Lomman, this is one of the benefits Dreamfit can offer - putting the students through two-and-a-half years of training and recruitment exercises and assessing their worth.

"They can go through the whole feasibility plan, implementation, reporting and all of the skills you will need for an engineer and these companies will know if a candidate is good for employment or not," he told WA Business News.

"So instead of investing their money into costly recruitment exercises once they graduate, they can put their money with us, we can work with them and we can tell them basically who the good ones are.

"But at the same time we're helping the disabled community; it's a real win-win situation."

Dreamfit has a seven-year peppercorn lease ($1 per year) with strategic partner UWA to operate its workshop at Shenton Park, aptly named Dreamplex, with the university investing $1.5 million by providing the facilities and land.

Although Dreamplex is supported by local businesses such as Hames Sharley Architects, Wood and Grieve Engineers and Structerre, the foundation is having difficulty raising several million dollars to complete workshop fit out-so it can reach its potential to train 150 engineering students each year.