THE motto of The Smith Family is simple: "Every child deserves an equal chance to a better future". 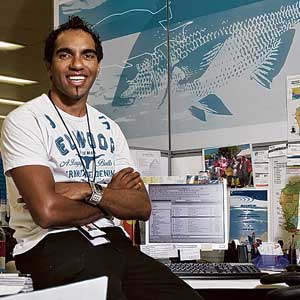 THE motto of The Smith Family is simple: "Every child deserves an equal chance to a better future".

Since 1988, The Smith Family, in partnership with corporate sponsors and the broader community, has offered a sponsorship program that provides disadvantaged children with the resources and support they need to reach their potential through education.

With one in seven children in Australia living in a household where no parent is employed, many begin their schooling at a disadvantage.

Barry Lawrence is a former student of The Smith Family's Learning for Life program and in 2003 became the first indigenous student in 10 years to complete year 12 at Kwinana High School.

Having endured racism on a daily basis in his early years at school, Mr Lawrence found he became side-tracked and his grades began to suffer.

"I was having a tough time, I wasn't focused on doing any study and I drifted off," he told WA Business News.

"So the AIO [Aboriginal Inclusion Officer] and a teacher waltzed me across the road from the school to where The Smith Family was located and they spoke to me and gave me advice. They said with the grades I was getting I should've been doing well at school.

"So they put me into their program and gave me a scholarship and I was able to continue on to year 11 and year 12."

Mr Lawrence said The Smith Family provided him with the necessary tools to complete his schooling, including mentoring and a tutor for each of his subjects.

After being on the Learning for Life program for four years, the now 22-year-old briefly worked for the Department of Education and Training, before gaining employment with the WA Department of Water as a compliance analyst.

"If I hadn't done this program it would have been a hard task to get this far," Mr Lawrence said.

"Without the mentoring and guidance they gave me and the support, without all that it would have been really hard. I've always said if it wasn't for The Smith Family to come along at that crucial time I would have been somewhere else and would have been off as just another wasted talent."

Mr Lawrence called on more organisations to assist indigenous children through their education, saying there were not enough pillars of support in the community for Aboriginal children.

The Smith Family is a national, independent not-for-profit organisation supporting disadvantaged children to reach their potential through education and learning opportunities.

This month, the organisation's Back to School Sponsorship Appeal is aiming to secure 4,000 new sponsors for disadvantaged Australian children.

Child sponsorship assists with the cost of school expenses such as uniforms, stationery, books and excursions and extends to further education and learning support such as literacy, mentoring, tutoring and personal development initiatives.

Through its host of sponsors, the organisation supports more than 27,000 Australian children, including more than 2,200 in WA.

Sponsors are anonymous but receive student profiles completed by the family and are encouraged to regularly correspond with their sponsored child.

Another not-for-profit organisation that works with the community, industry and government to assist indigenous students through their schooling is The Graham (Polly) Farmer Foundation.

Started in 1995 by a group of people who were inspired by Graham Farmer's vision to improve opportunities for young Australians, the foundation aims to enhance the skills and potential of young Aborigines and generate positive aspirations and community relations in young indigenous people.