Dr Turner to hit the road

Reigning 40under40 winner Angus Turner has welcomed an investment of almost $4 million into the Lions Eye Institute and pledged to use the funds to implement a new mobile eye healthcare service for use in the state’s most remote regions. 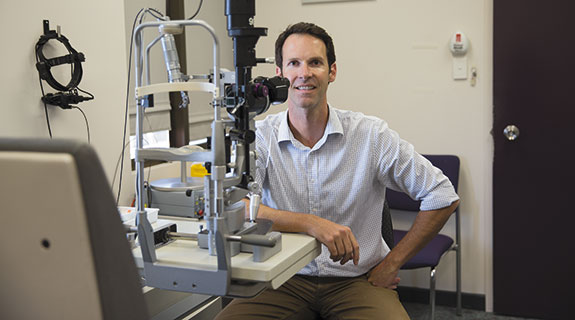 Reigning 40under40 winner Angus Turner has welcomed an investment of almost $4 million into the Lions Eye Institute and pledged to use the funds to implement a new mobile eye healthcare service for use in the state’s most remote regions.

The not-for-profit institute has received $2 million from the state government and $1.9 million from Lotterywest, to be meted out over the next five years.

Dr Turner, who was named the 2015 First Amongst Equals in Business News's 40under40 awards, said the new funding would pay for a state-of-the-art treatment van to care for 200 patients per week and travel 24,000 kilometres a year across the state.

“Developing a mobile eye clinic with the capacity to diagnose and treat more complex cases is not a cheap or straightforward exercise,” said Dr Turner, who is the McCusker director of Lions Outback Vision.

“The benefits, however, are enormous. Once the vision van is up and running early next year, it will prove to be a highly cost-effective way of providing access to critical eye healthcare.

“It will also support one of Lions Eye Institute’s major goals to bridge the gap between rates of vision loss and blindness in Indigenous people compared to the broader Australian community.”

Dr Turner has previously told Business News about his determination to address high rates of blindness and impaired vision among people living in rural Australia.

He has raised money, negotiated with governments, led a growing team and managed extraordinary logistical challenges as part of a consuming passion to deliver better services to rural Australians.

"Eye specialist coverage is up to 19 times lower in remote WA than in urban areas and rural residents are three times less likely to have seen an ophthalmologist," he said.

"This service will help in reducing this inequity for both Aboriginal and non-Aboriginal people."