Demand for apartment living is rising in the western suburbs, but a lack of suitable sites and community opposition to large-scale projects is hampering developers’ efforts to meet buyers’ needs. 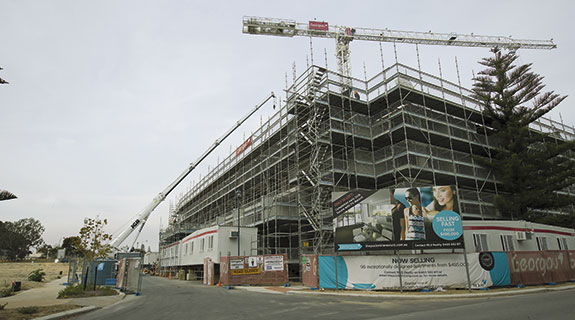 Demand for apartment living is rising in the western suburbs, but a lack of suitable sites and community opposition to large-scale projects is hampering developers’ efforts to meet buyers’ needs.

New research on Perth’s apartment market by Urbis showed there would be an increase of 20 per cent in apartment stock over the next three to four years in the western suburbs, totalling 635 new dwellings.

But Urbis director of economics and market research told a recent Australian Property Institute forum that this would not be sufficient to meet the demand from buyers, the vast majority of which were western suburbs residents looking to downsize their homes.

Mr Cresp said strong demand at LandCorp’s Claremont on the Park, where developers Mirvac Group and Georgiou are both constructing significant projects, was a good indication of the appetite for apartments among those living in the western suburbs.

However, Mr Cresp said it was not easy for developers to find sites to build apartment projects.

“There are apartments in the western suburbs, but when you look at it, most of the supply is older, 1960s supply, that is not really going to suit people looking to downsize,” he said.

“Under the current strata laws, redeveloping blocks of older apartments and flats is very difficult because you have to get access to every different owner there and there is always someone that wants to hold out for a ridiculous price.
“If the new strata laws come through, then that will free up some of the older blocks of flats to be redeveloped over time”

The other issue, Mr Cresp said, was community opposition to large-scale projects on suburban streets.

To combat that opposition, Lands Minister Terry Redman said the state government, through LandCorp, was embarking on demonstration projects in selected suburbs to show the positive results that could be achieved in sustainability and amenity through considered design.

Speaking to reporters at the launch of LandCorp’s White Gum Valley community last week, Mr Redman said the government was working to change Perth’s culture of greenfields developments on the urban fringe.

Mr Redman said the Shenton Park Hospital site would likely be the next infill project to be unveiled by LandCorp.

“You’re trying to apply high-density principles into an area that hasn’t had that before,” Mr Redman said.

“I’m very comfortable with the work that’s being done to make that attractive to the broader community.

“Part of that is consultation with the local community, so they are not scared off by ignorance of what it might look like.”