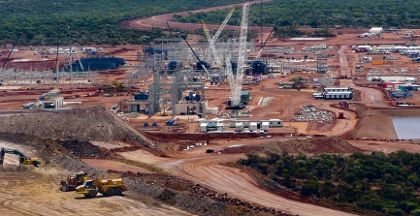 The contract, starting this month, was expected to generate revenue of about $570 million over its six-year term, Downer said in a statement.

Downer says it will establish mine infrastructure, provide drill and blasting services and haul waste and ore, at a mining rate of 30 million tonnes per annum, comprising 20Mtpa ore and 10Mtpa waste, to produce 8Mtpa of dry magnetite concentrate.

The Karara iron ore project is a joint venture between Gindalbie Metals and China's Anshan Iron and Steel Group, or Ansteel.

Gindalbie managing director Tim Netscher said the award of the open pit mining contract was a significant milestone for the development.

"The start of open pit mining will see the beginning of another huge transformation for the Karara site as development of one the largest open pits in Western Australia commences," he said.

"With the final pit measuring 3km long, 800m wide and 300m deep, in time the Karara pit will be of a similar size to other large mining pits in Western Australia, such as the Super Pit in Kalgoorlie."

The contract will employ around 120 workers, Mr Netscher said.