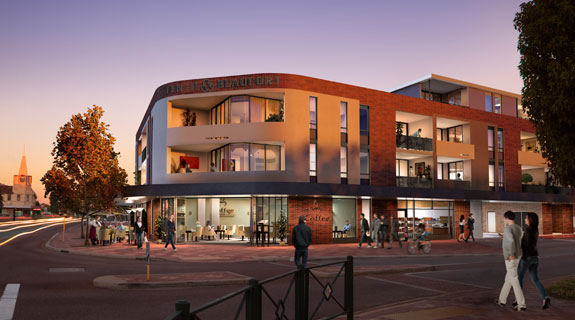 An artist's impression of Tenth and Beaufort.

Perth-based building company Doric will soon start work on Westbridge Property Group’s Tenth and Beaufort Apartments, having signed a construction deal understood to be worth around $26 million.

Tenth and Beaufort will comprise 91 apartments on a former supermarket site on the corner of Beaufort Street and Tenth Avenue, and will also include a ground-level café and retail space.

The project, which has an end value of around $55 million, will be across two separate buildings, with a five-storey structure containing one and two-bedroom apartments, and a three-level building containing 20 dwellings.

It will also include a laneway linking the two buildings.

Doric was initially engaged during the design phase of the project, which is due for completion in early 2017.

The project will be the first apartment deal Doric will start work on since it built the Oceanique Apartments in Mandurah, which were completed in 2011 for Port Bouvard, since renamed PBD Developments.

"We engaged Doric to provide advice on the buildability aspects of the project and were very comfortable with proceeding to the next stage in terms of construction and delivery," Westbridge Property Group director Matthew McNeilly said.

"Westbridge is proud that Doric is returning to the apartment scene with Tenth and Beaufort."

Sales of apartments were launched midway through January through Colliers International.

At the time of the sales launch,  Mr McNeilly said the developer was focused on ensuring the project added to the urban character of Inglewood.

“We have carefully found the best way to maximise the site’s potential, ensuring it responds to Inglewood’s existing residential and commercial environment,” Mr McNeilly said.

Mr McNeilly said today that Westbridge was very optimistic about the apartment market, describing it as robust.

"There has been strong interest during the project's pre-sales stage, especially given there's been little apartment development in the area and that we're offering ultra-contemporary apartments and high-end features in an established community," he said.

Doric has also been contracted to build the $160 million Park on Swan apartments in Rivervale, being marketed on behalf of a boutique Singaporean developer by Limnios Property Group.

It is understood Doric’s contract at Park on Swan is worth around $68 million.

Sales at Park on Swan are progressing well, with construction expected to commence before the end of the year, providing pre-sales targets are met.

The Tenth and Beaufort contract takes the collective value of works Doric has won since January 1 north of $250 million.

Other significant recent deals include Halls Head and Harrisdale shopping centres, at $32 million and $27 million, respectively.