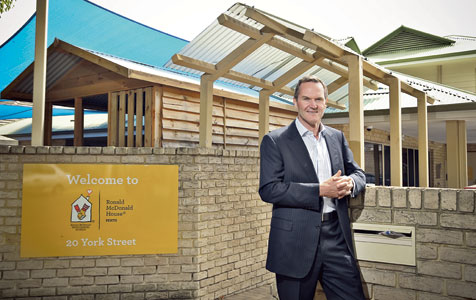 The Perth arm of charity Ronald McDonald House has done a better job than most listed companies in a tight capital market, topping its $20 million campaign goal well ahead of schedule.

The charity said Lotterywest, BHP Billiton and Fortescue Metals Group were among the leading corporate donors to contribute to the fundraising, which has raised $22 million since being launched in October last year.

Ronald McDonald House had expected it would take around 21 months to raise $20 million.

A total of 67 donations and grants have been pledged, with 92 per cent of the funds raised by the campaigns top 20 per cent of donors and partners.

The funds will be put towards construction of a much larger Ronald McDonald House to sit alongside the new children’s hospital, currently being built in Nedlands.

The house will have the capacity to accommodate 180 people each night, or 1,000 families per year, which is triple the current intake of the existing facility.

“We are very proud of all the donors, community partners and the campaign volunteers who have made this project so successful,” Ms Salmond said.

“As an independent charity, we rely on donations from the WA community to provide a supportive home-away-from-home for regional WA families, while their seriously ill child receives treatment.”

Chairman of the Stronger Together campaign, Peter Meurs, said the fundraising was just the beginning of the journey for the new house.

“A larger house brings lareger overhead and maintenance costs, so ongoing support is still as important as ever,” Mr Meurs said.