SPECIAL REPORT: Four prospective domestic gas projects will be key to ensuring adequate supply in WA in the next decade, despite new facilities recently starting up. 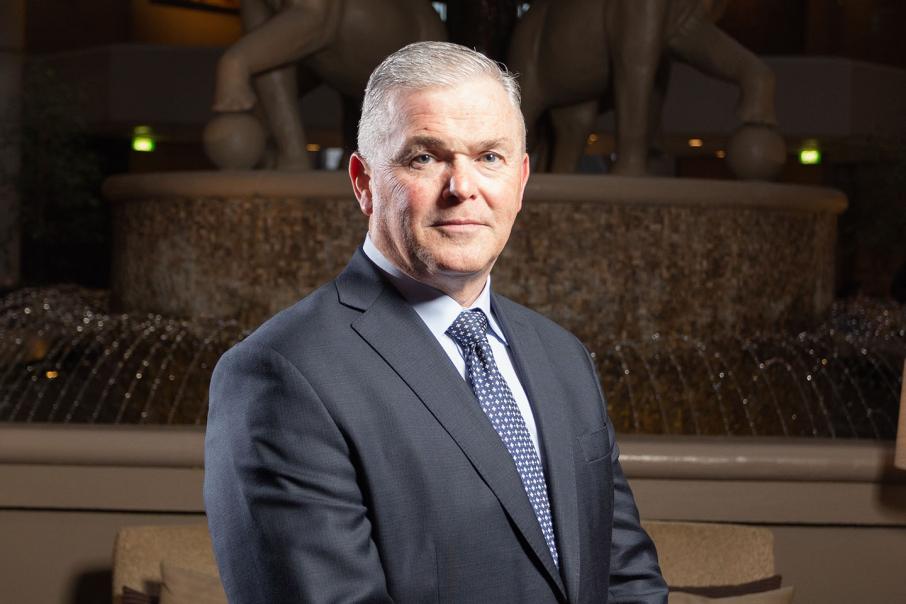 Four prospective domestic gas projects will be key to ensuring adequate supply in WA in the next decade, despite new facilities recently starting up.

Nearly 500 terajoules per day of domestic gas capacity, or 44 per cent of expected demand, will enter the local market in the next five years, just in time to balance an accelerating depletion of existing sources.

If one or more major projects hits the wall, however, there’s every possibility of a sharp rise in gas prices to bring alternative fields into the market.

Industry watchers will be keeping a close eye on two Woodside Petroleum LNG projects in particular – Scarborough and Browse.

Woodside will make final investment decisions on the developments in 2020 and 2021, respectively, amid pressure from an expected fall in Asian LNG prices and potential tough new environmental regulations.

About 15 per cent of the gas from both LNG developments would be reserved for the local market under a state government policy that has existed since 2006 (unless a waiver is granted).

The Scarborough project, which underpins development of a second processing train at the Pluto gas plant, at a combined cost of $15 billion, would bring about 125tj/d of new domgas capacity to Western Australia, according to research by the Australian Energy Market Operator.

Browse would be even more substantial, at 230tj/d.

The Browse LNG project is a $21 billion investment to pipe gas from fields in the Browse Basin nearly 900 kilometres to the existing Karratha Gas Plant, operated by the North West Shelf Venture.

Woodside has said on the record that Karratha LNG trains will need to shut down in the mid 2020s if Browse does not proceed. 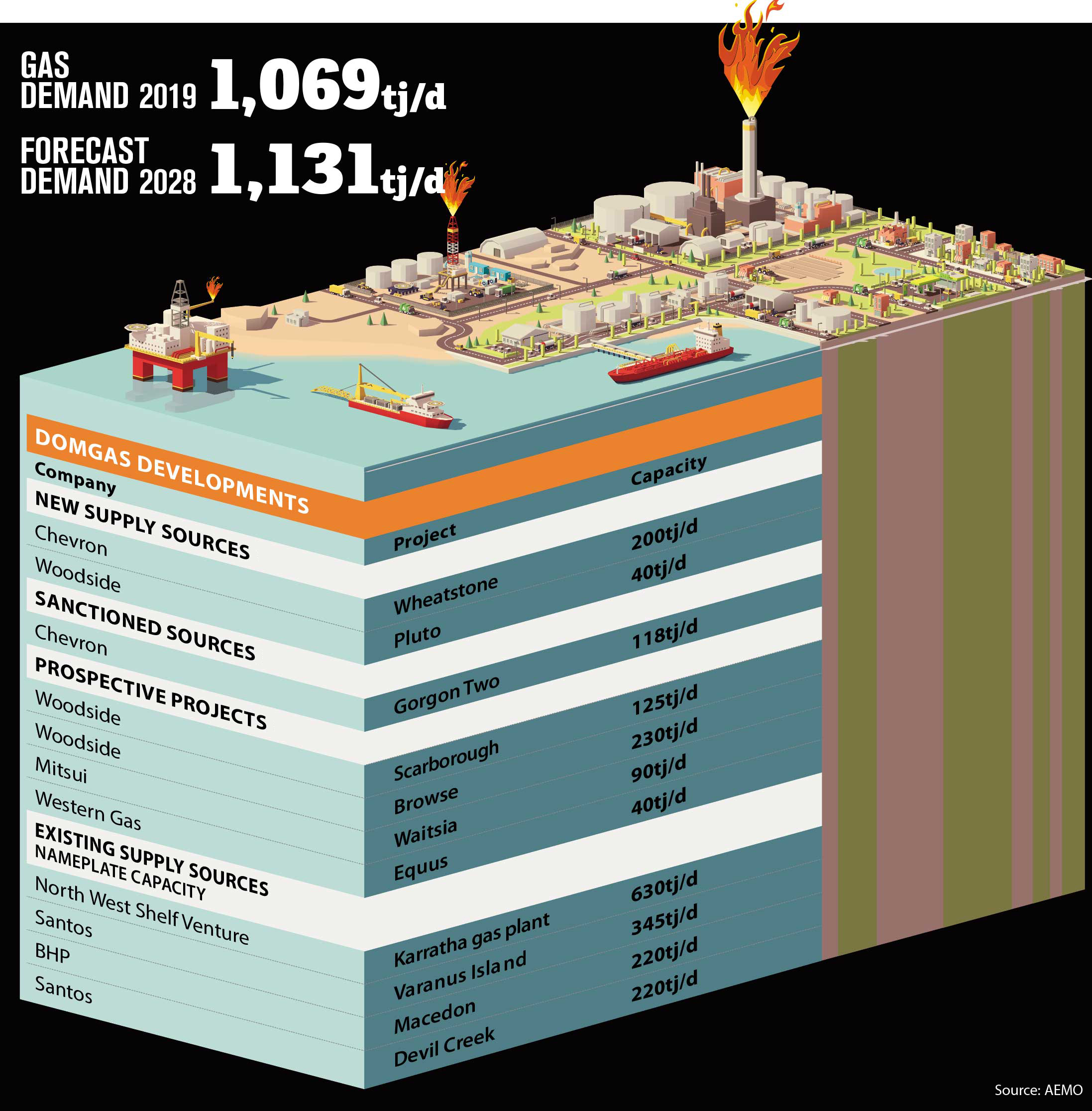 The co-located Karratha domestic gas plant is particularly significant for the local market.

It has a capacity of 630tj/d, despite operating at an average output of 374tj/d in the past 12 months.

Continued domestic gas from Karratha is, therefore, highly dependent on the outcome of the brownfields Browse project.

One recent research report, by investment bank JP Morgan, cast doubt over the likelihood of the development.

Low prices will make it much more difficult to achieve alignment between the seven partners involved at varying levels across the two projects.

There are two other prospective supply sources – Mitsui and Beach Energy’s Waitsia stage two, which could bring at least 90tj/d into the market, and Western Gas’s Equus LNG development, which should contribute 40tj/d.

In July, Beach announced a small expansion of Waitsia, increasing capacity by 10tj/d, to 20tj/d.

However, Beach has flagged that the operation could be expanded to produce as much as 250tj/d, with more work ongoing.

At Pluto, there’s also a truck loading stop to encourage uptake of LNG as a fuel for transport, with capacity of 15tj/d.

An expansion of the domgas plant at Chevron’s Gorgon is also committed for 2021.

In its annual market update, AEMO warned potential supply exceeded demand, but only if prospective new sources actually entered the market as early as 2022.

“Gas supply declines in all scenarios through 2021, in line with reserve depletion at existing production facilities,” the operator said.

“As early as 2022, potential gas supply from existing and under construction supply sources is expected to be insufficient.

“Prospective supply sources are expected to fill this gap.”

AEMO said 276tj/d out of the 485tj/d associated with the four prospective projects would be necessary to meet their base-case demand forecast.

“Delay or deferral is a very real possibility, as Chinese buyers in particular hold out on contracts as they watch the US-China trade war unfold,”  Mr Gallagher told a recent Petroleum Club dinner.

“When enough new gas supply isn’t developed … the outcome is what we’re currently seeing on the east coast, and what we were seeing in WA not that long ago.”

Only eight years ago, prices in WA were double those on the east coast, he said.

“We need to find a pathway to accelerate the next round of domestic gas development to ensure domestic gas prices can settle at levels substantially below LNG netback prices, while ensuring producers’ returns.

“One pathway … would be for domgas producers to access higher price markets such as those in Asia or those on the east coast.

“Producers would be incentivised to develop and deliver gas for the local market if they too had access to LNG infrastructure and the opportunity to benefit from blended pricing.

He said Santos had projects close to LNG infrastructure, although he did not specify which projects would be on the radar.

Likely candidates include the Winchester discovery, near the existing Pluto pipeline, and the Bianchi and Zola discoveries, south of the Gorgon field.

“Without access to LNG infrastructure or other higher price markets, the economics of some of these projects, despite low development costs, will be challenged, particularly when there’s a risk of displacement by LNG domestic market obligation gas that is sold on a compliance basis,” Mr Gallagher said.

Three major gas users have moved to lock in supplies in the past year.

The biggest was Alcoa of Australia, which operates three alumina refineries in the South West and consumes about 25 per cent of WA’s gas supply.

In December 2018, the company inked agreements with BHP, Woodside Petroleum and Chevron, to start in 2020.

That added to existing contracts with Santos signed in 2015.

Chevron will supply 64 petajoules over the life of the contract, while Woodside’s deal was for up to 36.4PJ.

Both were over undisclosed timeframes, although for comparison, the Santos deal was 120tj/d for 12 years, which works out to be 525PJ.

The state’s other big alumina refiner, Worsley Alumina, announced deals in July with Chevron and Woodside.

Chevron’s contribution will be 60PJ over the life of the agreement, while Woodside’s is 40PJ.

Alinta, which is the state’s main gas retailer, signed a 20tj/d agreement with Beach Energy in July for gas from the Waitsia onshore field.

That will be worth about 7PJ.

That could rise to be 1,131tj/d by 2028, driven by increased need for gas in mining operations and for power generation.

Gas consumers strongly support the domestic reservation policy through organisations such as the Domgas Alliance, while producers oppose it, led by the Australian Petroleum Production and Exploration Association.

Those alignments of opinion are not surprising, as the obligation effectively acts as a wealth transfer from producers to users.

A research paper published in March by Rice University, co-authored by University of Western Australia professor Peter Hartley, found the policy cost Australia about $600 million a year, half carried by households and half by foreign shareholders.

It also argues there is minimal long-run benefit for WA’s workers, with real wages about 0.3 per cent higher.

The paper was partly funded by a grant from Woodside, but uses a computable general equilibrium model, generally accepted as a more robust modelling technique than many alternatives.

“Every gigajoule of gas diverted from the export market could have generated income equal to the export price, but instead only adds to the value of domestic industry by an amount equal to the lower domestic price,” the Rice paper argues.

“An expansion in domestic gas–using industries does not necessarily imply an increase in overall employment or capital income for Australians in the long run.

The policy also reduces the return on investment from LNG projects, and discourages incentives to invest in further production and exploration, the paper said, while pushing down local prices will mean onshore gas sources go undeveloped. 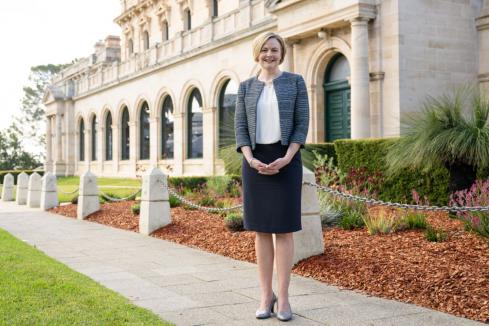