By breaking ranks from its DomGas Alliance partners, FMG has upped the pressure on the state government. 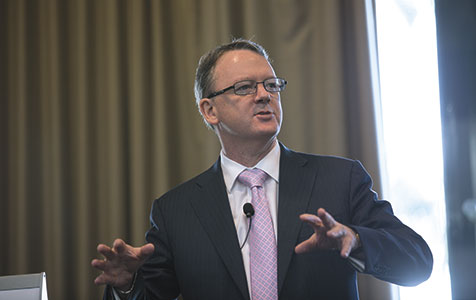 BOUNDARIES: Peter Coleman is in discussions with the state government over how much of the Browse FLNG project falls within state waters. Photo: Attila Csaszar

By breaking ranks from its DomGas Alliance partners, FMG has upped the pressure on the state government.

If both sides of the debate over the Western Australian government’s domestic gas reservation policy squared off in a soccer game, the score would be 1-1.

The recent news that an additional area of Woodside’s Browse project fell under state government jurisdiction was an unexpected yet timely strike on goal for supporters of gas reservation.

However Fortescue Metals Group returned fire with a score of its own, surprising the market with its call to phase-out the contentious policy. This places FMG at odds with a core policy of reservation proponent, the DomGas Alliance, and marking part of a growing demand for a free-market approach.

To secure the state’s gas supplies, the government requires 15 per cent of gas from liquefied natural gas projects to be reserved for sale in the domestic market.

As producers look further from shore for gas, floating liquefied natural gas projects are less likely to be subject to state policies.

However, last month’s discovery of three small rocky outcrops in the Browse basin, whose ‘island’ status increased WA’s share of the Browse FLNG project from less than 5 per cent to more than 30 per cent, was welcome news for the government.

“The domestic gas reservation policy is actually doing the opposite to what was intended. It’s actually acting as a barrier to investment and diversification in the market,” Mr Ellis told Business News

FMG has proposed strict enforcement of use-it-or-lose-it rules to stop big gas companies from locking up gas fields in retention leases and depriving the domestic market of potential new supply.

Drawing on its commissioned report from Deloitte, FMG chief executive Nev Power predicted a $3 to $4 dollar per gigajoule reduction in wholesale gas prices if the report’s proposed market reforms were implemented.

The proposed changes follow a recommendation made by the Economic Regulation Authority in April that the reservation policy be rescinded as soon as practicable.

The ERA has argued the costs of the policy on the WA economy far outweigh any benefits and there is no evidence there will be a future shortage of domestic gas at any price.

The government has not signalled it is considering any changes to the policy (which is not underpinned by legislation), although in 2012 it flagged a review for 2014-15.