Dodging a bullet on slow road to recovery

ANALYSIS: With abundant supplies of energy and the raw materials growing Asian economies need, WA is set to ride out the economic headwinds facing the eastern states. 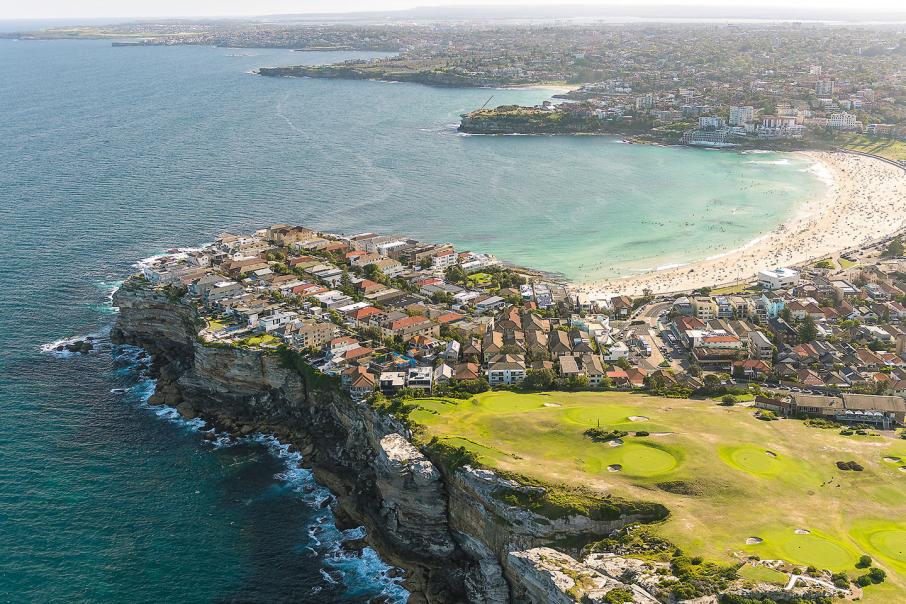 The debt levels required to service high residential property prices on the eastern seaboard means a correction will cause significant pain. Photo: Stockphoto

ANALYSIS: With abundant supplies of energy and the raw materials growing Asian economies need, WA is set to ride out the economic headwinds facing the eastern states.

China has unveiled plans to build a new super-city to ease population and pollution pressure on nearby Beijing. And while such a project might seem to have nothing to do with Western Australia, it is actually one of the signs pointing to the end of the state’s slump and a return to growth.

The Chinese authorities have some lofty goals for the Xiongan New Area, which is planned to be a “green, modern and smart city … (with) high-end innovative industries as new growth engines, opening wider to the outside world and becoming a new platform for foreign cooperation.”

The importance of Xiongan to WA lies in the demand it will create for raw materials, just as earlier stimulus to other Chinese regions, such as Shenzen and Pudong, triggered a burst of growth in China and WA.

Chinese appetite for WA’s exports, coupled with continued strong growth in the rest of Asia, has underpinned the state’s economy, even during the sharp downturn that has followed the end of the project-building boom.

That downturn, which can be likened to a hangover after a big night out, was always going to be painful, just as it was always going to pass. And while many people might not yet sense the turn, it is happening, setting WA up for a decade of steady growth, but not a boom (thankfully).

Senseless recent comments, such as comparing WA today with the Great Depression of the 1930s, will soon be forgotten, especially when other states discover that they have two massive economic problems that will stifle their economic growth – the certainty of an energy shortage and the near certainty of a spectacular property bust.

Rather than being the sick man of the Australian economy, WA is on track to resume its role as the state with the strongest economy, because: it is a key supplier of raw materials to fast-growing Asia; it has an abundant energy; and it has already had its property bust, albeit one spread out over several years.

Early signs of recovery have been evident in WA for some time, though their effect has been delayed by the last month’s state election and the uncertainty that comes after every change of government.

The private sector will bear some of the costs from government changes and the high likelihood of increased taxes to replenish a depleted budget, but the Commonwealth Bank of Australia (as far back as January) was impressed with the changes emerging in WA.

After noting the period of slow growth that followed the construction phase of the mining boom, the bank’s investment arm, CommSec, said of WA that: “The recent strong recovery in metal and mining prices and record mining export volumes are encouraging developments.

“Housing affordability also continued to improve with the consolidation in home prices,” the January edition of its ‘State of the States’ report stated.

Mining is not everything in the WA economy, but what happens in mining and oil is a useful proxy for assessing the state’s economic health.

At the time of the CommSec comments, WA was entering the traditional pre-election slowdown with consumer spending contracting and job creation sluggish, adding to WA’s unwelcome status as a state with high unemployment (6.5 per cent), falling residential property prices, and the highest commercial property vacancy rates in 25 years.

In recent weeks, other expert commentators have started to mimic what CommSec recognised in January – a turn for the better.

Chris Richardson, director of Deloitte Access Economics and a long-term observer of the national and state economies, said recently that the worst was over for WA, though a recovery to full growth would take time.

“A series of indicators are pointing to light at the end of the tunnel,” Mr Richardson said in his latest economic comments, which followed an earlier address to the National Press Club in Canberra.

He said while retail sales might be weak in WA, a slow improvement was likely, with the upward trend being WA’s friend for the next few years. Job growth was also showing signs of a turnaround and job vacancies were expanding.

That’s the good news, modest as it might be, pointing to the worst of the post-boom legacy passing through the WA economy as the global economy, especially Asia, continues to grow strongly. 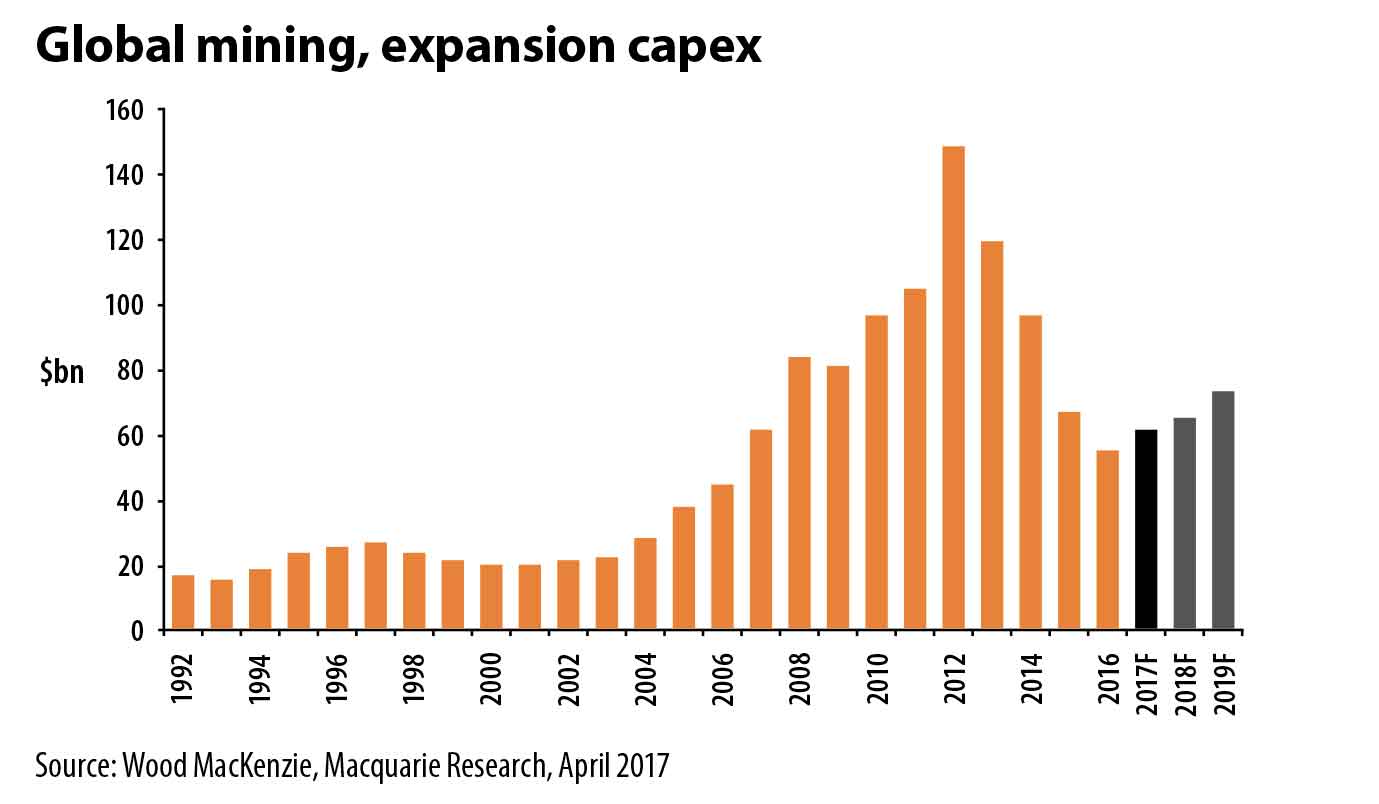 A graph (see above) of planned mining capital investment over the next three years, compiled by Macquarie Bank, is a useful forward indicator for where the WA economy is headed, because WA is traditionally a major recipient of the mining investment that flows through to myriad service and supply-related industries.

Macquarie’s graph shows that 2016 was the bottom in the current cycle of mining capital investment, at roughly a 10-year low. The recovery, which started this year, is forecast to accelerate with WA already receiving a fresh flush of investment through projects such as:

• Albemarle’s expansion of its Greenbushes lithium mine, plus a lithium processing plant at Kwinana;

• Sandfire Resources announcing the development of the Monty copper project;

• Rio Tinto proceeding with its Silvergrass iron ore mine, which has already created 1000 construction jobs;

• BHP Billiton moving close to a decision on its big South Flank iron ore mine, with construction likely to start in the next few years;

• Woodside taking a fresh look at laying a long pipeline from the Browse gasfield to the North West Shelf gas processing centre; and

• multiple new but small gold mine projects as miners rush to capture a share of the near-record high gold price.

So much for the good news, which will percolate through the WA economy as project development restarts and production of existing projects expands to meet Asian demand.

The future bad news is largely confined to the eastern states, which are not as closely tied to international economic events and have, during the past decade, refused to embrace the resources industry, which is one of the few natural economic advantages that Australia has.

Banning exploration for natural gas, forcing the closure of coal-fired power stations and moving too quickly and relying heavily on renewable energy sources are events hanging like an economic wrecking ball over the economies of Victoria and NSW, in a repetition of what has already happened in South Australia.

During the next six months, electricity (and gas) prices along the eastern seaboard, which is connected via the misnamed national grid (it doesn’t include WA or the Northern Territory) are likely to rise sharply, increasing household financial stress and possibly leading to the forced closure of some factories.

Until recently, state governments in the east, and to a lesser extent the national government, have been adopting an ostrich position – sticking their heads in the sand and hoping the problem would go away.

It is not going away, as the head of the Australian Competition and Consumer Commission, Rod Sims, warned last month, when he said the east coast gas market had deteriorated to a worst-case scenario.

“We think there is a crisis in the gas market, particularly in relation to industry that needs gas, either as feedstock (chemical/fertiliser) production or as a source of energy,” Mr Sims said.

“I do think companies will go out of business because of this and I think that will be a crying shame.”

Blame, always an easy option after the hard decision have been avoided or wrong decisions made, is now in full swing, together with proposals to solve the problems that smack of desperation or are simply closing the stable door after the horse has bolted.

One suggestion from the prime minister, Malcolm Turnbull, to upgrade the Snowy Mountains hydroelectricity scheme will take five to 10 years to deliver extra power.

And then there’s the looming property crisis, which promises to flatten east coast economies in a more severe way than when WA’s economy turned sour.

A second graph, this one from another investment bank, UBS, should send a shiver down the spine of everyone exposed to property (and that’s most people), especially in the eastern states yet to feel the chill winds of falling house prices. 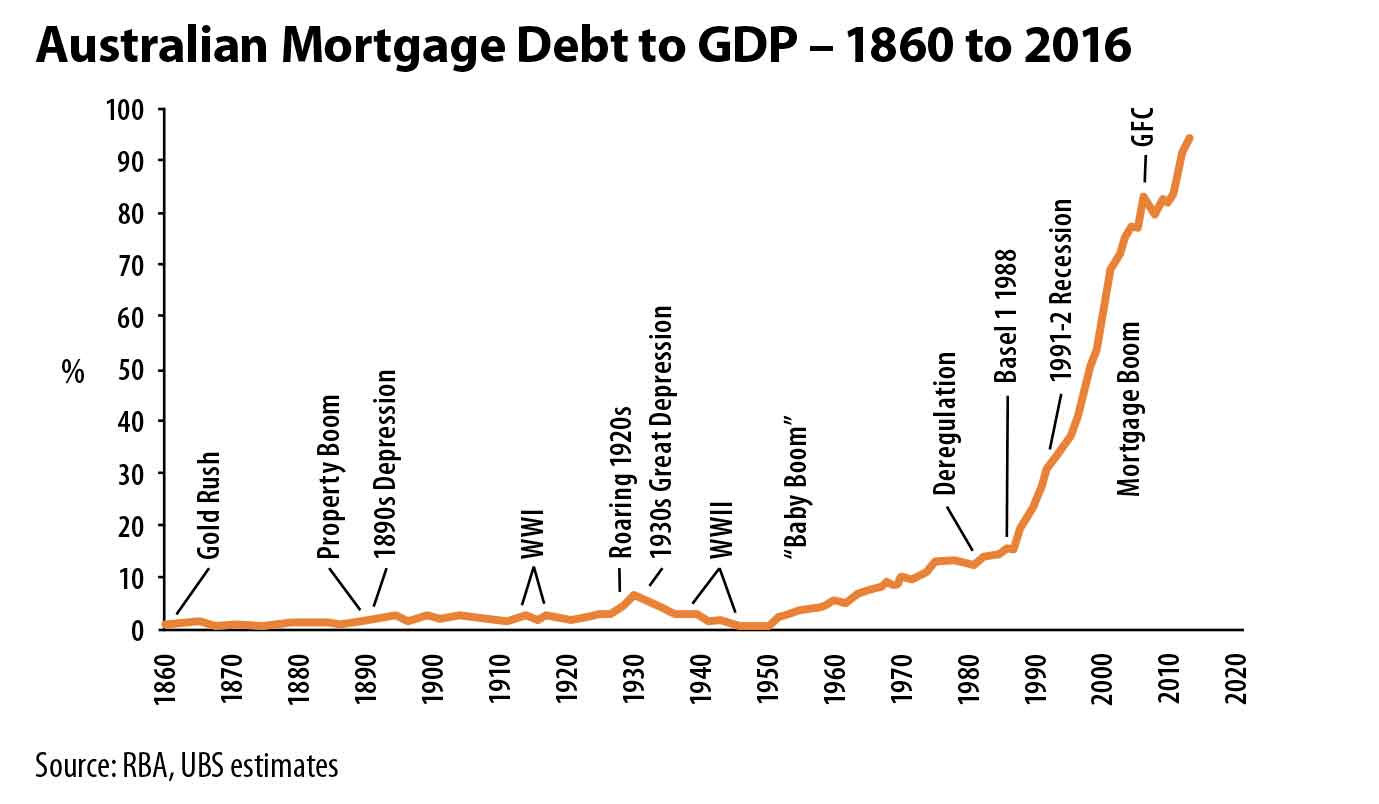 What UBS has plotted is the spectacular rise in mortgage debt in Australia, with banks force-feeding residential property buyers with huge loans in a way reminiscent of the sub-prime mortgage crisis that hammered the US economy nearly a decade ago.

Mr Richardson put a number to the east coast property bubble, saying that residential prices are 30 per cent overvalued with the mortgage burden leading to dangerously high prices.

Tipping when the east coast property bubble will burst (and there is no doubt about it being a bubble) is not easy, but it is being brought forward and made worse by the prospect of a winter energy crisis that will drive power prices up in Sydney and Melbourne, force factory closures, and put mortgage servicing pressure on households and bad debt pressure on banks.

WA will not escape what has the potential to be a full-blown banking crisis, but it will escape the worst effects of the property crash because it has already happened here.

There have always been differences in the timing of growth and contraction between WA and the rest of Australia, as has been seen over the past five years with WA going down and the rest of the country going up.

Get ready for a change as positions are reversed.