The Fremantle Dockers are closer to securing new training facilities in Cockburn with $10 million allocated in yesterday's budget but a pitch for funds by crosstown rivals the West Coast Eagles proved less successful. 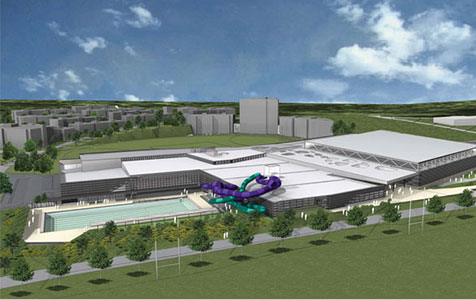 An artists' impression of the Dockers' new training facilities in Cockburn.

The Fremantle Dockers are closer to securing new training facilities in Cockburn with $10 million allocated in yesterday's budget, but a pitch for funds by crosstown rivals the West Coast Eagles proved less successful.

The government pledged $4 million in new funding towards the Cockburn Aquatic and Sports Complex in the budget, as well as $6 million from existing allocations in its Community Sporting and Recreation Facilities Fund.

This follows the $2.4 million it has already pledged to the $106 million project, as well as a land allocation.

The multi-purpose complex will include an AFL-standard oval, swimming pools, indoor courts, a gym and rehabilitation facilities, and will serve as the new home of the Fremantle Dockers and a learning site for students from Curtin University.

It will also include community-accessible education facilities, playgrounds, picnic areas and a cafe.

The project is currently in the detailed design phase, with a builder expected to be appointed by the end of the year.

The federal government last year chipped in $10 million to the Cockburn facilities, with the City of Cockburn handling the lion's share of the funding and the Dockers also expected to contribute.

Premier Colin Barnett today emphasised that the Cockburn project would benefit the wider community, not just the Dockers.

“The public money from the taxpayers through the state budget is going straight to the City of Cockburn for the community facilities," the premier said.

"It is not going to the Fremantle Dockers as such."

West Coast last year signed a Heads of Agreement with the Town of Victoria Park for a 99-year lease on the property.

Two training ovals will be constructed at the ground, one to replicate the dimensions of the Melbourne Cricket Ground and the other to be the same size as the new stadium at Burswood, which is expected to be complete by 2018.

The redevelopment plans include a gymnasium, a swimming pool, medical, coaching and player development facilities.

The headquarters will also provide a new home for not-for-profit organisation the David Wirrpanda Foundation.

The Eagles hope to move into the new centre by 2017 but the club has yet to secure government funding for the project.