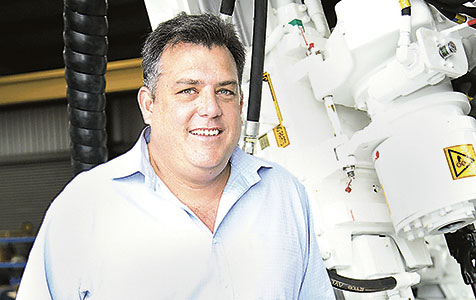 SHRINKING profit margins and dwindling cash balances in the junior mining sector are not only putting pressure on miners, but also those who provide key services to the sector.

Drilling contractors in particular are feeling the pinch from the exploration market, with pressure to reduce prices and the number of available contracts falling away as juniors cut back.

Among the state’s major drillers, those able to maintain growth have done so via diversification strategies and in drilling techniques specialisation.

In the current environment of commodity price uncertainty, many of the state’s drilling contractors have tightened their belts while revising down profit guidance for the full 2013 financial year.

Last month, Ausdrill announced net profit after tax was likely to come in between $90 million and $96 million – down from predictions of $112 million just two months prior.

The company operates in both Australia and Africa, and said the slowdown on home soil, which accounts for two thirds of its exploration revenues, was largely to blame for the anticipated reduced earnings.

“There has been a delay in resumption of activities following the seasonal shut down over the Christmas period with the current level of activity not showing signs of a recovery in the near term,” Ausdrill said in a statement.

“Exploration in Africa has declined, even in gold, due to the fall in the equity markets and companies preserving cash,” Mr Martins said.

“We would expect that activity from junior miners and explorers to remain subdued [because of] the difficulty that has been evident for at least 12 months in raising equity from the market.”

The company was able to remain strong, however, given that exploration work only accounted for about 10 per cent of overall revenue in the half year to December 2012. (Revenue for the period increased by 13 per cent to $580 million, compared to the previous corresponding period.)

Mr Martins said Ausdrill was well placed to manage fluctuations at the junior end of the scale with its focus on catering to miners already in production; two thirds of the company’s overall activity was in the production-related phase.

Global drilling company Boart Longyear also grew throughout 2012, recording $US1.5 billion in revenue from drilling services worldwide – a 7 per cent increase on the 2011 calendar year.

More than half Boart’s global revenue comes from surface drilling, such as exploration work, and the Asia Pacific region accounts for more than one quarter of its turnover.

Despite revenue still being in the black, the company’s annual report for the 2012 calendar year (released last month) gave an insight as to the effect of the commodity price downturn and spending freeze by Australian junior miners.

“Despite the company’s close monitoring of the many internal and external indicators of our business, precise forecasting remains a key challenge to our ability to manage effectively through the commodity cycle,” Boart Longyear interim chief executive David McLemore said.

In response, Boart trimmed $US70 million from its cost base through staff cuts and leadership reshuffles.

Meanwhile, Swick has been perhaps the most impressive performer in the face of the general slowdown in the mining sector.

It announced record revenue of $35.5 million for the third quarter of the 2013 financial year and is confident of overall growth for the full year.

Driving that growth is Swick’s focus on the underground diamond drilling market, which managing director Kent Swick said was an important part of the ongoing activity of producers.

“The resource sector is obviously under pressure and there are many reviews of discretionary and non-discretionary expenditure being undertaken by both clients and suppliers,” Mr Swick told Business News.

“In general, the type of work that Swick specialises in is non-discretionary spend and is, in the main, a required process when mining underground.”

The emphasis on growing the underground drilling segment began in 2005, leading Swick to invest heavily in research and development to grow its capability.

It hasn’t escaped the downturn unscathed, however, having to cut $3 million from its capital expenditure budget for growth, research and development, and maintenance for the full 2013 financial year.

“We are finding that the RC drilling market, of which we have seven rigs in the fleet, is probably the area we are finding most competitive, with very few jobs available and competition high,” Mr Swick said.

According to the latest statistics from the Australian Bureau of Statistics, expenditure on exploration fell by 20 per cent during 2012. A total of $561 million was spent in the March quarter, with that dropping to $440 million by the December quarter.

That reduced spend resulted in WA-based company ROCK Australia copping a 96 per cent reduction in profit over the first half of the 2013 financial year.

The company is a subsidiary of diversified contractor Structural Systems Group.

Its poor performance at the low point of the commodities downturn contributed to the group as a whole recording a 38 per cent drop in profit for the half year to the end of December 2012.

Structural Systems managing director David Perry said ROCK Australia had been forced to undertake cost-cutting measures, including redundancies, but ended the year over $4 million down before tax.

“The consequences of the reduction in activity in the Australian resources sector at the start of the financial year ultimately flowed through to several projects involving our mining services business ROCK Australia. This resulted in a number of project cancellations as well as reductions to the scope of works of existing contracts as clients adjusted their output requirements,” he said.

Managing director of privately run Wallis Drilling, Graeme Wallis, told Business News it had also been forced to lay off staff in a bid to cut costs; revenue had fallen by about 10 per cent and about 10 administration staff had been made redundant.

“That’s always disappointing because they’re the structure of the company, but I think everybody’s had to do the same thing.”

Mr Wallis said the reduction in business had come from the larger miners Wallis was contracted to narrowing the scope of their work, rather than less demand from juniors.

“People forget that even though exploration has slowed down, producing mines are still producing; and they still need all the drilling and servicing requirements they always have,” he said.

“With the gold mines, the ones that are producing still need drilling; it’s very hard to run a mine unless you kno