SPECIAL REPORT: How does a tech startup in Northbridge backed by a mining consultancy in West Perth manage to secure work on the world’s largest privately funded infrastructure project, in Nicaragua? Business News profiles how CSA Global, Lycopodium, OTOC and PwC have chased diversification strategies. 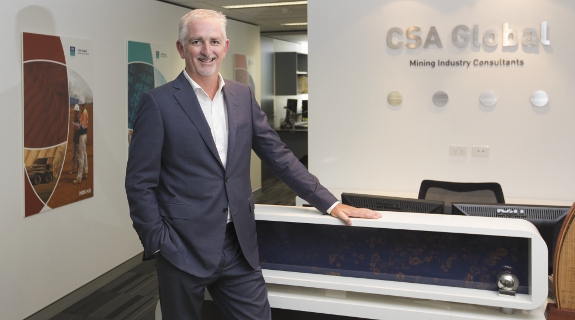 How does a tech startup in Northbridge backed by a mining consultancy in West Perth manage to secure work on the world’s largest privately funded infrastructure project, in Nicaragua?

The answer lies in the diversification strategy pursued by CSA Global, which has found novel ways of employing its expertise during the mining downturn.

CSA has secured clients in viticulture, broadacre farming and most notably on the $US50 billion Nicaragua Grand Canal and Development Project.

“We’ve got good people and we’ve got the financial resources, we don’t need to go into hibernation.”

Its recent initiatives have included applying the mineral industry’s approach to prospectivity mapping to the wine industry.

At Swinney Vineyards in Victoria, CSA built a 3D soil model showing all of the main soil types, overlayed with the viticulturist’s fruit quality maps to find which soil types coincided with the best fruit.

The results can be used to help identify the best areas for new vines.

The company took a similarly lateral approach to the farm sector.

Just as miners blend ore from multiple pits to get the best mix for clients, the same approach is being applied to hay.

“We took a mining optimisation solution and applied that to hay blending,” Mr Elliott said.

He said the work in Nicaragua came from a discussion about aerial photography.

“We told them about the technology that’s available and the benefits of that, and how it could help them locate the building materials they need for the canal, the sand, gravel, stone, cement, etc,” Mr Elliott said.

“If you know where the industrial minerals are, you could start optimising your canal route economically based on load and haul distances.”

“We thought we didn’t stand a chance because they were going global,” he said.

Despite these doubts, CSA was contracted last year to conduct an aerial geological survey of the proposed 276-kilometre canal route and the Lake Nicaragua shoreline.

“They were pleased to have exposure to international experience and diverse experience, and bringing in technology and ideas from other industries,” Mr Elliott said.

CSA recently won its second contract on the canal project, to supply an information management system for the archaeological, environmental, geological and engineering data being collected.

It’s using a cloud-based solution that was developed in-house and is now housed in Northbridge-based technology startup Spring Tech.

“That was something we developed for the minerals industry but we’ve been able to apply it to agriculture and we’re now applying it to infrastructure,” Mr Elliott said.

“He was one of the first people in the industry to use the original Apple Macs, to bring the power of computing to the geoscience field,” he said.

“He started up a GIS company that is well-known to this day, NGIS Australia,” Mr Elliott told Business News.

“It started up inside CSA, the same way modern startups happen, it was incubated then stood on its own two feet.”

CSA originally specialised in base metals, but under Mr Elliott broadened its coverage to other commodities.

It has also diversified beyond its geologist roots, to offer services such as ore body evaluation, mine planning and mine operations, and has opened international offices.

“By adding capability and opening up market opportunities, that led to clients saying: ‘why don’t you have an office here?’”

“Listed companies tend to follow market trends, they tend to be a bit late adjusting,” he said.

“Private companies can hide under a cloak and be far more nimble and dynamic.

Mr Elliott said the group also had a conservative financial model, to help it deal with the impact of commodity cycles.

“We put away hay in the good times; that gives us a reserve if opportunities come up.”

Diversification was an ongoing journey, he said.

“You should stick to your knitting unless you’ve got the expertise to move into a new area, and if you move, make sure it’s a natural extension, not a complete right turn or a big jump into another industry,” Mr Elliott said.

“It’s not like we were geos who suddenly said we’re environmental experts or construction engineers.

“We’re a mining consultancy with a range of services, and a very strong foundation geologically because that’s the heart of our service.”

Mr Elliott said a recurring theme during CSA’s growth was collaboration, which was continuing but in a different way.

“Typically in the past we pooled resources with others in the mining industry,” he said.

“The future is collaboration with people outside mining, you get greater leverage opportunities.”

In recent years, CSA has turned more attention to investing in innovation.

“What drove us to invest in innovation was the GFC,” Mr Elliott said.

“Suddenly we had spare capacity and people with good ideas.

“One of the lessons we’ve learned is that you can identify the innovation within, but don’t try to commercialise it from within.

“In a professional services firm, the mantra is staff utilisation, gross profit, hourly charge-out rates and all that.

“In a startup, if you bash them with that, they switch off.

“Those natural defence systems will attack it.

“The best thing to do, if you think you’ve got something good, is push it aside, free it up, give it space.”

CSA’s journey of innovation took another step in 2014 when technology entrepreneur Peter Rossdeutscher joined as chairman.

He also chairs a board sub-committee looking at growth opportunities outside CSA’s core consulting activity.

In support of this goal, CSA recently participated in a $900,000 capital raising for local big data company Inhouse Group.

The funding raise was led Mr Rossdeutscher, who also joined Inhouse as board chairman.

Mr Elliott said that, like all of its peers, CSA had been heavily affected by the mining slowdown.

Its turnover had fallen, while its head count had dropped to about 80 people.

However, he believes its diversification has helped.

“We’ve stood against the weather much better than most others,” Mr Elliott said.

Contractor OTOC is taking the concept of diversification further than most companies.

It is effectively creating a second, professional services business stream through the acquisition of surveying firms across Australia, to operate alongside its contracting arm.

It is hoping those businesses will deliver steady, reliable earnings, in contrast to the lumpy income from contracting.

Otoc has owned Perth-based Whelans since 2010 and has bought three east coast surveying firms during the past two years.

Chief executive Simon Thomas said the group currently held about 1.5 per cent of the national market, and wanted to get bigger.

“We have an ambition to have around 5 per cent of the national survey market,” Mr Thomas told Business News.

That presents two major challenges: Otoc will need to complete a further 10 to 15 acquisitions over the next five years to achieve its goal; and it will need to effectively integrate those businesses so it doesn’t repeat the mistakes of companies like VDM Group.

Mr Thomas said Otoc was prepared to bide its time to find the right opportunities.

“We’re not seeking out distressed businesses that we can improve through cost efficiencies and cost-cutting,” he said.

“We try to identify businesses that are sound in their own right.

“We’re looking for principals who are attracted to the concept that we’re building a large, national surveying-related services business.”

Mr Thomas said integration was a gradual process than cannot be rushed.

“We allow them to operate stand-alone for a two year period and that allows us to work hand-in-hand with the principals on how the integration process will take place,” he said.

Mr Thomas said the integration of core areas such as treasury and finance had delivered savings, such as through consolidation of insurances.

There was also a concerted effort to improve and standardise business processes to create not just cost savings, but more importantly, consistent quality and service delivery.

Mining-focused engineering firm Lycopodium has broadened its activities over the past decade but has no plans to shift its core focus, despite the downturn in that sector.

“Overwhelmingly we are still resources focused and we’ve been careful not to lose that,” managing director Peter De Leo said.

“It’s what we’re very good at and have a very good name for internationally.

“Our story has been more about broadening than diversification.”

Lycopodium has completed several small acquisitions since 1999, including its Melbourne-based process design business and its Perth-based asset management business, which have given it exposure to industries outside mining.

“They are small but they are doing some great work,” Mr De Leo said.

“They’ve made the landing a little softer.”

Lycopodium has also created new business streams, including its infrastructure arm, which has won numerous small contracts on projects ranging from the Yanchep Surf Lifesaving Club to suburban land subdivisions.

“That was really just an extension of what we did for mining-related projects, building camps, non-process infrastructure and civil engineering,” Mr De Leo said.

He said the company’s core minerals business was already diversified across commodities and geographies.

“There is no plan to reinvent the company or anything like that.

“We believe at our size and scale, that there is a sufficient market across our existing sectors.”

The ‘big 4’ accounting firms have made more than 20 acquisitions over the past two years, mostly of specialist consulting groups in the technology field.

PwC Perth office managing partner Justin Carroll said the group diversified into new areas when it recognised synergies with the needs of its clients.

“If we get a lot requests, we will look at buying or building up the capability internally,” Mr Carroll said.

“They have deep project skills that have been fully integrated into the PwC network,” Mr Carroll said.

He said acquired firms could have a lasting impact, even if the principals moved on after a few years.

In Perth, for instance, PwC acquired GEM Consulting in 2007 and Mainsheet Corporate in 2009.

“Those people have left but the capability and type of business they built, the methodologies, mindset and thought processes, that all stays,” Mr Carroll said.

“The acquisitions also established a critical mass that has allowed us to continue.

“Would we do those deals again? Every day of the week.”

Mr Carroll said PwC’s consulting practice, headed in Perth by Andrew Friars, was one of its fastest growing divisions.

A notable growth area for PwC is real estate advisory, a service it has offered for three years in Perth and six years nationally.

He believes PwC’s rounded capability was a major factor in the firm being appointed last year to manage the sale of the Insurance Commission of Western Australia’s commercial property portfolio.

“It’s not a simple property sale, nor is it a complex M&A deal, it’s in a sweet spot right in the middle that suits our service.”

Mr Carroll said while most of the graduate recruits joining PwC were from a traditional commerce background, the lateral hires were often from different areas.

“That’s become a huge part of our business, maybe the best in Australia,” he said.

He said the firm’s strategy was to be a one-stop shop for clients, but it would only offer legal services that were relevant to its core business.