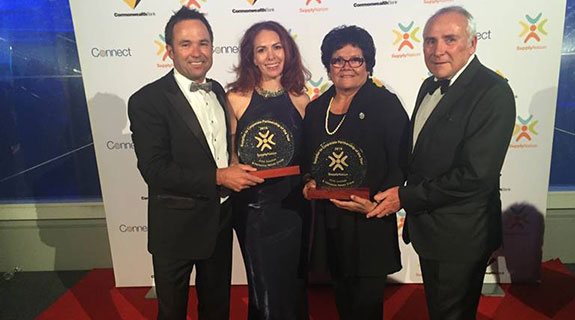 Mine camp operators Compass Group and Sodexo, and an Adelaide-based print business that supplies Fortescue Metals Group were among the winners in the 2016 Supply Nation supplier diversity awards.

The corporate member of the year was Compass Group, which has established business relationships with more than 25 indigenous suppliers.

Compass, which trades as ESS Support Services Worldwide, has also undertaken to train and employ 1,050 additional indigenous Australians by December 2017.

Since the launching program in March last year, it has employed 435 indigenous people.

Another individual winner was Sodexo’s Wendy Dawson, who was named supplier diversity advocate of the year.

Earlier this year, Sodexo signed a $2.5 billion contract to manage all of Rio Tinto’s mine camps and other facilities in the Pilbara for 10 years.

It has also pledged to create 400 new jobs for indigenous Australians after becoming the latest company to join the federal government’s employment parity initiative.

“We’ve come a long way since then and we were very proud to sign a three year contract worth over $1 million last year,” Mr Nelson said in a statement.

“It’s about giving a ‘hand up’ instead of a ‘handout’ and to see Aboriginal business owners, like Print Junction, seizing those opportunities, delivering on their commitments, growing their businesses and employing local Aboriginal people demonstrates how the positive outcomes flow right through to the broader community.”

Print Junction managing director Leon Torzyn said the company has grown with this experience and appreciated the opportunities Fortescue have provided.

Supply Nation is a not-for-profit organisation that seeks to boost indigenous businesses through the promotion of supplier diversity.

It has more than 900 registered indigenous businesses and more than 200 corporate members.