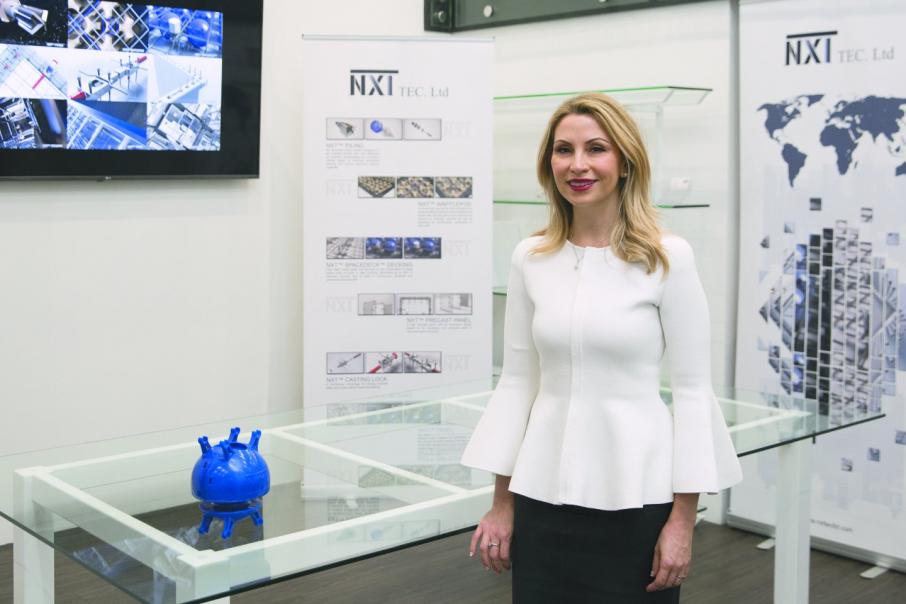 Natasha Di Ciano says the capabilities of the NXT system will be showcased at a demonstration project in Rivervale later this year. Photos: Attila Csaszar

The construction sector is among the worst performing in terms of productivity, according to a report undertaken by McKinsey & Company, which cited a failure to adapt to new technology as one contributing factor to the creation of a ‘sluggish innovation’ culture, with legacy systems and unique requirements for budgets, planning and operations seen as major hindrances to take-up.

Despite these barriers to innovation, national construction company Probuild is working to change the conversation and prevailing mindset.

In 2016, it developed the Probuild Construction System, employing engineers from the automotive industry to apply similar production methods to its own high-rise construction process.

This included working closely with suppliers to reduce wastage on site and changing the way workers and materials moved on site to increase efficiency.

He said benefits such as reduced waste, accelerated timelines and early handovers had already been seen on a number of the company’s projects.

In 2017, Probuild completed a 62-storey tower structure in Melbourne 69 days ahead of the contract timeline.

The system will make its debut in Western Australia this year on two of Probuild’s key projects – the Ritz Carlton and The Towers at Elizabeth Quay, and the NV Apartments on Murray Street.

“Some of us get stuck in our old ways, but it’s important to disrupt what we’re doing and challenge the thinking so that hopefully it translates to improvement in the bottom line,” Mr Delmenico told Business News.

“We needed to change what we were doing due to various supply chain pressures.

“And now it’s also a point of difference for our business.”

WA-based construction technology company NXT Tec is also aiming to challenge the status quo when it comes to building methods.

The NXT components are manufactured locally then transported to site, where the builder assembles (rather than constructs) them, allowing greater control over time, budget and quality.

This also redesigns the workflow, which Ms Di Ciano said meant labour could be reapplied in other areas to produce buildings faster.

The NXT technology can eliminate on-site wastage including concrete, as seen on traditional sites, and the system uses recyclable building materials, with panels containing integrated insulation to reduce energy consumption.

“The industry has seen little change in the approach or use of new technologies and buildings are largely constructed in the same way they have been for decades,” Ms Di Ciano told Business News.

“NXT facilitates the construction process from design to manufacture to delivery, controlling the entire process and all stakeholders, saving time and money.

“Globally, barriers to collaboration in construction have led to increases in price, waste and time as projects continue to be delivered through a disaggregated approach with many individual experts, suppliers and stakeholders lacking a systematic way to share information.

“NXT connects each stakeholder on a project, while the NXT Building System enables them to communicate in a common language.”

The patented system will be showcased on its first demonstration project at scale later this year with the development of the 10-storey Wyndham LUX Hotel in Rivervale.

NXT is currently under an early contractor involvement process with a building company for assembly on site.

Ms Di Ciano said the system had been used to build the NXT facility on King Street in the CBD.

NXT has already garnered international attention, and is currently in negotiations with a third party to export the technology to China.

It has also received strong interest from the Philippines, a market Ms Di Ciano said was ideal for NXT due to high construction demand, a low-skilled workforce and scalable projects.

That market was already exploring precast product systems, she said, but the present level of prefabrication was not mature, with products simply integrated as part of a traditional construction process.

Doric is also assessing options for shaking-up its construction process.

Chief executive Vince Mullholland said the team was leveraging China Wu Yi’s expertise and experience with modular construction and prefabrication construction to explore the potential use of these techniques on WA projects to benefit the speed of construction on site.

Building materials and systems aside, technology is also driving change in the practical, hands-on aspects of a build.

Georgiou Group chief executive John Georgiou said his team was able to speed up its project completion for a land development contract north of Perth when it installed Visionlink and Loadrite technologies onto 27 pieces of earthmoving equipment.

Visionlink allows builders to track the performance of each machine in real-time, while Loadrite is a scale that captures information of the loading process.

“Georgiou was required to relocate approximately 500,000 billion cubic metres of stockpiled fill from one location to another,” Mr Georgiou told Business News.

“The capture of this information enabled teams to quickly evaluate performance and adjust methodologies to deliver greater efficiencies and value.”

As a result, the project was delivered eight weeks ahead of schedule.

Another invention that could speed up project delivery and increase productivity is altCONNECT.

AltConnect is a connection that joins primary structural members such as beams and columns without bolts or welds, instead relying on friction to withstand loads and forces.

It was conceptualised by local company Yenem Engineering Services and is currently in the development phase.

Director David Meney said mining structures had made up the bulk of Yenem’s workbook since he established the company in 1995, with the idea for altConnect coming to him when observing construction progress.

“This will dramatically reduce the time of construction.

“It will be a game changer for the construction and mining industry,” he said.

Mr Meney said other potential benefits of the altConnect technology included lower costs due to reduced time on site, resulting in lower labour and hire equipment fees, and better access for maintenance as the system won’t require bracing.

Ease of installation and reduced fabrication errors were other benefits, he said, and as altConnect was 3D printed, components could be prepared to exacting tolerances so pieces could fit perfectly together during construction. 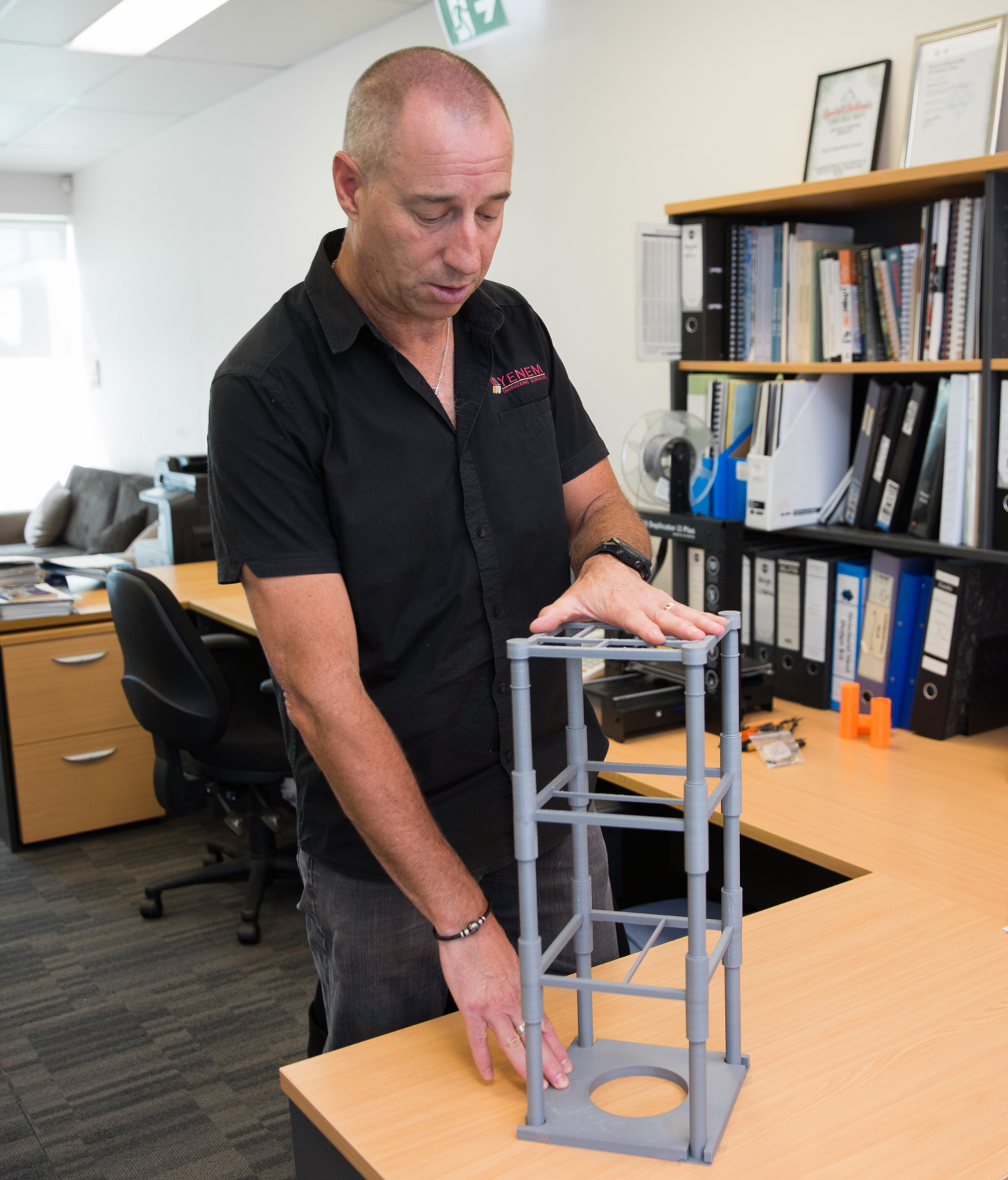 David Meney says AltConnect could dramatically reduce construction timeThe emergence of 3D printing has enabled Yenem to make altConnect a reality, with the connection between pieces to be printed in steel in order to provide the strength needed to withstand loading.

If the connection was to be used beyond the construction industry it could be printed in materials such as plastic, Mr Meney said.

“Current technology limits the size of steel components but additive manufacturing technologies are continually being improved and the available build space in all systems will certainly continue to grow, changing the way we make and build things,” he said.

Mr Meney said he was currently looking to partner with a technology, construction or mining company to take altConnect to the next stage – real-life scaling, backed by funding and then eventual commercialisation.

“We’re now at the beginning of a brand new way of creating steel that doesn’t have to be conventionally fabricated or machined,” he said.

“That’s what has got me excited about getting the idea patented, talking with software suppliers so we can actually make it possible for people to design structures using our connection and actually document them for manufacture and of course finding people in the industry that thinks it’s a good idea.”