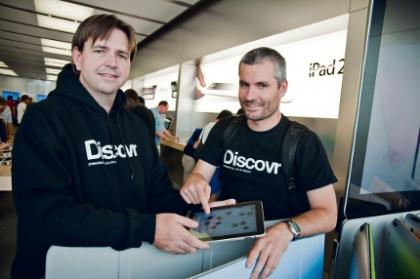 Stuart Hall (L) and Dave McKinney are profiting from the popularity of the Discovr iPhone and iPad applications.

The newest app completes a trilogy from the company which released Discovr Music in January and Discovr Apps in July.

The company hit 1 million downloads in September, and have added another half a million since.

The apps work to recommend similar music, apps and movies to iPhone and iPad users based on their personal tastes.

Both Discovr Music and Discovr Apps have held the number download spot in numerous countries around the world.

Filter Squad said it had been a big year for the company, winning Best Mobile Startup at MIDEM 2011 in Cannes, as well as the Greatest Potential Award in the Australian startup competition Tech 23.

The company was also listed in Billboard Magazine's Ten Top Music Startups of 2011 and featured by Apple as one of the best music apps in their App Store Rewind 2011.