Oil and gas explorer Discovery Resources has announced plans to leave the resources industry through the purchase of the Canberra Casino. 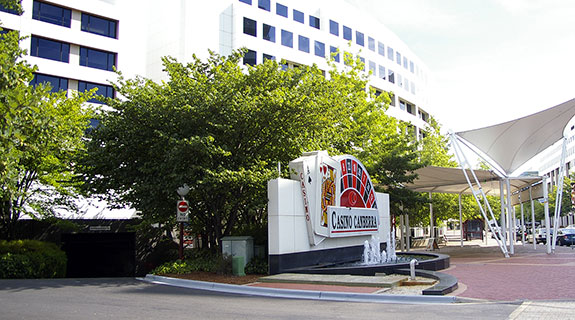 Discovery is leaving resources behind to take ownership of the Canberra Casino.

Oil and gas explorer Discovery Resources has announced plans to leave the resources industry through the purchase of the Canberra Casino.

Under the terms of the deal, Aquis Group will be issued all 163.5 million of Discovery’s shares and will be re-listed on the ASX under the name Aquis Entertainment.

At Discovery’s share price of 13 cents today, the shares are valued at about $21.2 million.

The transaction will result in Aquis Group owning 89 per cent of the company, with existing Discovery shareholders retaining the remaining 11 per cent.

Discovery will move its headquarters to the Canberra Casino offices and will become an entertainment business.

The deal is subject to a number of conditions, including Discovery completing a $2 million capital raising.

Aquis is wholly owned by Hong Kong businessman Tony Fung, who is also a major shareholder of Discovery.

Post transaction, the new company’s board will consist entirely of new members, with Mr Fung as chairman.

“Following completion of the transaction, the company will seek to implement a number of initiatives including a significant redevelopment of the Canberra Casino and consideration of other potential projects in Queensland and elsewhere,” Discovery said in a statement.

“Entities controlled by Mr Fung have granted loans to Aquis in order to fund the working requirements of Canberra Casino.

“In addition, Aquis will be permitted to seek further debt financing from Mr Fung and his controlled entities up to a maximum of $10 million in order to fund the working capital requirements and the short-term redevelopment costs of the casino.”

Settlement of the transaction is expected to be completed in early June.

Discovery shares closed 15.3 per cent higher at 15 cents per share.