The state government will need to decide whether it opts out of provisions to make housing more accessible. 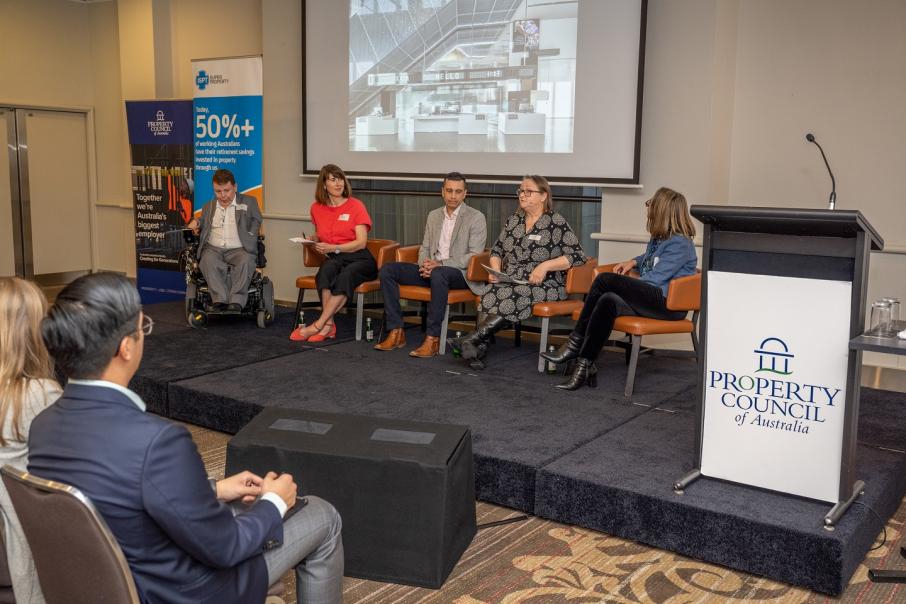 Justin Brown only measured the front door and inspected the bathroom before making the decision to buy his Dianella home.

Dr Brown, who is director of Centre of Learning and Teaching at Edith Cowan University and uses an electric wheelchair, told a recent Property Council of Australia WA Division sundowner of his difficulty finding a house.

“I didn’t look at the rest of it because I could get in [and] I could use the toilet because the door was wide enough,” Dr Brown told the forum, titled ‘Creating Inclusion in Our Spaces and Places’.

While he could physically get into the house, Dr Brown still had to make about $100,000 in modifications to ensure it was liveable.

Every light switch had to be moved and cupboards had to be removed from the kitchen to allow his wheelchair to get close enough to the bench for him to cook.

Since the release of the voluntary Livable Housing Design Guidelines by Livable Housing Australia in 2010, it is estimated the proportion of new private homes built to the standards range between 5 and 10 per cent.

A University of Melbourne survey of people with mobility impairment found 73.6 per cent of respondents were living in housing that did not meet their needs.

But Dr Brown, and the 3 million other Australians living with a mobility or selfcare limitation (according to the 2018 Survey of Disabilities, Ageing and Carers), could have more options if Western Australia chooses not to opt out of new accessibility provisions being added to the National Construction Code 2022.

However, initial reactions to the code means change does not look promising.

At the end of April, ministers from each state and territory agreed to the inclusion of minimum accessibility provisions for residential housing and apartments in the National Construction Code 2022 based on the Liveable Housing Design Guidelines silver standards.

Most ministers decided that, while building costs may increase, a regulatory solution would have significant benefits to Australians who need access to homes with accessible features.

They also agreed that each state or territory would be free to determine how the new provisions were applied in their jurisdiction, to minimise financial impacts on the construction sector due to the COVID-19 pandemic.

The seven design elements in the silver level are: a step-free path from the street to the dwelling; at least one step-free entrance; internal doors and corridors that facilitate comfortable movement between rooms; a toilet on the ground floor; a bathroom that contains a hobless shower recess; reinforced walls in the bathroom to support the installation of grabrails; and stairways designed to reduce the likelihood of injury.

The Centre for International Economics compiled a decision regulation impact statement for the Australian Building Codes Board, which found the silver option did not provide complete accessibility because it did not require a shower on the ground floor level.

The report found the estimated average cost per dwelling for a separate house that adhered to the silver standards was $3,874, due to factors including a loss of space, costs associated with additional excavation works due to sloped lots and redesigning and rebuilding display homes.

The silver standards were the most beneficial and cost-effective out of all the options, although even they did not rate well in the cost-benefit analysis.

It said benefits, including the lack of carer-related and moving costs, and improvements to quality of life totalled $2.7 billion, while costs for construction, compliance verification and industry retraining costs, came to $8.6 million.

While this equated to a net loss of $4.1 million to the community, the report said the cost-benefit analysis was not the only input into decision-making.

The report also said the cost to the community of a lack of accessible housing was estimated to be between $3 billion and $6.7 billion per year.

A spokesperson for WA Commerce Minister Amber-Jade Sanderson said the government might implement measures to improve accessible housing in the long term but did not say it would adopt the accessibility provisions.

“The McGowan government understands the importance of increasing the stock of accessible housing in WA,” the spokesperson told Business News.

“While it is important measures are taken to improve the stock of housing with accessible features, the WA government, similar to all other states and territories, must consider broader factors such as housing availability and affordability, as well as the implications for the construction sector.

“The government continues to evaluate the potential future inclusion of minimum accessibility provisions for residential housing and apartments in the longer term.”

WA Senator Jordon Steele-John, who also spoke at the event, said it was important for groups such as the Property Council to use its influence to push for states and territories not to opt out of the provision.

He said there were obvious human rights arguments for making inclusive design mandatory, as well as ensuring there was housing to cater for an ageing population.

“We have a rapidly ageing population here in Australia and what this means is, over time, we will have more and more people who will need accessible and inclusive dwellings that were not born with a disability or acquire one over time,” Senator Steele-John said.

“It just makes good business sense to build your place and space so it is accessible and inclusive to people.”

Property Council WA executive director Sandra Brewer said that, given the organisation’s national body was currently reviewing the options, she could not comment on what position it would take on the plans.

However, Ms Brewer said the Property Council was committed to inclusion.

“It is important for the property industry that it continues to evolve and develop projects that consider disability at the design stage, consulting with experts and individuals with lived experience, to ensure members of our community are not excluded from participating simply because the built environment didn’t consider them,” Ms Brewer told Business News.

“Great projects think about our built environment and the diverse groups of people who call our buildings home.”

Master Builders Association of WA executive director John Gelavis was campaigning for WA to opt out of the code because of the extra costs it would mean for its members.

“We were opposed to the regulations that put productivity at risk and have a real potential to adversely impact our housing affordability.

“The costs to housing will go up if these provisions are made mandatory but we acknowledge we’ve got an ageing population and having accessibility in homes is important, it’s about getting that balance right.”

Some organisations that create public commercial spaces are going beyond compliance requirements to make their developments more accessible.

WA Museum Boola Bardip project director Trish McDonald said the new museum was built with a people-first approach and aimed to make a place that represented the whole community.

Three of the museum’s four entries don’t have stairs and one has a lift. It is also possible to walk through every level without needed to use stairs.

“We think it sends a strong visual message about what the museum is for,” Ms McDonald told the Property Council event.

Ms McDonald said the decision to provide greater access was also commercial, because the museum wanted as many visitors as possible.

The museum enlisted a community access and inclusion panel, which met four times a year to review plans and offer feedback.

“You have to ask people with disability how to build a space,” he said.

Dr Brown said people without disability often found it difficult to think of all the modifications that needed to be made.

“Even though people have the best of intentions, if you don’t have a disability, you will never build it right."