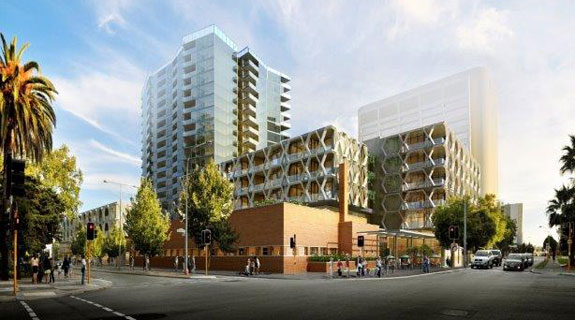 Diploma Group has re-joined the fray at the Metropolitan Redevelopment Authority’s Riverside precinct, being named preferred partner to develop the former Chemlabs site in East Perth. A development application is being prepared for a 16-storey tower, which will be lodged with the MRA once settlement of the site is complete.

The Chemlabs project will include restaurants, bars and office tenancies, with 75 per cent of the ground floor area to be open to the public, while the heritage-listed former chemistry laboratories will be converted into a 1,700sqm supermarket.

“Our aim is to create a mix of apartment types that will enhance the offering to potential residents, who will benefit from the convenience of the retail offerings at street level within the development,” Diploma managing director Nick Di Latte said.

“Diploma, together with its design team at Woods Bagot was able to develop a unique, visually pleasing innovative design which reflects the MRA’s vision for the site.”

The project will be developed in joint venture with Wingate Property, with marketing to launch in the third quarter of this year, and scheduled for completion during FY2018. The MRA announced earlier this month that demolition works of the non-heritage buildings at the Chemlabs site had commenced to pave the way for the new development.

Diploma’s Chemlabs project will not only complement the Queens Riverside precinct by Frasers, but also Lend Lease’s $1 billion Waterbank project, which is expected to be launched to market by mid-year after a series of delays.

Also in close proximity, international hotelier Accor is building a 228-room, 15-level Ibis Styles Hotel on the corner of Adelaide Terrace and Plain Street, opposite the Hyatt, expected to be complete in July.