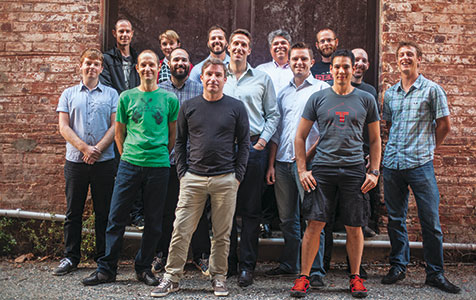 SOLID GROUND: James Wyper (centre) and the Digital Dialogue team are seeking to break into the US market. Photo: Attila Csaszar

Digital Dialogue’s innovative use of data and analytics has enabled it to gain a firm foothold in the local marketing sector.

The company was founded by Business News 40under40 winner Tony Loxton in 2009 and has grown to a team of 45 staff across three locations, including New Zealand.

Digital Dialogue is now attempting to break into the US market.

While the company has grown significantly in Australia – nearly doubling in size and revenue in the past year – it’s reached a point of constraint in the domestic market forced by businesses’ comfort with the traditional method of delivering marketing campaigns and analysing return on investment.

Digital Dialogue creates marketing campaigns, which are the bread and butter of traditional advertising agencies, and then goes a step further by utilising products developed in-house to analyse the effectiveness of those campaigns.

For example, it is able to see how a television advertisement translates into visits to a client’s website.

Its focus on data has won it business with the likes of Chrysler, Jeep and Automotive Holdings Group, and local businesses Lend Lease, Muzz Buzz and Summit Homes.

Under Mr Wyper’s watch, Digital Dialogue has grown from 25 staff at the end of the 2012-13 financial year to the current 45.

Mr Wyper said one of the major challenges with Digital Dialogue’s growth had been maintaining its workplace culture, especially as the company expanded geographically.

“If you double staff in a year it means that you have to be very specific about what your culture is as that team starts growing,” Mr Wyper said.

Key to maintaining that culture has been what Mr Wyper confessed was his near-obsession with communication.

“On a weekly basis I talk about communication, about people taking the time to not just email something but get on the phone or skype and talk to someone and have an interactive discussion,” he said.

“Through ongoing communication you have a greater chance of keeping that culture alive.”

Mr Wyper said Digital Dialogue also began benefitting from increased cash flow about two years ago (when its turnover increased by more than 500 per cent in one year) to employ the best people available.

“I guess it is a snowball effect where, by having the right people in the right positions driving their area of the business, it does generate business going forward.”