SPECIAL REPORT: There’s no doubt the boom has come to an end, but plenty of opportunities and projects remain in play. 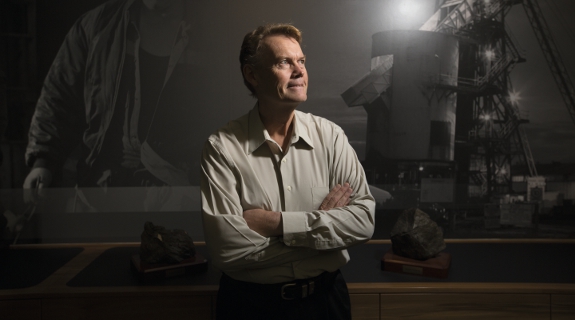 There’s no doubt the boom has come to an end, but plenty of opportunities and projects remain in play.

The value of mining projects under development in Western Australia has fallen by nearly 80 per cent in four years, according to BNiQ research, but there remains a wide range of smaller projects under consideration.

By the end of this year the last of the state’s mega iron ore projects, CITIC Pacific Mining’s Sino Iron, will be fully operational, while a decision is due at the end of the year from Rio Tinto on the proposed $1 billion expansion of its Silvergrass mine. 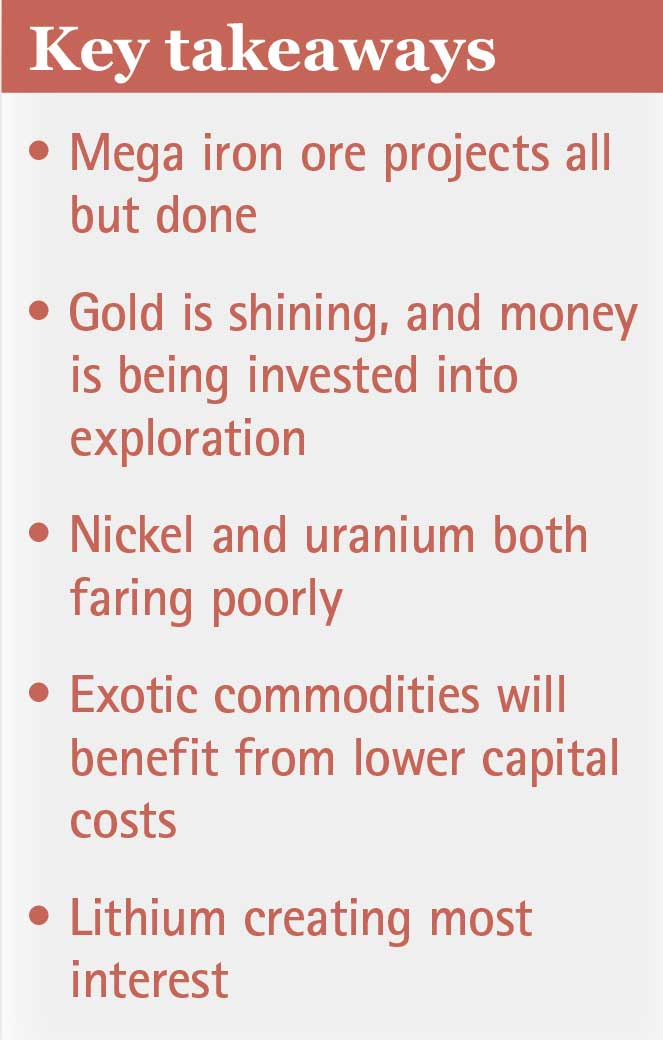 Lower prices and associated cost pressures are also putting the squeeze on long-term maintenance, with BHP Billiton Iron Ore, for example, stumping up $553 million for these ongoing costs in the first half of the past financial year.

Outside of iron ore, commodities such as nickel and manganese are also feeling the pinch, with at least three WA nickel mines and two manganese operations shutting down over the period, BNiQ research indicates.

The market also remains soft for players in the uranium space, with the spot price falling about 25 per cent in the past 12 months, although local hopefuls are doing all they can to shave costs in preparation for a long-foreshadowed upswing in demand.

The bright spots are in gold and technology-driven commodities, which are benefiting from strong demand and the reduction of costs across the industry. 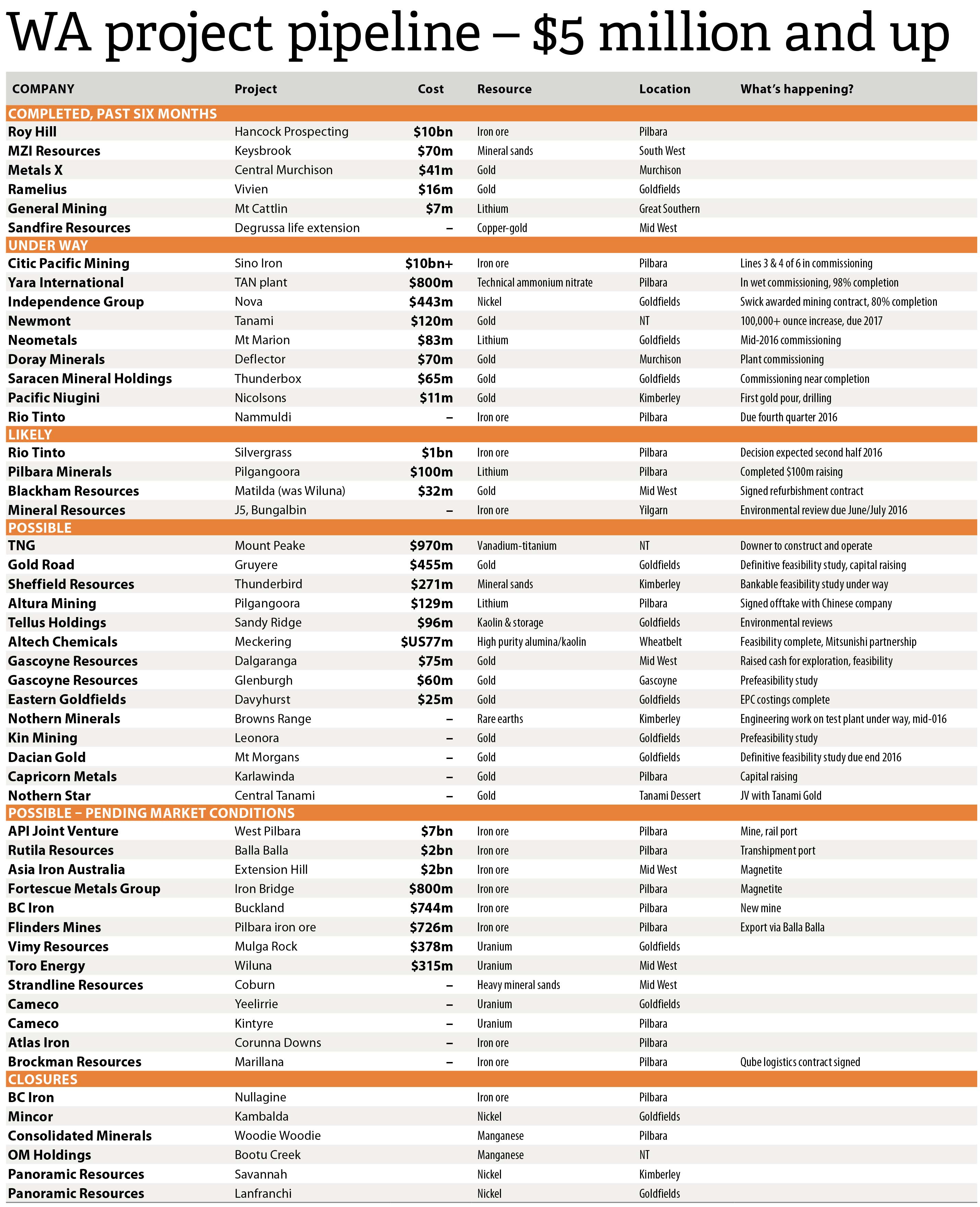 One of the largest projects under way is Independence Group’s Nova nickel mine, which recently passed the 80 per cent completion mark.

Early in its construction, Nova was running about $30 million below its forecast price of $473, million thanks to the industry-wide reduction in costs as the boom unwound.

Independence chief executive Peter Bradford said further cost savings had been achieved in the months since the takeover, which had been reinvested into the project to give improved options for scalability.

A further benefit of the slowdown was that it meant higher quality people and contractors were available for projects, he said, ensuring a better end result.

“We’ve now got some six to eight months of construction activity in front of us,” Mr Bradford said.

Independence has a handful of other nickel and gold mines, with the two commodities performing very differently.

“We’ve been in the commodities market for a long time, so we’ve had the benefit of seeing many cycles,” Mr Bradford told Business News.

“Even though base metals are under a little bit of pressure at the moment, based on history we’re going to see good times going forward.

“What’s been comforting is that we seem to have formed a bit of a floor in base metal prices.

Mr Bradford said there was starting to be some capitulation across nickel producers. However, both the company’s nickel mines, Jaguar (near Leonora) and Long (near Kambalda), were cash-flow positive.

At the Tropicana gold mine, where Independence has a 30 per cent holding in a venture with AngloGold Ashanti, production is lower due to planned reductions in grade, which affected March quarter revenue.

Mr Bradford has a bigger picture view, however.

“Our vision is to turn Tropicana into a multi-decade project,” he said.

“As a joint venture we’re spending about $30 million a year at the moment (on exploration).”

The sustaining capital budget is a similar size.

It’s unlikely Independence will use Gold Road Resources’ Gruyere deposit as part of that strategy, however, having sold down its 4 per cent stake in the company in recent weeks.

Mr Bradford said the distance from Tropicana was such that there were few synergies between the two projects, and his development focus was on Nova. 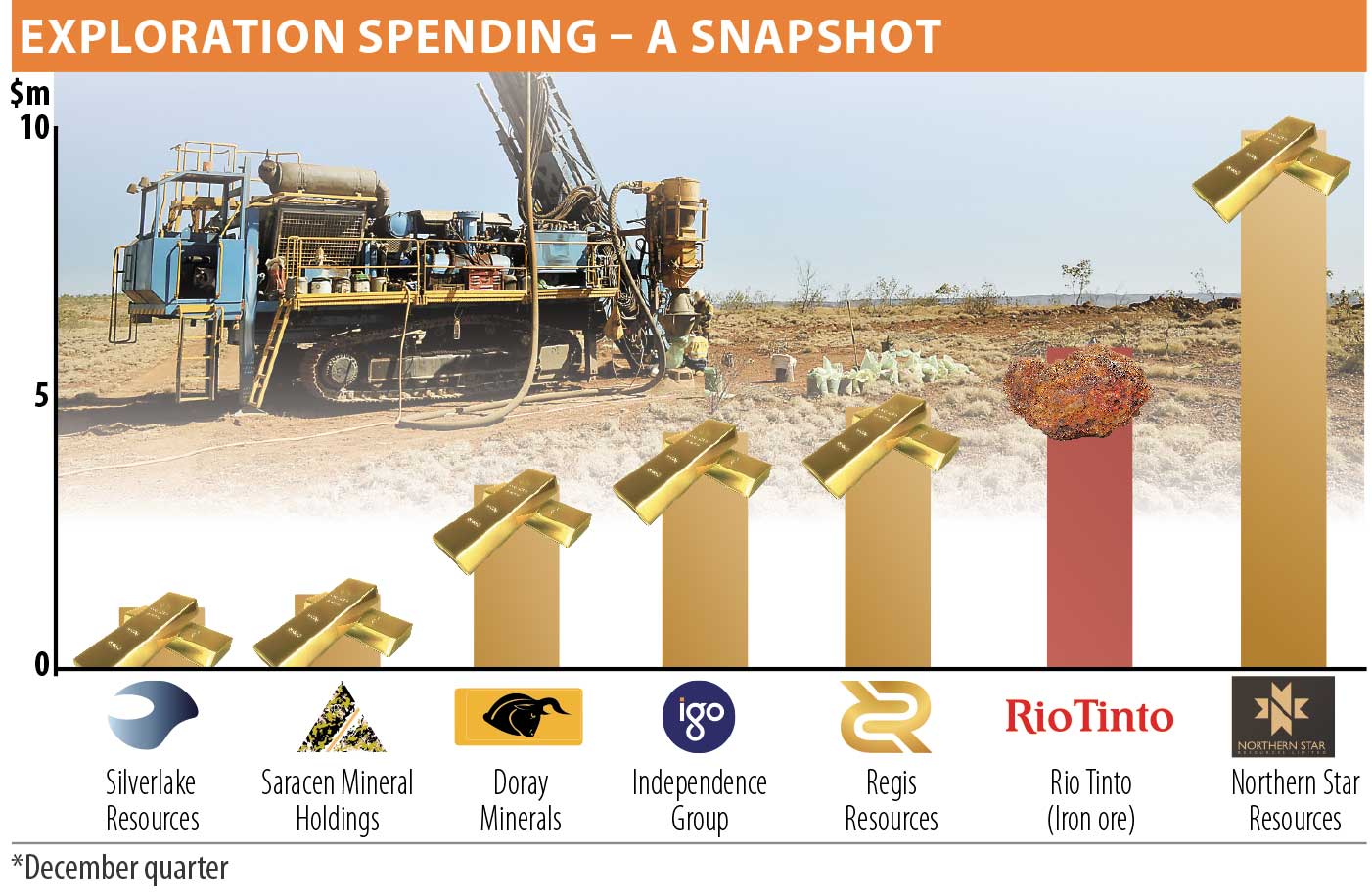 Northern Star Resources managing director Bill Beament said good margins were being made in the gold industry with a $1,600oz Australian gold price, while there was an upside benefit as the currency depreciated.

“We (the sector) started from a good base …. no-one really had debt, compared to the offshore majors and senior intermediates,” Mr Beament told Business News.

“Everyone’s doing a really good job on the cost front … the good thing about that is that people will start reinvesting it into the ground.”

However, a lack of exploration spending had been a problem in recent years, he said.

South African company Gold Fields would spend almost $100 million this year on exploration, according to Mr Beament, which he believed would be more than any other resources company in Australia, BHP Billiton and Rio Tinto included.

Northern Star would spend about $50 million, he said.

Mr Beament said Northern Star had put a lot of gold ounces on its books in the past year, which it was now crystallising into mine plans.

At the Central Tanami project in the Northern Territory, Tanami Gold is getting quotes for a plant refurbishment and securing permits, putting it in a position to push the development button mid-year.

Northern Star acquired a 25 per cent portion of the project last year, with a view to progressively taking its joint venture share up to 60 per cent if it meets funding commitments. 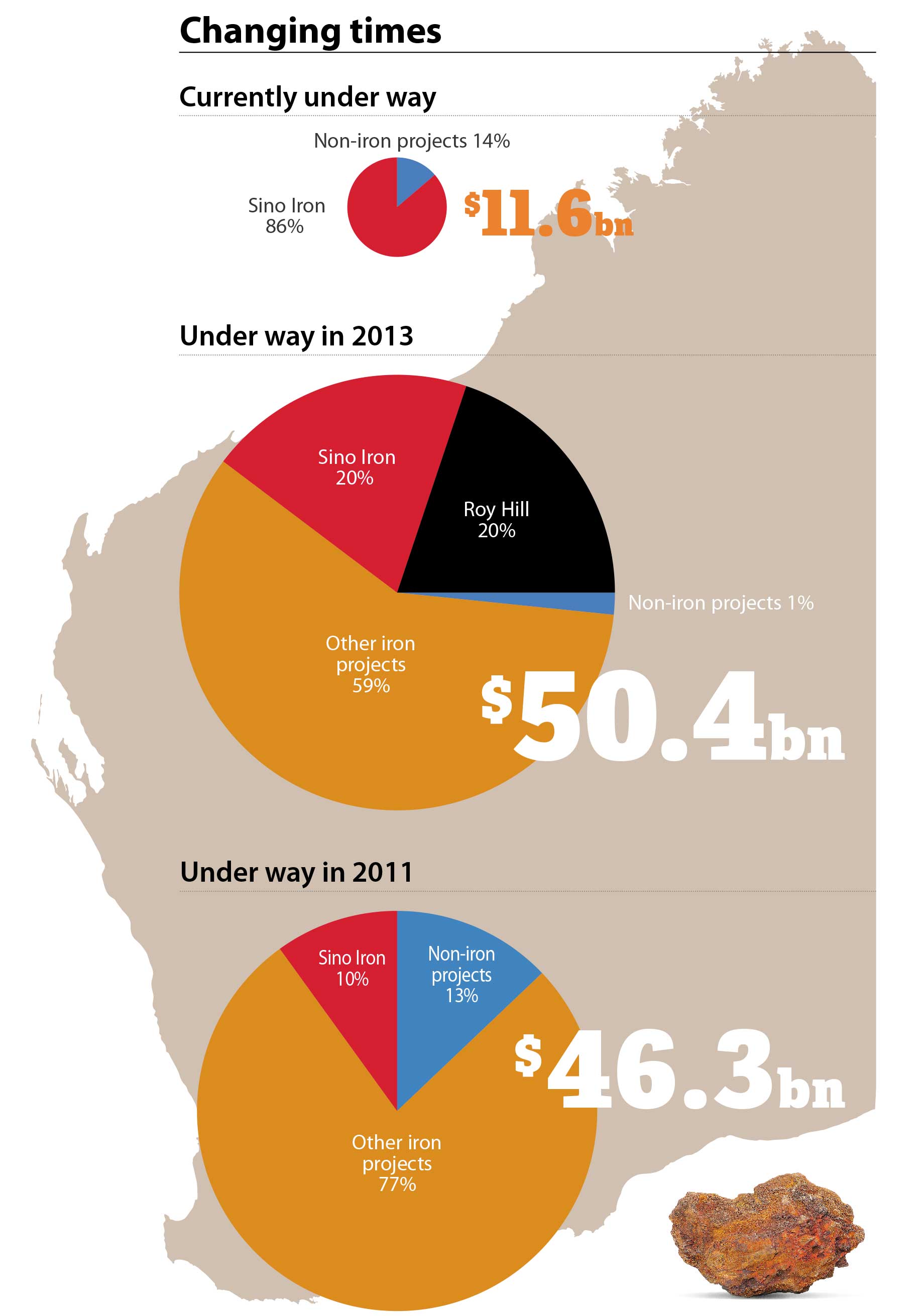 The last of this round of the state’s mega iron ore projects is nearing completion at Citic Pacific’s $10 billion Sino Iron project, 100 kilometres south-west of Karratha.

Citic chairman Chang Zhenming said there had been significant progress at Sino Iron in 2015.

“Lines three and four entered commissioning in the last quarter, and production and export of magnetite iron ore concentrate from the first four lines continued to ramp up,” he said.

“I’m pleased to report that construction of the remaining two lines is nearing completion, with commissioning targeted for the first half of this year.

Like most players in the iron ore export game, all eyes will be on achieving low-cost production when the construction phase ends.

“As we transition from construction to operation, our challenge will be to enhance the performance of the lines, lower production costs and improve efficiencies,” Mr Chang said.

He said the company planned to be the lowest-cost magnetite producer in the world.

One cost reduction strategy is the construction of an airport at the site, which will save on travel times for employees, who had previously needed to travel by bus from Port Hedland.

Enhanced integration of port and mine facilities is another front-of-mind concern, with the company recently receiving delivery of its second transhipper.

There are still hundreds of millions of dollars of sustaining capital works available for contractors, particularly from the big three players.

Yet costs are also being ratcheted down in this space.

The subdued activity in more economically significant commodities such as iron ore is shining a spotlight on the host of other resources produced across the state.

One example is ASX-listed Altech Chemicals, which signed an offtake deal with Mitsubishi for high-purity alumina from its planned Meckering project in April.

That alumina is a derivative of kaolin, a clay.

Tellus Holdings is planning a $96 million kaolin mine near Kalgoorlie, and is bolstering that by making the pit available for waste storage when mining is complete.

“We have a unique dual revenue income stream; that removes risk from the project,” he said.

“We dig an open-cut kaolin mine and we process and export the kaolin.

“The void left over from mining we use for the secondary revenue stream, which is the storage of waste materials predominantly from the gold mining region in the Kalgoorlie area.”

There had already been some interest among blue chip companies in the storage option, Mr van der Merwe said, while a kaolin market development agreement with Hong Kong ceramics trading house Asian Material Resources was signed in April.

The ceramics industry is the biggest user of kaolin.

It can fetch as low as $100 per tonne, while Mr van der Merwe said he expected the Sandy Ridge kaolin, which was a more premium product, would be worth about $600/t.

“We spent a few million dollars getting (the project to) here where we have sufficient confidence in the technical and commercial business case,” Mr van der Merwe told Business News.

Technological applications are driving demand for some commodities, including lithium, used in batteries.

Products such as the Tesla electric motor vehicle will be relying on lithium batteries to store power, in addition to the growing market for solar power storage batteries, leading to an expected dramatic surge in demand.

WA is already one of the world’s leading producers of lithium, with a further mine under development at Mt Marion, led by Neometals and Mineral Resources.

The company completed an $85 million placement to fund the project in April, and has a definitive feasibility study scheduled for completion by August.

Nearby, Altura Mining has a $129 million lithium projected lining up, with the company recently signing an offtake deal with Chinese Lionergy.

Altura is planning a definitive feasibility study for the third quarter and for development to commence before the end of the year.

Demand for rare earths is also linked to technological developments.

In that vein, Northern Minerals is developing a test plant for a project in the Browns Range.

For aspiring metals producer TNG, vanadium prices have recovered by more than 55 per cent from a low at the start of the year, although not to heights seen in early 2015.

That company signed a deal with Downer for development of its $970 million Mount Peake mine earlier this year, and followed that with an offtake deal with Singaporean Gunvor for iron products.

The long-predicted uptick in uranium prices has yet to transpire, however hopefuls are getting their houses in order for when the opportunity comes.

Toro Energy chief executive Vanessa Guthrie said there were large stockpiles throughout the industry’s supply chain that made it difficult to know when a price rebound would take place, but the fundamentals for demand remained strong.

That included a Chinese plan to build 40 new nuclear reactors by 2020 and build programs in India and the Middle East.

In the near term, Toro is working on paring back costs, with a target reduction of about 20 per cent.

Uranium contracts are generally taken out over the long term, with the spot market playing a minimal role in the industry.

As such, the anticipated price in three years’ time plays a big role in determining when projects will go ahead.

Production at the mine was two to two and a half years away at any point, Ms Guthrie said.