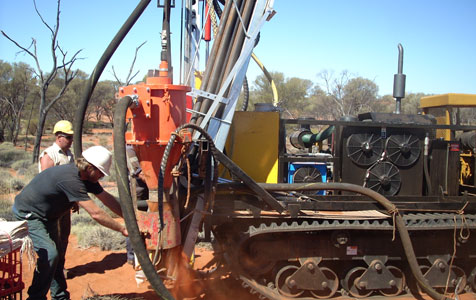 Drilling activities at the Cyclone deposit, north of Eucla.

Queensland’s Diatreme Resources has secured $2 million in backing from Hong Kong’s Perpetual Mining Holding for its potential $223 million Cyclone zircon project near Eucla, in the east of Western Australia.

Diatreme announced today it had signed a heads of agreement with Perpetual, which confirmed its intention to invest $2 million in the project in return for a 6 per cent stake.

The funds will be used to locate a suitable water supply for the operation, as well as the approvals required for access roads and mining licences.

Diatreme said it had discovered significant water flows beneath the proposed Cyclone mine area, with pump testing early this year set to provide it with a clearer picture of the operation’s planning requirements.

A pre-feasibility study for the project flagged a $223 million project cost for Cyclone, based on a 10-year mine life, producing around 147,000 tonnes per year of heavy mineral concentrate.

“The company welcomes Perpetual Mining's expressed co-operation over the project, along with their confidence in Cyclone becoming a major supplier to Chinese industry in the near-term future," Diatreme executive chairman Tony Fawdon said.

At close of trade today, Diatreme shares were steady at 2 cents.