Dialled in to medical opportunity

An enterprising approach to after-hours health care has brought rewards for Ilya Mayo. 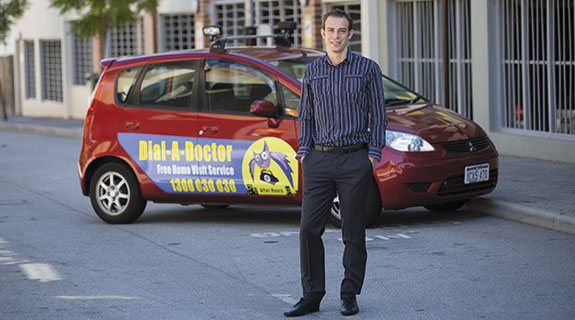 An enterprising approach to after-hours health care has brought rewards for Ilya Mayo.

Ilya Mayo has come a long way since the family holiday to Cairns, during which a personal emergency highlighted the growing demand for after-hours health services.

When his grandmother became ill, the family had no options other than a single, crowded after-hours clinic, or the local hospital.

Five years later and his business, Dial A Doctor, now operates in the increasingly rare bulk billing space and attends more than 70,000 house calls per year across Cairns and Perth.

Mr Mayo co-founded the business with his mother, Raya Mayo, several months after the trip to Cairns.

After making the move from his hometown of Adelaide, the first flyer drop resulted in media coverage and attendance to more than 20 patients per day within a month.

Two years after the Cairns launch, the Dial A Doctor owners were eager to apply the model to a larger population and, after extensive research, decided Perth would be the most viable option.

With the expansion in 2012 came the relocation of Mr Mayo to Perth, where he has remained to oversee the business here.

Growth followed Mr Mayo to Perth, with the business now operating out of bases in Jandakot and Balcatta, as well as its call centre and office in Cairns.

While its Cairns operation has experienced moderate growth year on year, the Perth side of the business has expanded almost 300 per cent in the past 12 months.

“There were all these challenges of the exponential growth that we had, which is exciting, but hard work at the same time,” Mr Mayo said.

The company has had advertised on television in Cairns for some time, but only recently launched its promotion on Perth TV.

The model is a first for Perth; while the city does have other after-hours care providers, they do not operate on the same model as Dial A Doctor, which employs doctors usually on a casual basis.

This allows them to submit their availability and work when rostered, with their supplies, car and medical assistant all provided by the business.

With a roster of around 100 doctors, 50 doctor assistants and 20 reception staff, the services are split into seven areas of Perth and extend 130 kilometres, from Alkimos to Dawesville.

The growth strategy for Perth is planned for six stages, Mr Mayo said.

“We did it in quite a staged approach because we wanted to make sure as we were growing our doctor numbers,” he said.

“We didn’t want to have … massive distances to cover and only two doctors on that night.

“That’s why we wanted to do one place, do it properly and have the right number of doctors to service it then open another section.”

At the peak times, usually public holidays and Sundays, all 16 Dial A Doctor cars in Perth can be in operation, with the teams of two on the road.

Mr Mayo said he had been approached a number of times from people looking to franchise the business and expand into other cities.

He said this expansion would occur, but roll out would continue to be strategic, utilising areas where such services do not exist or areas that are experiencing growth.

The 40under40 Family Business category winner is proof that keeping it in the family can be key to the success of a new business.

A qualified lawyer, Mr Mayo said working and owning a business with his mother, who is a doctor, provided an interesting dynamic.

“I think we’ve got different strengths in different areas,” he said.

“So where I’ve done a lot of the business coordination, systems design, bringing people on and building a team, she’s been very good at making industry contacts and (dealing with) the clinical side of the business, keeping our clinical care top notch.

“I think our front-line services is one of the best, we get a lot of positive comments come in.”