Development not a road to ruin

A creative approach to development could enliven vacant riverside places. 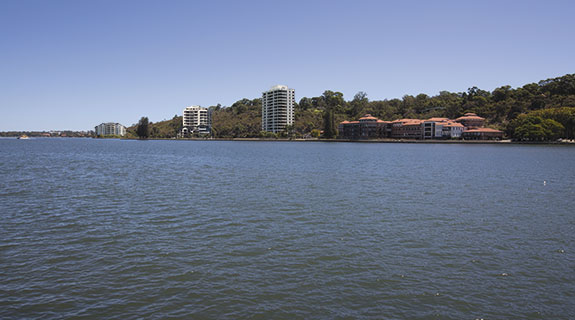 A creative approach to development could enliven vacant riverside places.

An ever-diminishing number of Western Australian residents will remember the days when the old Swan Brewery on Mounts Bay Road was lit up each night with two alternating images – a sailing ship and an ocean liner – etched in rows of lights.

It was a cute addition to our river and a highlight of any journey on the Kwinana Freeway, which, back then, started in the CBD and ended at Canning Bridge.

At some stage the lights were turned out and the brewery became a controversial ruin, before it was restored and expanded to the incredible, yet lonely, outpost it is today, the only riverside building on Mounts Bay Road between the city and Crawley.

I’ve always wondered how we managed to build roads along our river’s edges; I guess it was a matter of efficiency at the time.

Lately, as Perth’s residential apartment market has taken off, I’ve also wondered increasingly why we don’t build high-rise along locations such as these, where asphalt hugs the water.

The old Swan Brewery highlights the popularity of living or visiting such a location. Its only drawback is the adjacent four lanes of road.

The options for Mounts Bay Road would be to allow developers to build over the top of it, or downgrade the route to more gentle traffic and public transport, as well as making that riverside link more bike friendly.

Another transport opportunity would be to create the environment for more water-based commuting, perhaps from marinas that would be a part of each building or even landing sites within the structure. Covered parking doesn’t just have to be for cars.

I realise opposition to such development is likely to be significant. Building exclusive apartments, hotels or whatever else will be seen by some as privatising a public asset (the river). Some will bemoan high-rise simply for the sake of it, or because it removes their view of Kings Park.

Others will reject the loss of more roads for motorists already dealing with the cauterising of Riverside Drive in order to create Elizabeth Quay.

My answer is to make such development for the public good. Ensuring that public accessibility along the foreshore is maintained or improved in every case must be part of the planning. A significant part of the cost of each developer’s long-term lease ought to be put in a future fund to help pay for the maintenance and improvement of the waterway.

That a dusty little track to an old brewery emerged as major thoroughfare is a travesty of planning. But people want to live along our river and few arguments can be made that the views of car drivers are worth saving.

Who knows, maybe a cheeky developer will put lights on their building to make it look like a ship.