Public art plays a key role in efforts to increase vibrancy and liveability across Perth, with developers willing to contribute if it makes sense for their projects. 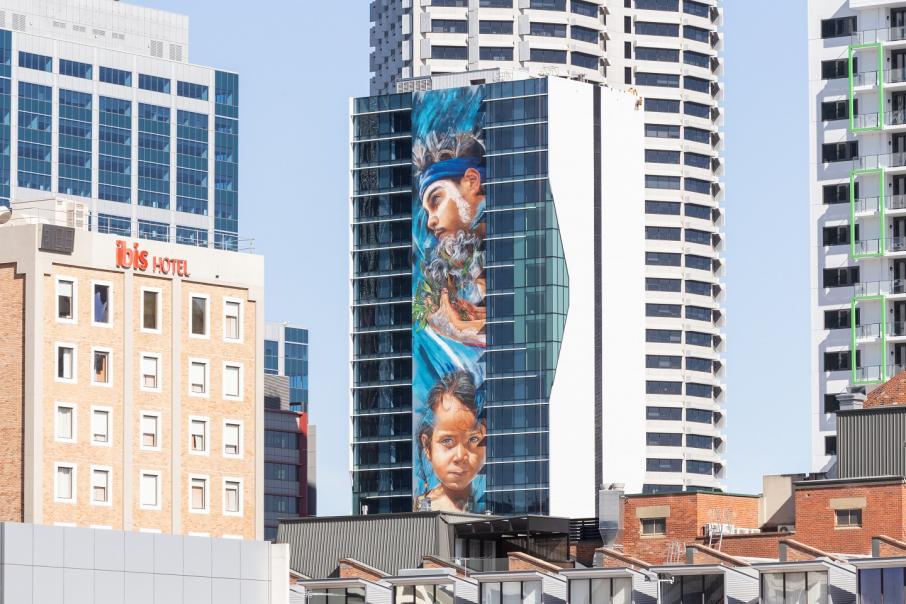 Recently opened hotel The Adnate is one of Perth’s most striking examples of a developer embracing a requirement to provide public art. Photo: Gabriel Oliveira

Public art plays a key role in efforts to increase vibrancy and liveability across Perth, with developers willing to contribute if it makes sense for their projects.

Soaring 27 storeys into Perth’s CBD skyline, The Adnate art series hotel is home to one of the city’s most ambitious and spectacular examples of public art.

The artwork is perhaps the city’s most prominent example of a developer going above and beyond local government requirements to contribute to public art as a condition of approval.

In Western Australia, many local governments have adopted public art policies that require developers to contribute to artworks if their projects exceed a certain construction value.

While the threshold for contribution varies across councils, developers are largely expected to contribute 1 per cent of their project’s cost to public art, either as a physical artwork on the development site, or a cash-in-lieu payment which the council uses to provide art elsewhere in the community.

But instead of viewing the condition as an impost on doing business, WA developers have embraced the requirement as an opportunity to establish a point of difference.

Urban Development Institute of Australia WA executive director Tanya Steinbeck told Business News developers were generally agreeable to putting public art into their project, as long as local governments could demonstrate a genuine need for it.

“We agree that the inclusion of public art into a development project is important, because it provides an aesthetic cultural and historical connection to a site and benefits the residents and people that visit it,” Ms Steinbeck said.

“But with any form of community infrastructure, if a local government makes a requirement for public art to be included within any project, they need to make sure that there is a clear need and nexus between what they are requiring and the development project itself.”

The City of Swan’s public art policy came into focus recently after national logistics giant Linfox applied to remove a public art contribution condition from its approval for a $60 million transport depot in Bullsbrook that is under construction.

In the City of Swan, projects that cost more than $2 million to build are subject to a public art contribution.

Linfox had argued that a late 2018 State Administrative Tribunal ruling that BGC Australia was not required to provide a public art contribution to expand its Hazelmere asphalt plant set a precedent that supported the removal of the condition.

However, the Metropolitan East Joint Development Assessment Panel did not share that view, rejecting the application at a hearing last week.

Linfox’s application, and the BGC SAT decision, asked the question of whether councils’ requirements for public art were a valid condition of development approval.

Ms Steinbeck said she would like to see local governments use more discretion as to whether to apply the condition, rather than take a blanket approach that all projects would be subject to it.

“What is appropriate for a residential development, where you have people using it for recreation and sport and kids play and things like that, that is a totally different scenario than an industrial precinct,” she said.

“Treating them both the same, I don’t think is necessarily appropriate.”

Outside of industrial developments, Ms Steinbeck said there were myriad examples of spectacular artworks being installed by developers across the city.

Ms Steinbeck said land developers such as LWP Property Group and Satterley had provided stunning art installations at their respective Ellenbrook and Catalina land estates, while Defence Housing Australia’s entry statement at the Liv Apartments in Fremantle was a best-in-practice example in high-density development.

“Some developers spend over and above the requirement because it is really important,” Ms Steinbeck said.

“It’s absolutely not something that developers shy away from, what they want is for it to be appropriate and relevant to the project that they are delivering.

“It’s one element that consumers are going to focus on when they choose one development over another, particularly if they are within a five-kilometre radius of each other.

“When a consumer is looking to purchase a new home, public art can be one of the factors that can push them over the edge.

“If projects are all on a fairly even playing field, these kinds of factors can make a real difference.”