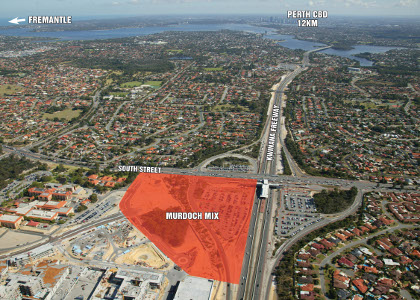 IN THE MIX: The development area between the train station and the under construction Fiona Stanley Hospital.

The state government is rolling ahead with its plans to develop 'activity centres' around public transport hubs, seeking developers' expressions of interest for eight hectares of undeveloped land between the $2 billion Fiona Stanley Hospital and Murdoch train station.

Lands Minister Brendon Grylls said there was potential for up to 220,000 square meters of development at 'Murdoch Mix', including commercial offices, allied health services, retail, residential and short-stay accommodation opportunities.

"LandCorp will use the ROI to gauge genuine interest from prospective commercial occupiers and developers interested in purchasing land in the precinct, which will assist project planning and help shape strategies to initiate development,” he said.

“It is good business sense for LandCorp to evaluate the private sector's level of interest for a development of this scale so close to first-class transport, medical and education facilities.”

The initial stage of Murdoch Mix will be released to the development market in 2012, with first sites available for development in late 2013/early 2014, state lands agency LandCorp said.

The project is expected to take 12-15 years for completion.

Development at the site was first mooted in the state government's long-term planning strategy, Directions 2031 and Beyond, which identified the area as a 'specialised centre', Planning Minister John Day said.

“This designation acknowledges Murdoch's strategic cluster of facilities, including the Fiona Stanley and St John of God hospitals, Murdoch University and Challenger Institute of Technology Murdoch Campus and underpins the future development of the Murdoch Activity Centre being planned as a new city centre for the southern corridor.

“With a forecast of 35,000 employees, the centre will have one of the highest employment levels of any area outside the Perth‟s CBD and potentially one of the country‟s most intensive non-CBD employment centres.”

Registrations of interest close at midnight on December 21.