More than $100 million worth of residential projects are emerging in and around the city fringe location. 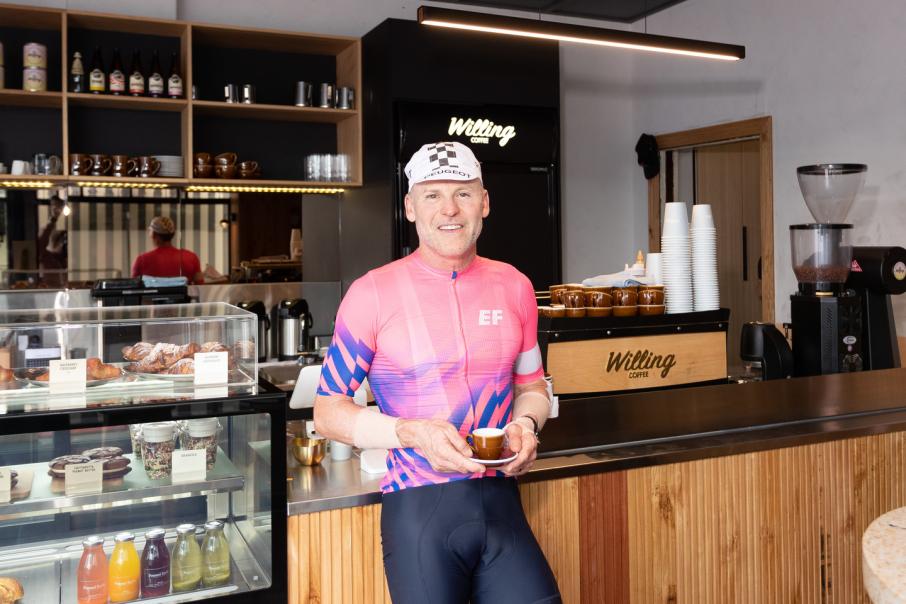 Tim Willing grew up on the same street as his planned 15-apartment project. Photo: Gabriel Oliveira

Given Tim Willing’s longstanding connection to Mount Lawley, the enthusiasm he projects for his business’s property development just off Beaufort Street comes as no surprise.

Adjoining an already-popular cafe (on the site of a redeveloped deli), the project will deliver 15 apartments and several small shops.

In the nearly 50 years since the Willing family has called Mount Lawley home, Perth has grown and sprawled, making way for new suburbs and shopping malls.

However, much of Beaufort Street has maintained its original village charm, anchored by a main street home to many family-run businesses supported by a well-established community network.

It’s that charm Mr Willing points to as a potential reason for why the area has piqued the interests of property players of late.

“Perth has been in the real estate doldrums for a number of years … the good thing about that is, as a developer you’ve had to think differently; the quality and the offer had to improve,” Mr Willing told Business News.

“My thinking [for Clifton & Central] had come from that niche village centre and how to recreate that … a way of life that never left Europe, with markets and fresh food etc.”

Mr Willing said those influences gave rise to the incorporation of 50-square-metre tenancies on the project’s ground floor, priced to attract independent small businesses, with a florist already secured.

“We don’t see ourselves as traditional property developers. This is our home, we’re deeply invested here and that’s the difference,” he said.

“Establishing the coffee shop and undertaking our own roasting was initially a love project. However, I quickly realised … I was able to tap in to community sentiment and gain a solid understanding of what the community wanted to see in terms of residential development and retail mix.”

That strategy has proved successful so far, with three shops and several apartments sold.

Cementing his confidence in the area, Mr Willing has another project planned on Field Street (see map), near the Astor Theatre.

Apartment living was a concept Mount Lawley (renowned for its character homes) and Perth more generally were slowly adapting to, Mr Willing said, but he hoped quality design and the need for diversity in housing choice would positively influence perceptions. 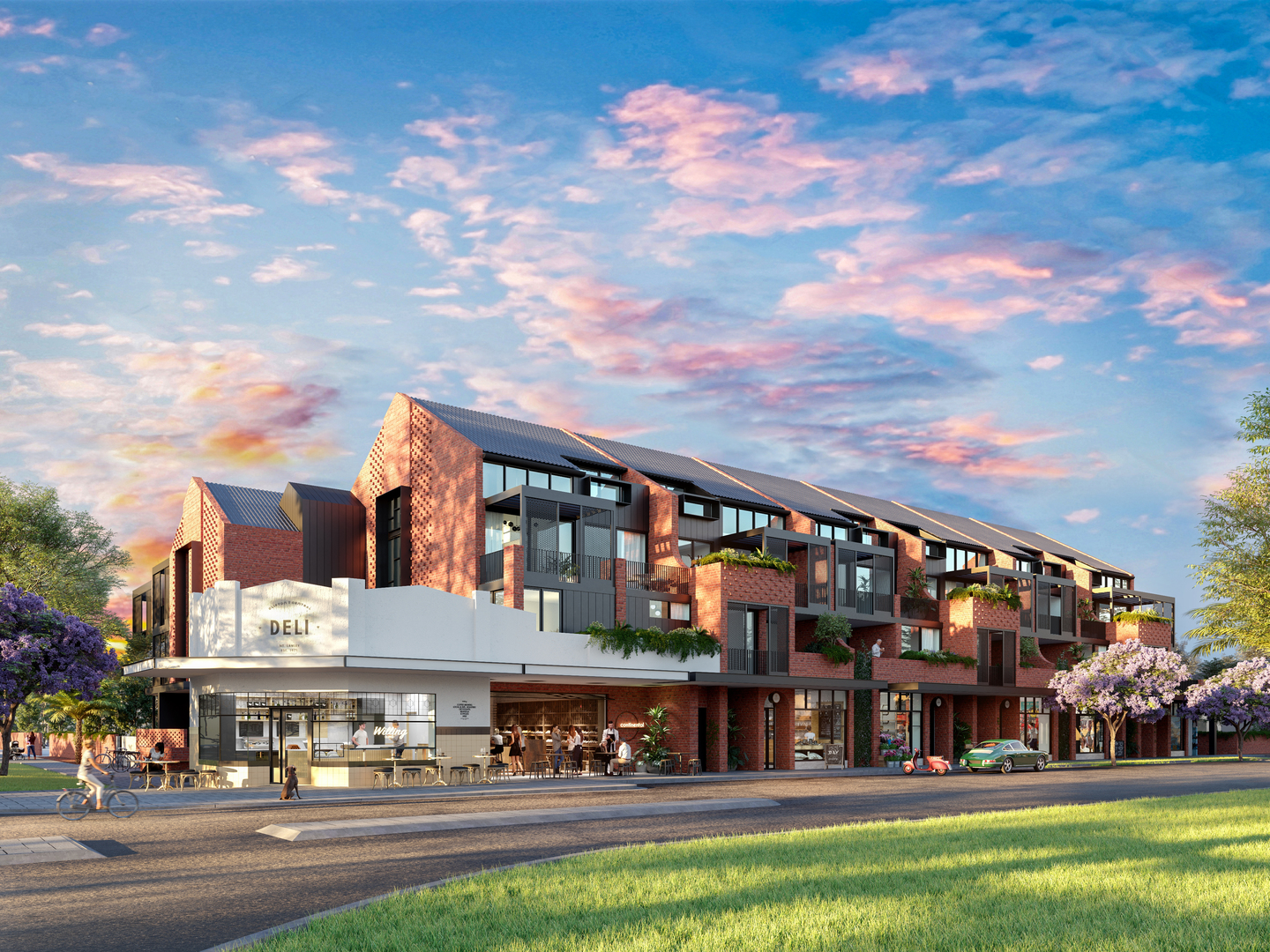 Mr Willing’s projects form part of a more than $100 million pipeline of residential developments under way or planned in and around Beaufort Street.

The $29 million, eight-storey project will feature 26 one- to three-bedroom apartments, two offices, four retail spaces and a refurbished drycleaners shopfront, as well as solar panels and rainwater harvesting technology. 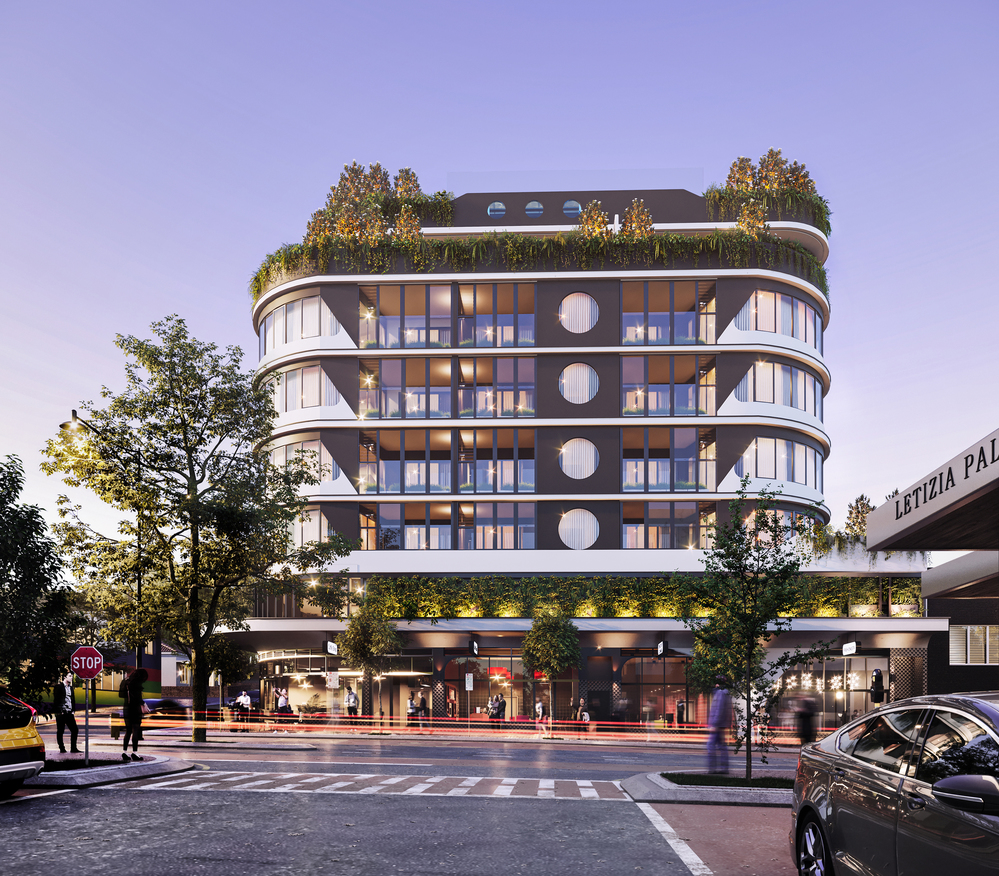 Construction has started on CHALLIS, named after the family who ran the site's original drycleaners in the 1950s. Image: Barry Baltinas

Mr Baltinas said Beaufort Street’s mix of tenants – fashion, food and entertainment venues – as well as its art deco architecture and public transport connectivity, made it a sought-out locale.

“All of this combines to create a highly-appealing lifestyle and means that, as a developer, we can be sure of strong demand from buyers, which helps ensure a successful project,” Mr Baltinas told Business News.

“Demand for downsizing in this location is continuing to grow, but land in the area is very tightly held and there’s a limited amount of real estate available right on the cafe and retail strip.”

More developments in the area could be on the agenda for Mr Baltinas, who said he intended to work closely with landowners to seek out future opportunities.

“We remain committed to the area, which we love and value,” he said.

I.Q Property and Projects real estate agent and land acquisition consultant Nick Di Lello said there’d been an uptick in interest in the area, and he was working with developers and architects to unlock the potential of a number of undisclosed sites along Beaufort Street.

“I think the appetite is going to grow when developers see other projects coming out of the ground; they’ll be watching to see levels of success,” he said.

Nicheliving managing director Ronnie Michel-Elhaj said more than half of the 58 apartments at the company’s Beaufort Street development, Sky Homes, had already sold ahead of construction starting in December. 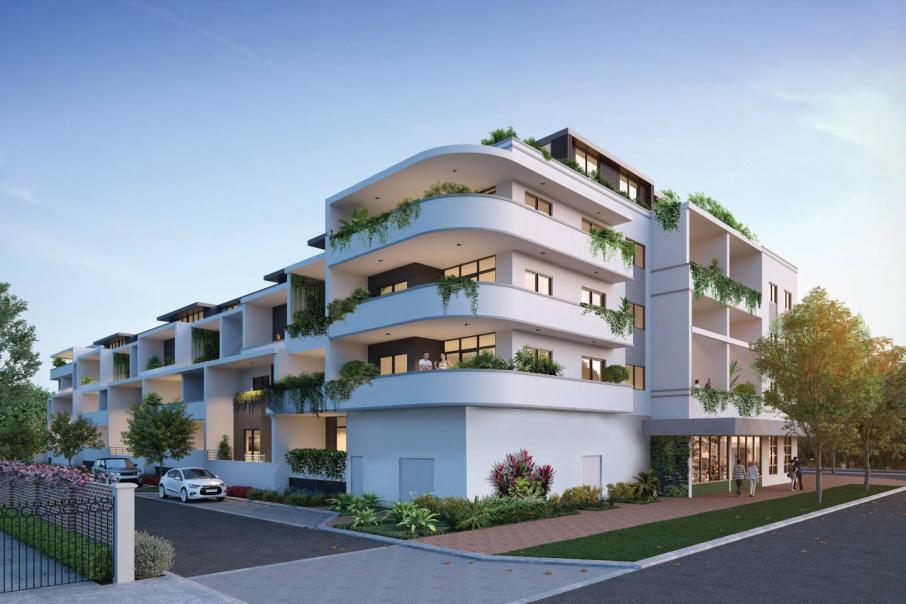 Plans call for Sky Homes, located at 939 Beaufort Street in Inglewood, to be 100 per cent powered by renewables via solar panels and a storage microgrid, with integrated smart technology and a customised app enabling residents to monitor their energy consumption, among other things.

Mr Michel-Elhaj said the development’s technology and sustainability features had appealed to buyers, boosted by the shortage of apartment supply in the immediate neighbourhood and its proximity to the cafe strip, new Woolworths, and Aldi.

At the other end of Beaufort Street, number 379, Serneke Australia has lodged a development application for a seven-storey apartment building, mostly constructed from prefabricated timber panels.

BOHO (Beaufort House) is a joint venture between Serneke and a private Sydney-based developer, and will feature 20 apartments as well as one commercial space. 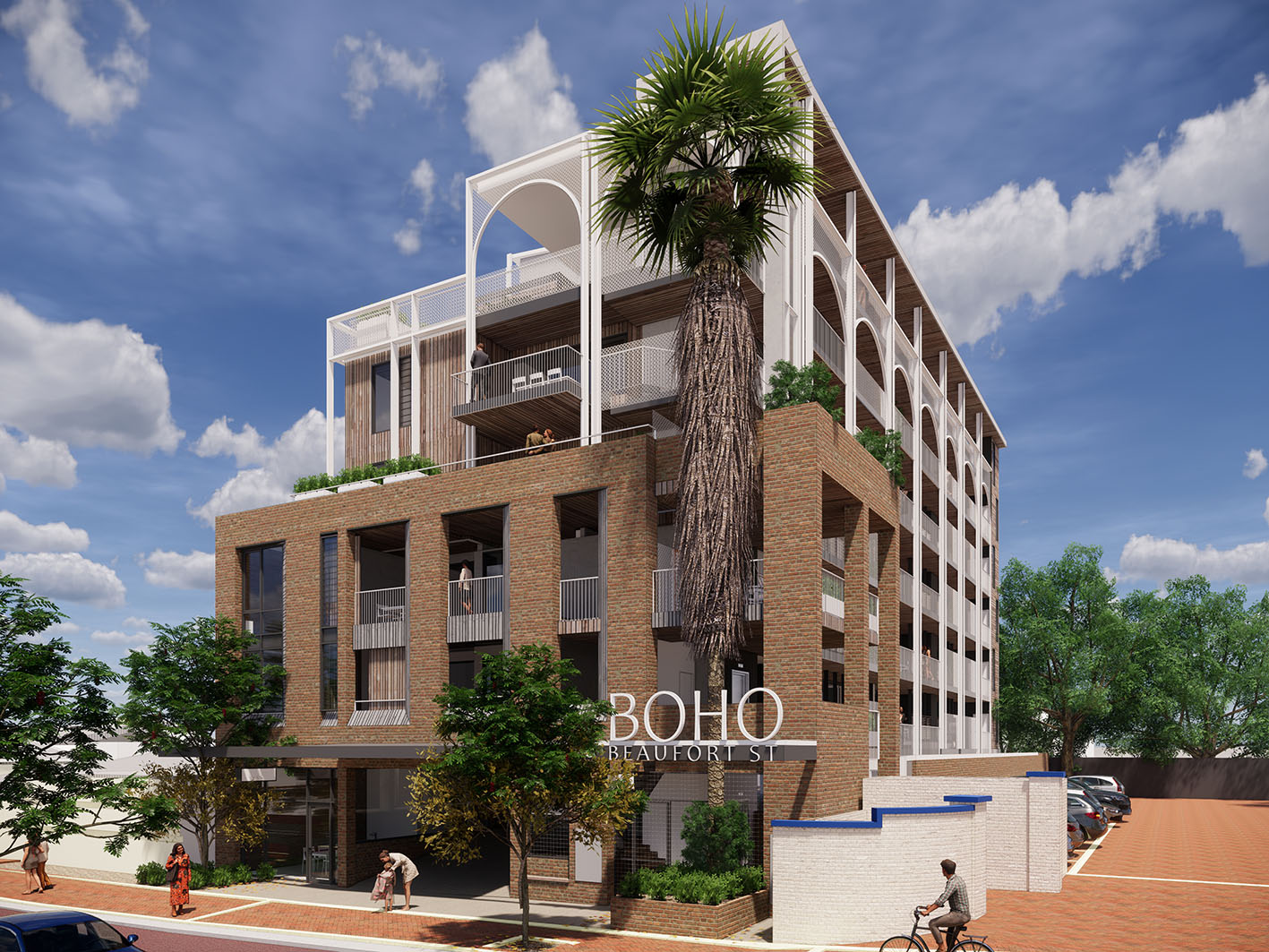 Serneke Australia managing director Andrew Abercromby said the group had a few sites in mind, with the street’s amenity, walkability and connectivity to transport key drawcards.

In 2019, the vacancy rate increased to 16.79 per cent, overtaking Rokeby Road in Subiaco as Perth’s neighbourhood strip with the greatest number of empty shops (18).

Mr Wilkins said data was collected by physical inspection of 442 to 677 Beaufort Street, with 2020 continuing a four-year declining trend by recording a 17 per cent vacancy rate, representing 18 shops (approximately 3,158sqm).

However, he said the strip had held up relatively well compared to last year, considering vacancies had jumped to 16 per cent from 12 per cent in 2018, and up from the 9 per cent rate recorded in 2017.

Other casualties include boutique Billie & Rose and homewares chain Empire, which closed its 1,230sqm showroom last year (that site is now for sale, with development potential for up to six storeys).

Colliers International is marketing the 3,517sqm backpackers site at 381 Beaufort Street, which could present another sizeable development opportunity. 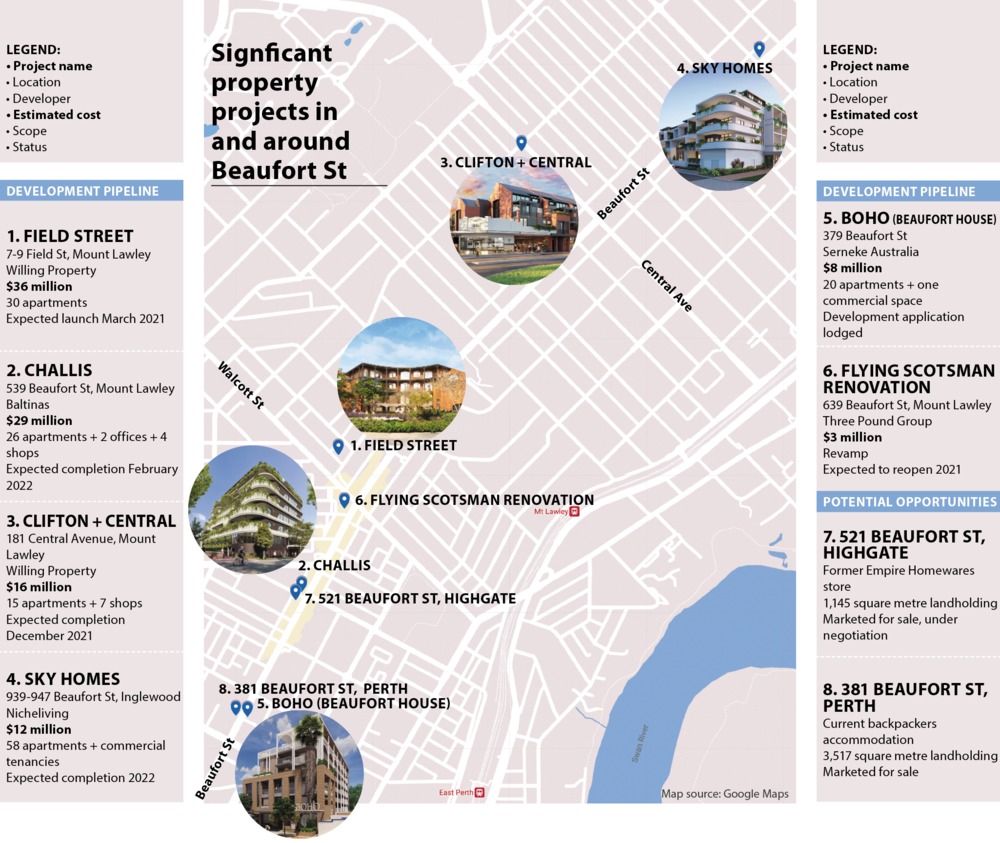 Local resident Joshua O’Keefe, the former chair of community group the Beaufort Street Network, said high rents had been one of the main challenges in curbing vacancies.

“No-one wants to reduce their rents … because it affects the valuation of their properties,” he said.

“But if you’re a startup fashion designer, the last thing you want to do is enter a five-year lease in this climate.”

Mr O’Keefe said he had been working with residential developers, including Serneke, on creating concepts for short-term or pop-up tenancies.

The community recognised the need for increased foot traffic, he said, and so had generally been receptive of the proposed developments.

“I think everyone is thirsty for development to come online … it’s a huge confidence boost in the area,” Mr O’Keefe said.

Last year, the City of Vincent and City of Stirling teamed up with the Beaufort Street Network to launch the Vacancy Project, which aimed to collaborate with landlords in rejuvenating empty spaces.

“We learned a few lessons; there were disparate needs and wants for those wanting to test out buildings and landlords wanting something more permanent,” City of Vincent Mayor Emma Cole said.

“In the meantime, we did a lot of work around relaxing our planning rules.”

That included streamlining ‘change of use’ applications, which could take up to 90 days before a business could open.

A Footpath Trading and Activation Policy was also drafted, to better enable businesses to leverage footpaths for street trading and alfresco dining.

“The Alexander building is undergoing a major refurbishment, the rebirth of the Scotto (the Flying Scotsman) will be huge for the strip, and the old Beaufort Merchant has been signed for a new Beaufort tavern.”

Next on the council’s agenda, she said, was the creation of more public green spaces along the strip, exploring the potential to turn part of Barlee Street car park, of which the council owns one third, into a town square.

“And when we see development going ahead, that’s a real positive sign.”